State Senator Lays Out Journey From Prof to Pol 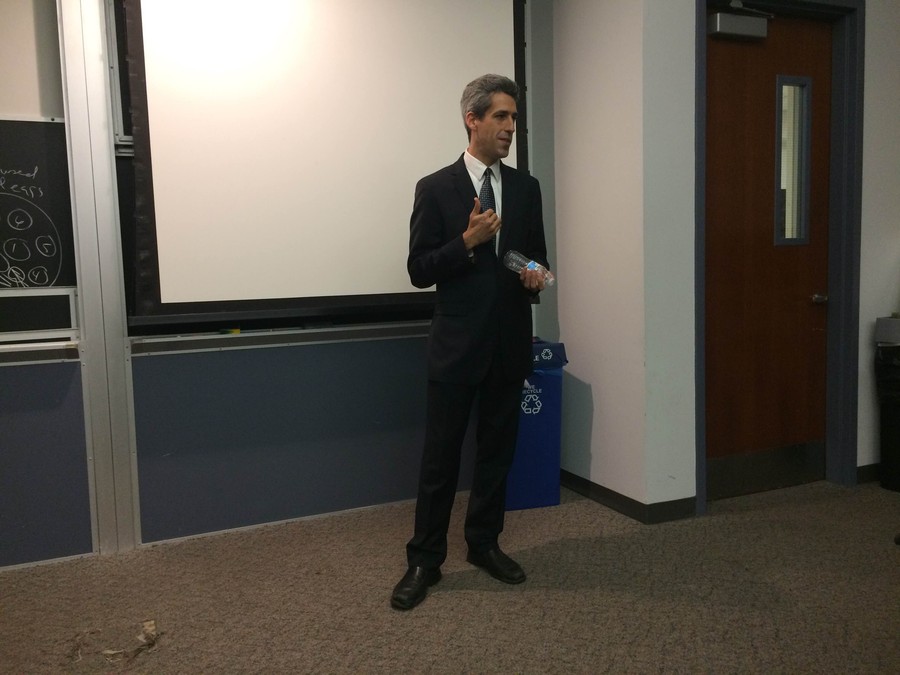 A former assistant professor of mathematics at the University of Chicago laid out his path from lecturer to legislator at a talk Monday.

Daniel Biss, current member of the Illinois Senate for the Democratic Party, discussed how his Ph.D. in mathematics from MIT helped propel his ascent, in the latest in a series of My Choice seminars at the Biological Sciences Learning Center.

In 2004, Biss happened to show up at a meeting for presidential nominee John Kerry. “It was utterly amazing. An incredible experience,” Biss said of the door-to-door campaign process. The event helped him realize that he perfectly fit the demographic of candidates for political office, as he was a passionate follower of politics and, he suggested, not completely crazy.

Riding a theory of increased democratic turnout resulting from the popular appeal of Barack Obama, Biss ran for the Illinois House 17th district seat in 2008. He lost. “I was an idiot, the whole thesis was wrong,” the mathematician said of his running strategy. “The whole underlying theory was stupid...I lost with 48.5 percent of the vote, which sounds like a lot unless the only thing you care about is whether or not it’s more than 50.”

Through a series of fortunate events involving help from other Illinois government officials, Biss was able to run for the seat again in 2010—this time winning with 55 percent of the vote. Since then, Biss said, “It’s been amazing. It’s been weird and frustrating, and it’s changed a lot.”

An audience question finally prompted Biss to address the value of a Ph.D. in public office, the stated topic of the talk. “I describe myself as a former mathematics professor, and that has a huge reputational benefit. It confers a kind of instant credibility,” Biss said. Though not much in the day-to-day life of a state representative requires his expertise in pure theoretical math, Biss notes that the experience of working on his degree has helped with focusing on long-term tasks and conducting extensive research.

The most important aspect of the Ph.D. in public office for Biss, however, is the ability to deal with adversity. “Doing a Ph.D. is, in most cases, not something that everything goes right the first time. That’s very useful.” Biss tied the academic training to his persistence after his loss in 2008.

The night ended with a Q&A segment in which Biss revealed that he has never taken a college stats class, detests  The Chicago Tribune , and realized that before his representative race he was overly cynical about the moral character of everyday people.

Due to an editing error, this article indicated that Daniel Biss had run and served as a Congressman. He ran and served in the Illinois House.