"They did despicable things to me," a torture victim said at the launch event. 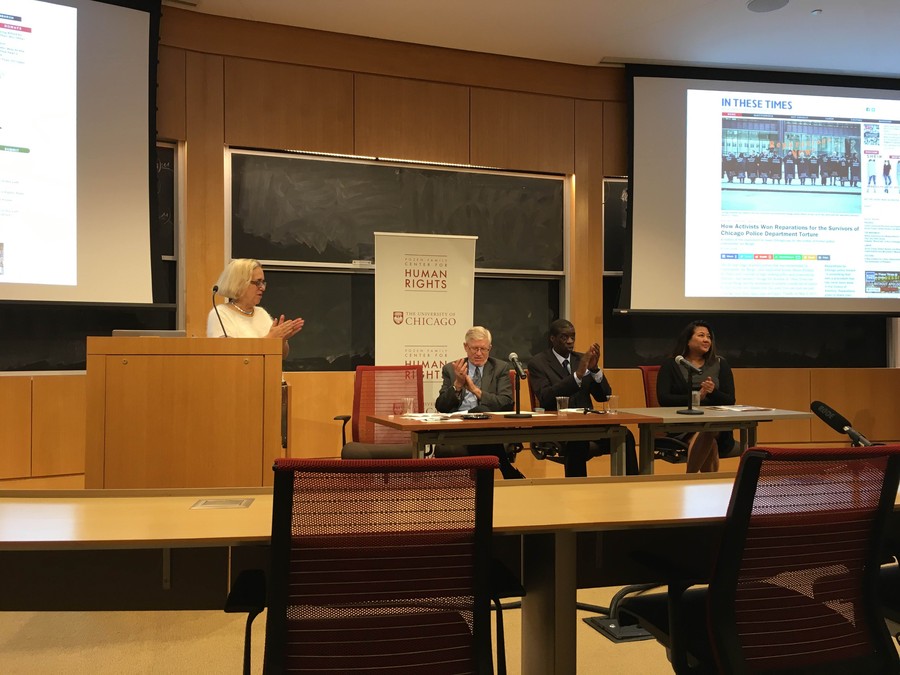 On Tuesday, the University’s Pozen Family Center for Human Rights launched an online archive of nearly 10,000 documents related to acts of torture committed by police in Chicago between 1972 and 1991.

Under the direction of Chicago Police Department Commander Jon Burge, Chicago police officers and detectives tortured more than 100 black men to force confessions. For decades, torture victims and their families, lawyers, and journalists rallied in activism and in legal action to bring justice to their cases. In 2015, the City of Chicago passed the historic and unprecedented Reparations Ordinance, which gave out millions in monetary compensation for torture victims and required the Chicago Public Schools to teach students about the torture cases and their legacy.

The People’s Law Office collected almost 10,000 files related to the interrogations, criminal and civil rights lawsuits, journalism, and activism that arose from the Chicago police torture cases. The documents will be hosted in an accessible and free archive created by the Pozen Center.

Gzesh opened the evening’s remarks and spoke about the center’s role in the creation of the archive. Before she introduced the three panelists, Gzesh expressed her hope that the archive will enable future generations of students, activists, and researchers to learn about the historical arc of torture and terror visited on black suspects.

"We hope this evening’s program can initiate a dialogue between the earlier wave of activists who brought us to this point in the Chicago police torture cases and new activists who have taken up the torch with the struggle for justice surrounding racism and police brutality primarily visited by the African-American community here in Chicago and across the country,” Gzesh said.

Gzesh then introduced Flint Taylor, an attorney who represented many high-profile police brutality and torture victims. Taylor is also well known for changing the narrative surrounding the murder of Black Panther activist Fred Hampton from a local shootout to an assassination orchestrated by the FBI.

In 2013, Taylor and the People’s Law Office collected and delivered the 10,000 documents to Gzesh at the Pozen Center.

“I did that because we at the office are and have been very self-conscious of people’s history—helping to fight for and to change the narrative around important struggles having to do with police violence,” Taylor said.

Taylor spent 30 years advancing disregarded stories from the victims of police brutality, to the point at which reparations and admissions from the City of Chicago was possible.

“I trust that we will continue to right people’s history and to change and continue to change the narrative so it conforms with the truth,” Taylor said.

Next, Gzesh introduced Darrell Cannon, a torture victim who spent thirty years in prison for a crime he did not commit. In his talk, Cannon detailed the torture he had endured at the hands of Burge and described his personal stake in the activism directed at the torture cases.

“For those of you who have a blurred image of what torture is about, let me give you a crash course,” Cannon said.

“I get mad when I talk about it. Even though it’s been a lot of years, I still get mad. Never hurt—I’m just mad. I stay mad because at the hands of some sadistic individual operating under the cover of law, they did despicable things to me.”

Cannon was taken to an isolated location where police officers, under Burge’s command, forced a shotgun in Cannon’s mouth and pulled the trigger. They carried out three mock executions, a torture tactic used to solicit a confession for a crime.

“They chipped my two teeth. They split my lip. And they didn’t do it with their fists or clubs, they did it with a shotgun. They took me to an isolated area, and before that day was over with I was willing to say my mother committed the crime even though my mother never even had a parking ticket. That’s how sadistic these individuals were.”

When Cannon did not confess to his alleged crime, the police officers hanged him by his handcuffs. Unsuccessful again, the officers then escorted Cannon to the backseat of a detective car where they used electric cattle prods to repeatedly shock Cannon’s genitalia.

“I’m standing here today because I was able to survive what they did to me, and I’m able to survive because God had bigger plans for me. And the plan was to be in a position that I am today, as a part of a movement that some said was impossible to achieve to get the city council to recognize that black men had been tortured at the hands of white detectives in the city of Chicago,” Cannon said.

Cannon believes his work is not finished. Often asked whether he is now content with the reparations and recognition, Cannon said he is restless because there are still people serving time in prison who have not been granted due process.

Finally, Gzesh presented the last speaker, Alice Kim, an activist and founding member of the Chicago Torture Justice Memorials project, an organization that uses art to document the history of Chicago police torture and seek justice for torture victims. Kim played a significant role in fighting for reparations.

“Chicago was transformed from a city that had covered systematic torture of African Americans by white officers into one taking unprecedented measures of redress from Burge torture survivors,” Kim said.

Kim discussed the history of the activism that made the 2015 Reparations Ordinance possible and imparted three lessons she learned from the experience. First, reparations didn’t come easily. According to Kim, it took decades to hold Chicago accountable for its law enforcement’s crimes. Second, Kim commended the centrality of the victims in the movement: people such as Anthony Holmes and Cannon who stood up to the status quo and took control over their own struggle for justice. Finally, Kim shared the importance of documenting this history in informing and inspiring the next generations of activism and change.