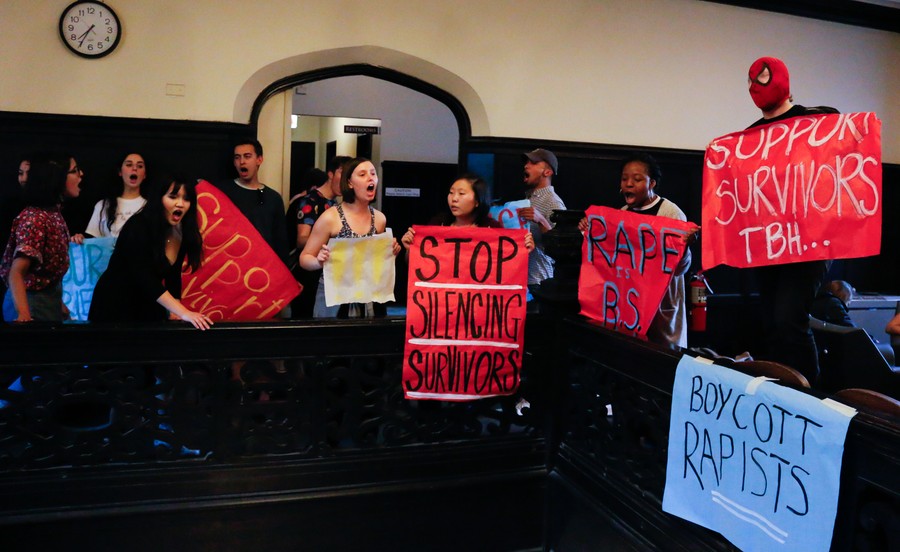 In May, students staged a protest in the Reynolds Club outside the opening night performance of a TAPS-sponsored play that was directed by the plaintiff.

The University of Chicago and a student suing it for anti-male discrimination in its pursuit of sexual assault investigations against him have jointly filed a motion to delay the case until that investigation has reached its conclusion.

The student, referred to as “John Doe” in court documents, sued the University in August, alleging that the University discriminated against him as a male in its investigation of two sexual assault allegations against him. One of those investigations, into a sexual assault that allegedly occurred the fall of 2013, is ongoing. The other complaint filed was decided in his favor in 2014.

“John Doe” is also suing the student whose complaint prompted that investigation ("Jane Doe"). His lawsuit says that she defamed him in social media posts that indicated that he had raped her.

"Jane Doe's" lawyer filed a similar motion shortly after "John Doe" and the University's joint motion was filed. If granted, it would move the date she has to respond to "John Doe's" complaint to January 10 as well.

Lawyers in the case will present their motion Monday morning, the day the University had originally been instructed to reply to the complaint.

Editor’s Note: Based on information available in now-public court documents, it is possible to identify the parties in this lawsuit. The Maroon chose not to identify them because “John Doe” is a plaintiff in a defamation lawsuit, and reporting his name might further this alleged defamation, and because “Jane Doe” alleges that she is a victim of sexual assault, and The Maroon, like many media organizations, does not report the names of alleged victims of sexual assault without the victim’s permission in cases when the victim’s name is not widely known.

By Anne Nazzaro and Adam Thorp

The case states that, in its treatment of the plaintiff, the University was “motivated by pro-female, anti-male bias.”