The leading campus organizations on both sides of the divestment debate last spring and the administration have condemned the posters. 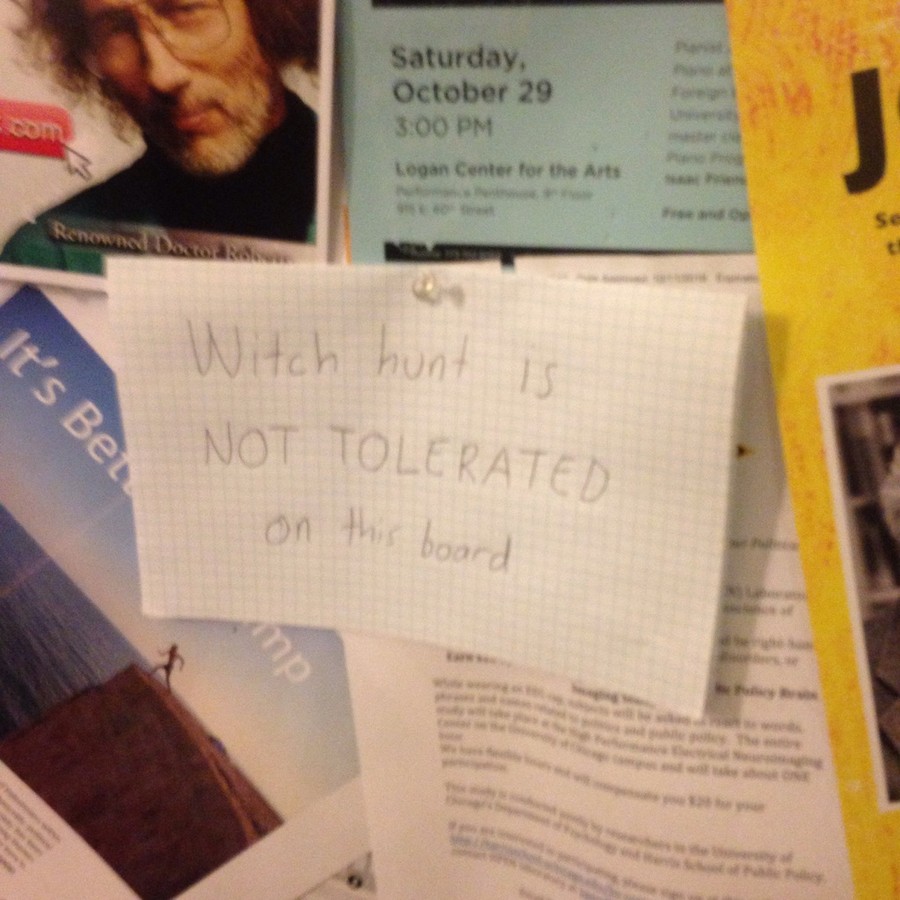 A sign reading "Witch hunt is not tolerated on this board" was posted in Cobb.

Posters were hung in campus buildings on Thursday morning listing students and alumni affiliated with Students for Justice in Palestine (SJP), the Muslim Students Association (MSA), Jewish Voice for Peace (JVP), and U of C Divest and associating them with terrorism and anti-Semitism.

The leading campus organizations on both sides of the divestment debate last spring and the administration have condemned the posters.

A University spokesperson said the posters are being removed as they are discovered.

“While the University of Chicago encourages the free exchange of diverse ideas and perspectives concerning a wide range of issues, these flyers are defamatory and inconsistent with our values and policies,” University spokesperson Marielle Sainvilus said.

The David Horowitz Freedom Center has claimed responsibility for hanging the posters, and sent out a press release Thursday morning.

“Our goal in placing these posters on prominent campuses across America is to expose the true motivations and allegiances of these groups who have chosen to join forces with terrorists,” David Horowitz, the founder of the group, said, “to challenge their lies and to expose the financial and organizational supports which allow them to pursue their genocidal agenda.”

David Horowitz, named an “extremist” by Southern Poverty Law Center, founded the Center for the Study of Popular Culture in 1988, with the goal of establishing a “conservative voice in Hollywood.” The name of the organization was changed in 2006. In 2007, the organization created a campaign to found a national “Islamo-Fascism Awareness Week.” Their latest poster campaign has targeted 10 schools that are on the “Top Ten Schools Supporting Terrorists” list by a website called stopthejewhatredoncampus.org. The University of Chicago is ranked sixth.

One poster listed 20 students and alumni involved with SJP, JVP, MSA, or U of C Divest and claimed they were affiliated with anti-Semitism and terrorism. All four groups supported a resolution that came before College Council last spring that called on the University to divest from 10 companies. Proponents of the resolution said these companies provided support for the Israeli occupation of the West Bank. One poster design included a caricature of a student at the University above the text “#jewhatred”.

The names were taken from the canarymission.org website, which creates public profiles detailing students’ support for the Boycott, Divestment, and Sanctions (BDS) movement.

Though the group has claimed responsibility for the posters, it is unclear who physically posted them. When The Maroon spoke with David Horowitz, he declined to name any individuals.

“I’m not going to tell you that,” Horowitz said, “These college administrations are coddling these terrorists. [The posters have] probably been torn down by campus administrators already. It’s a free speech issue. There is no law about campus posters. It’s a disgrace to the University. I take full responsibility for posting them.”

Since the posters were discovered by students on Thursday morning, several groups have released statements condemning them. SJP, MSA, JVP, and U of C Divest put out a joint statement on Facebook saying that they were “disappointed and alarmed.”

“We recognize that this is just one incident in a series of organized campaigns to repress pro-Palestine activity and education in the United States using scare tactics, threats and defamation, manifesting itself on campuses across the country,” the statement read.

J-Street and Coalition for Peace, which were both opposed to divestment in the spring, also released condemnations.

When asked his thoughts on organizations condemning his posters that were anti-BDS during the debate in the spring, Horowitz didn’t sound surprised.  “They’re scared. They’re intimidated and scared. This is why six million Jews were exterminated. Because they were scared.”

This article’s headline was edited to clarify that the posters did not definitively establish a link between any of the people referred to and Hamas.

The University is investigating.