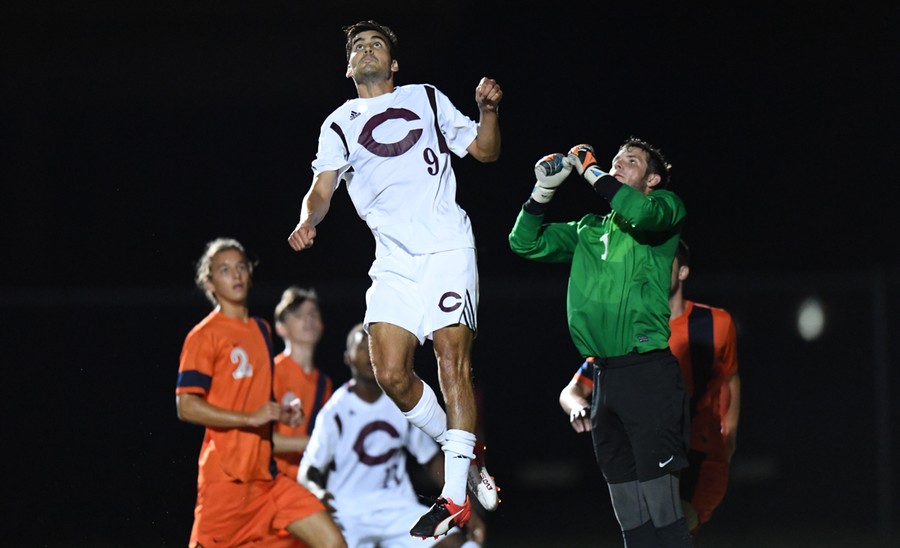 Second-year forward Max Lopez jumps to head the ball into the net.

The No. 1 Maroons were back at it again on Sunday, winning their match against Aurora University 3–0 as they celebrated Senior Day. The win was a perfect representation of how the season has gone for this dominant Chicago squad. The South Siders controlled possession most of the game, unleashing an offensive onslaught on the opposing team while simultaneously suffocating any counterattack the Spartans tried to muster.

The Maroons jumped out in front almost instantly. Just over a minute into the game, second-year forward Matthew Koh took a feed from fellow second-year Max Lopez and burst into the box. He then drilled a shot on goal and, even though the opposing goalkeeper managed to get a piece of it, the ball still found its way to the back of the net.

“I think it’s always nice to get an early goal,” Koh said about the quick start for the team. “I really think that yesterday we came out firing really well in the first 20 minutes, because we were all really excited for Senior Day and wanted to make sure all the seniors got their moment on the field.”

Just three minutes later, an Aurora penalty led to a Chicago penalty kick. Fourth-year forward Brenton Desai stepped up to the line and buried it, giving Chicago a commanding 2–0 lead early on in the game. Though the Spartans managed to keep the Maroons off the scoreboard for the rest if the half, they were forced to withstand a barrage of shots.

Desai added another marker in the second half when he capitalized on a feed into the box from third-year defender Stacey Reimann. The goal was his eighth of the season. Chicago ended up outshooting Aurora 25–3 over the course of the game as the offense was firing on all cylinders.

“During the week we worked a lot on our offense and supporting our front three more, and I think that helped a lot,” Koh said. “With a year of experience playing together under our belt, I think that our forwards and midfield are really clicking well together. We are playing unselfishly for each other.”

With the win, the Maroons improved to 15–0 on the season, but the occasion marked a bittersweet moment for the team’s six departing seniors.

“I'm happy that we got the win and that all the seniors got significant minutes, but I still can't believe I just played my last home game,” said fourth-year defender George Voulgaris. “This season has been something special and every player, both on and off the field, has played a significant role in our success.”

Chicago has three more games left on the regular season schedule and hopes to finish out the year undefeated. However, with its match against No. 21 Carnegie Mellon approaching this Sunday and No. 22 rival Wash U looming the weekend after, the road to victory will be anything but easy.

The Maroons face off against Case Western on Friday night and Carnegie Mellon on Sunday. Kickoffs are scheduled for 7:30 p.m. and 1 p.m., respectively.