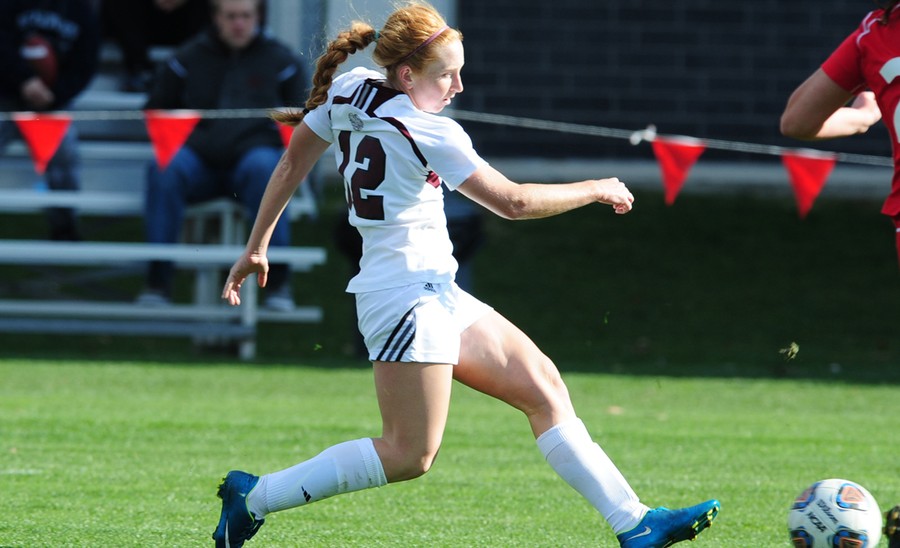 Second-year midfielder Jenna McKinney dribbles the ball past a defender.

The No. 7 Maroons scored four goals in the first half to defeat Concordia University Wisconsin 4–0 on the road Sunday afternoon. With the win over the Falcons (4–11–1), the Maroons (14–1–0, 3–1–0 UAA) tallied their fifth straight victory and finished their non-conference slate unbeaten for the first time since 2003—the last time the squad reached the NCAA tournament final.

Chicago started off its dominant offensive effort with six shots in the first ten minutes, including a header shot from third-year midfielder Mia Calamari just 22 seconds into play.

The Maroons continued to put pressure on the Falcon defense with a series of strong scoring chances before second-year midfielder Jenna McKinney finally found the back of the net at the 25:01 mark to put Chicago up 1–0. In the 28th minute, Calamari scored off a McKinney assist to give the Maroons the 2–0 advantage. Continuing the onslaught, the South Siders increased their lead again less than three minutes later when third-year defender Kaitlin Price finished inside the right post off a Calamari corner at the 30:38 mark. The final goal of the game came in the 40th minute when first-year forward Adrianna Vera tapped in a deflection off the Concordia keeper.

Despite a scoreless second-half, the Maroons kept the majority of play in Falcon territory and recorded nine shots in the remaining 45 minutes, two of which were on goal.

McKinney, who leads the team with 12 goals and 30 points, said of the team’s success, “Every girl connected super well with each teammate on the field, so our speed of play was fast and obviously effective.” She added, “Playing like that made for a super fun game and satisfying win.” Hopes are high that the team will continue playing with this sharpness and speed.

Since failing to score against Emory in their conference opener, the Maroons have been working hard to create and capitalize on their opportunities up front. The team’s 33 shots came from 14 different players, a testament to the depth and development of the Chicago roster.

For the third straight game and 11th time this season, the Maroon defense shut out its opponent. The Chicago goalkeepers faced just one shot in each half, both of which were wide. First-year Katie Donovan and second-year Patty Dull combined for the win in goal.

With three games left in the regular season, the South Siders have already recorded more wins than last year. The squad hopes to use these last few opportunities to improve its play and build upon its winning season before ultimately setting its sights on the NCAA tournament in November.

The Maroons look to maintain their momentum as they return to conference play this weekend taking on Case Western Reserve University (6–5–4, 0–2–2 UAA) in Cleveland on Friday at 5 p.m. EST and No. 16 Carnegie Mellon University (9–4–1, 3–1–0 UAA) in Pittsburgh on Sunday at 11 a.m. EST.