Eight protestors chained themselves together in groups of four to shut down Michigan Avenue. When police clipped the chains, protesters went limp as officers dragged them to a waiting police van.

Two University of Chicago students were arrested downtown at a protest demanding funding and free tuition at Illinois public universities on Monday.

Third-year Jessica Law and fourth-year Johnathan Guy joined eight other protesters blocking access to the intersection of West Adams Street and South Michigan Avenue, just outside the front entrance of the Art Institute of Chicago.

Dressed in blue graduation gowns and chained together in groups of four, the protesters stood in the road until police warned them that they would have to move, at which point they sat down. Several minutes later, police officers clipped the chains that connected the protesters together. Law, Guy, and most of the other protesters who blocked the intersection went limp as police officers dragged them to a waiting police van.

"They scraped my knee and broke my shoes when they dragged me to the wagon, and I have bruises on my wrists from them putting the cuffs on too tightly," Law, a first-generation student, said in an e-mail Tuesday morning. "As an young Asian woman, I am told and expected to listen to authority, be docile and passive to the world, and taking arrest was a way of confronting and challenging those narratives."

Around 22 University of Chicago students participated in the larger protest that led up to the arrests.

At around 4 p.m., a group of more than 50 protesters gathered in Congress Plaza. Protesters held signs reading “Students’ needs, not corporate greed” and “Make LaSalle St. pay, not the 99%,” referring to the center of Chicago’s financial district. Other signs showed the faces of Illinois Governor Bruce Rauner and hedge fund manager Ken Griffin. Griffin, one of Rauner’s largest donors, is a trustee of the Art Institute. 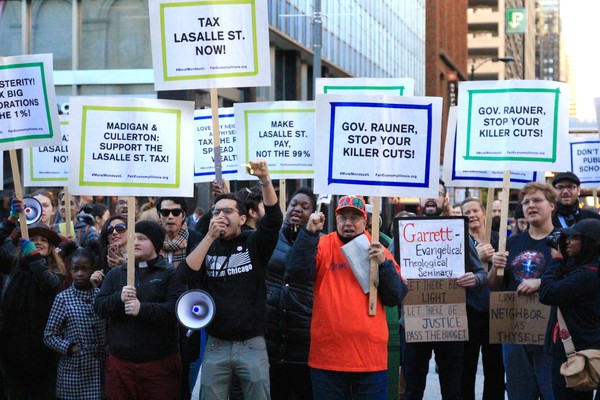 The protesters split into two groups to march to the site of the demonstration, which had been kept under wraps beforehand. One group walked east to South Wabash Avenue before turning north, while the other group marched along South Michigan Avenue. The marchers recited chants including “Education’s for the masses, not just for the ruling classes!” and “Say it ’til they got it, students over profit!” 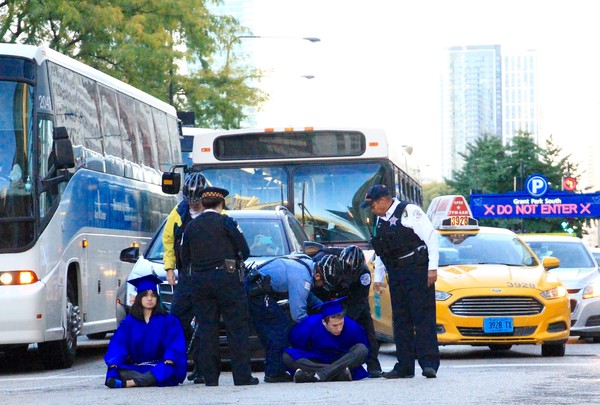 The protest organizers used a megaphone set on the sidewalk in front of the Art Institute to address the protesters standing in the intersection. Several of the protesters in graduation robes spoke about their experiences struggling to pay for higher education in Illinois, and called on the state government to solve the problems they faced. 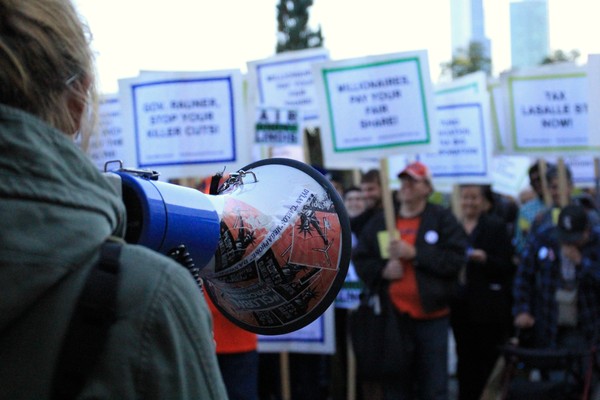 At around 4:45 p.m., a Chicago Police Department van pulled up behind the demonstration, and officers asked the protesters to clear the intersection. All of the protesters except the eight in graduation robes moved to the sidewalk and continued to chant. Just after 5 p.m., police began arresting the eight protesters remaining in the intersection, dragging several protesters who had gone limp to the police van by their arms. 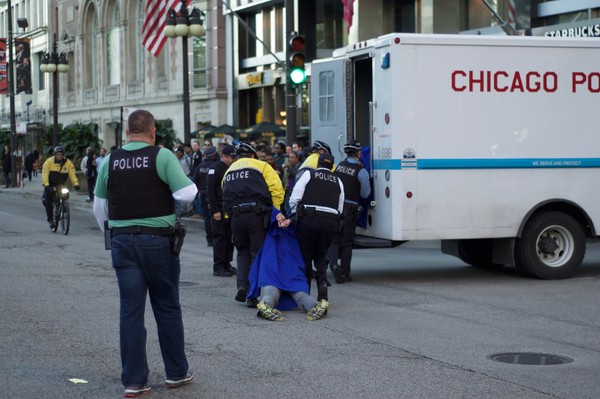 Event organizer Erica Nanton repeated the names of the students being arrested, and she led the remaining protesters in chants of “We got your back.”

Esau Chavez, a media liaison for the protest, spoke about the demonstrators’ motivations. “We chose the Art Institute because museum trustee Ken Griffin is one of the largest donors to Bruce Rauner’s agenda of austerity that has seen public cuts to higher education, K–12 education, social services, infrastructure, and so much more.”

The protest was organized by Fair Economy Illinois (FEI), a political activism group, as well as The People’s Lobby, of which Chicago Student Action is a member organization. The protest was part of FEI’s campaign to promote its People and Planet First Budget, under which Illinois would close corporate tax loopholes, enact a progressive income tax, and pass a tax on Chicago stock exchanges. The state government would use the estimated $23.5 billion produced to fully fund education, including free college tuition and a spending level of $9,000 per student in Illinois public schools, convert the state to environmentally friendly energy sources over the next 30 years, and implement universal healthcare. 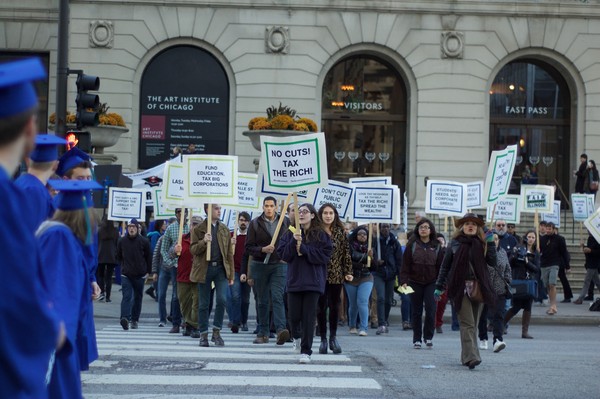 Student Government (SG) member Cosmo Albrecht voiced his support for the protest to The Maroon after a Graduate Council meeting Monday. “The action today represented a call to action on the part of our Republican governor and his billionaire donors to prioritize the needs of these students over the profits of corporations and the austerity agenda that the governor has been pushing for the last two years,” he said.

SG President Eric Holmberg had a similar stance. “They [wealthy Illinois residents like Ken Griffin] can find money to donate to the Art Institute or donate to Governor Rauner but they can’t find enough to make education accessible for every student. And that is not right.”

All eight protesters were released Monday evening. Law said in her e-mail that they were held for 6–7 hours at the station at 1718 South State Street.