Caps, gowns, rotary telephones, and at least one plush flamingo: If Kero Kero Bonito's Wednesday night show at Subterranean is anything to go by, then this is a recipe for collective effervescence.

For the uninitiated, Kero Kero Bonito—whose name refers to frogs and fish, or so I'm told—is the stage name of producers Jamie Bulled and Gus Lobban and lyricist Sarah Midori Perry. The group met through an online listing posted by Bulled and Lobban. In just three years, they've gone from being unknowns to being the mainstays of their own scene.

Like their hypermodern kin on Maltine Records and PC Music, the London-based trio doesn't capture a place or a space so much as a feeling: they are giddy, glossy, syrupy. Above all, they are fun: A KKB concert means sing-alongs, costume changes, and a menagerie of stuffed animals. 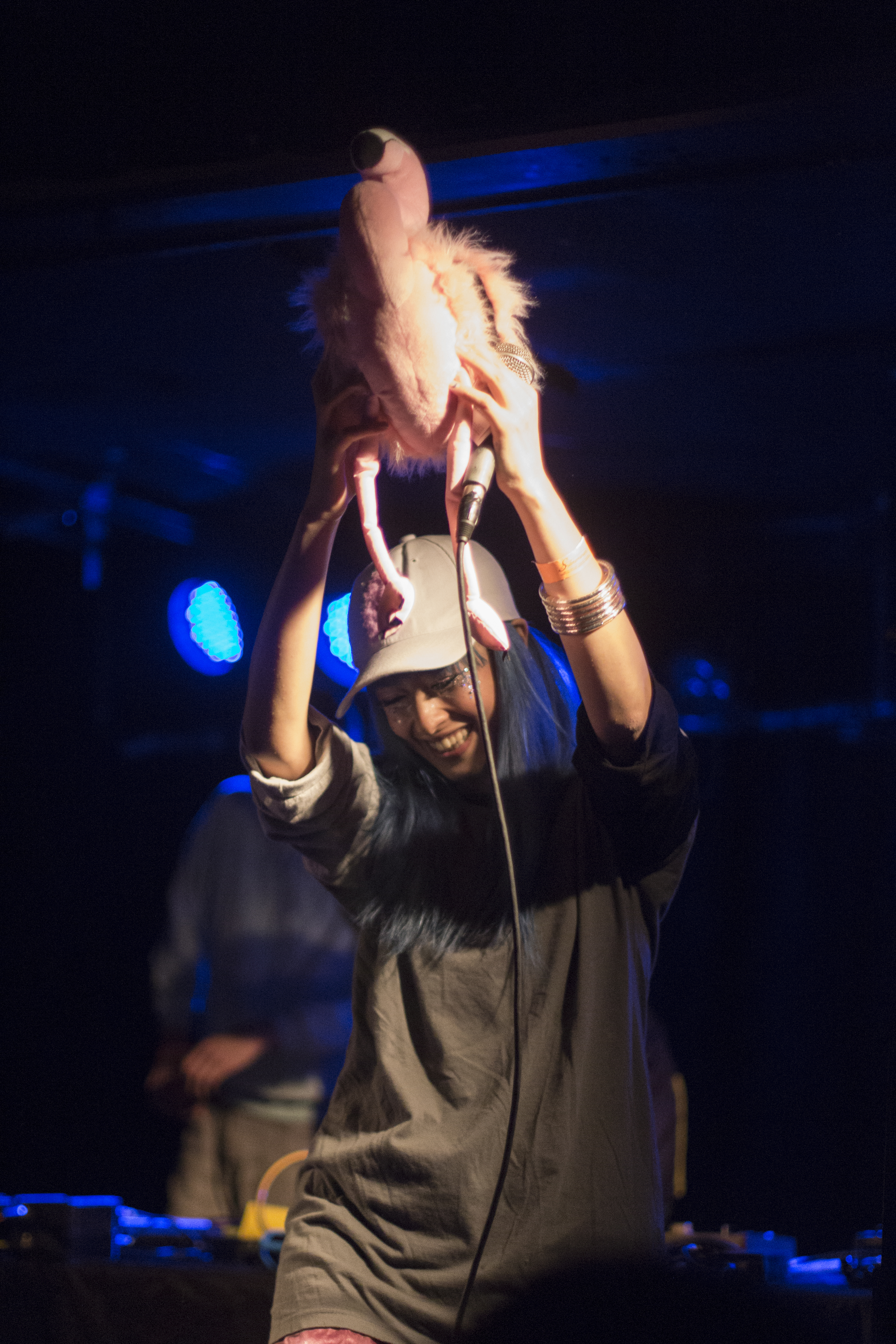 It's for this reason that KKB is often patronized in a way—in most reviews, the band is reduced to cuteness, kitsch, or camp. Now, that's not to suggest that the group isn't cute (they are incredibly cute). But anyone mistaking them for a novelty would be corrected after five minutes at Wednesday night's concert.

The evening started with the band's eponymous anthem, a four-on-the-floor barnstormer with a call-and-response chant ("Kero, Kero!"). Doting fans in freshly-purchased apparel sang along and danced and cheered; when Perry told her audience to "get down" or "bounce," it wasn't taken as a command but as encouragement. The sheer energy in the air practically gave the effect of a Death Grips gig, save for the fact that everyone was smiling.

Kero Kero Bonito is currently touring North American in support of Bonito Generation, its sophomore album. What's more important than the tour is the fact that they've decisively put the possibility of being a one-hit wonder behind them. Here, it's clearer than ever that Bulled, Lobban, and Perry are defined not by naïveté but by sincerity. It's a fine line, to be sure—but it's one (of many) that they walk with aplomb.

In an email interview, Bulled, Lobban, and Perry told me that they "definitely wanted to show the world what [they] could do this time around." It shows.

Where Intro Bonito, the band's first album, was bare bones and lo-fi (albeit charmingly so), Generation is both vibrant and immediate. In the parlance of the Beach Boys, these songs are pocket symphonies: fully-realized little worlds. G-funk synthesizers bump shoulders with MIDI gamelans—it's a much more compelling case for globalization than those "COEXIST" bumper stickers.

If the soundscapes are cosmopolitan, then the themes are universal. "We were inspired by everyday life. You don't have to look so hard that way," the band noted.

And so, over the course of the album's twelve tracks, there are songs about everything from selfies to parents to paintbrushes—as the cliché goes, the only constant is change. Halfway through "Fish Bowl"’s runtime, there's a lovely shoegaze breakdown. "Waking Up" is peppered by a bouncy, punchy sample. And "Trampoline" takes a trick from the dad-rock playbook with a truck driver's chord change on the last chorus.

Kero Kero Bonito in top form is Kero Kero Bonito without form: all rules are out the window on Generation, and the results are as beautiful as they are varied. But if there's any continuity in the Kero Kero universe, it's in the lyricism: there are some hard-to-miss motifs running through the band's output.

Perry's songwriting is both much funnier and much sharper than normally given credit for. On Intro Bonito there was "Sick Beat," a bright rebuke of gender norms and "girly hobbies," and "Babies (Are so Strange)," which featured a tongue-in-cheek refrain about the expectation to be a "child-producing machine." 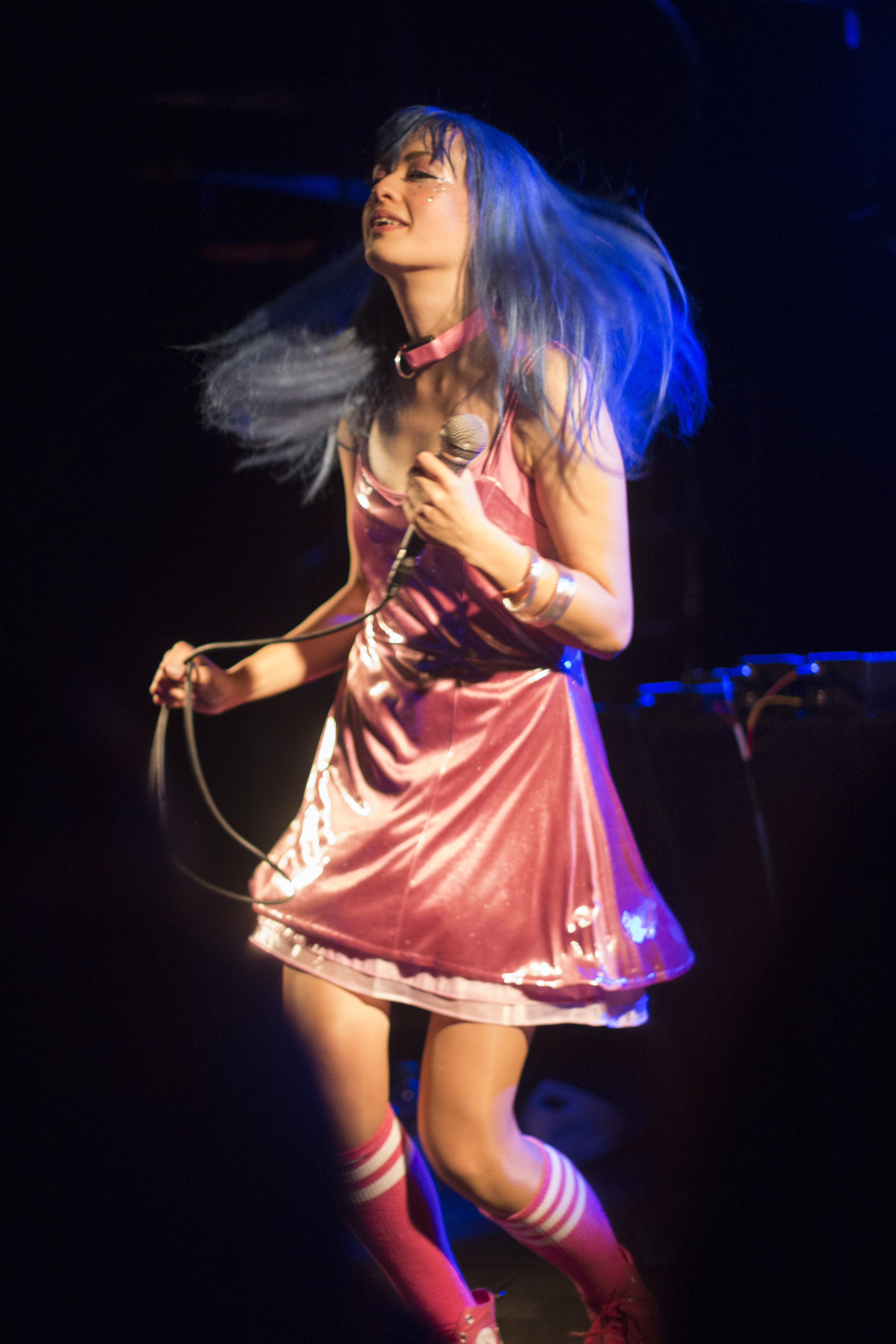 This wry sense of humor hasn't gone anywhere on Generation. For every cheeky self-reference ("what's that in the sky? / Could it be? It's KKB!"), there's some surprisingly astute commentary. On standout track "Graduation," Perry asks: "What you wanna be? There's so much you can do with a degree / Now I can apply for a PhD / Get a nice job with a high salary."

When I compared "Graduation" to a punk song, the band responded by saying they were " good with that interpretation! There could be more punk to come."

Let's hope so. If Kero Kero Bonito doesn't do it, who will?

At a time when electronic music is closer than ever to the mainstream, the group is bizarrely defiant and defiantly bizarre (can you think of a single active band as fearless with the cowbell and the Casio Chord?) They eschew the po-faced in favor of the flamingo-pink. While that's not revolutionary in itself, I think it's a substitution we'd all do well to make every now and then.