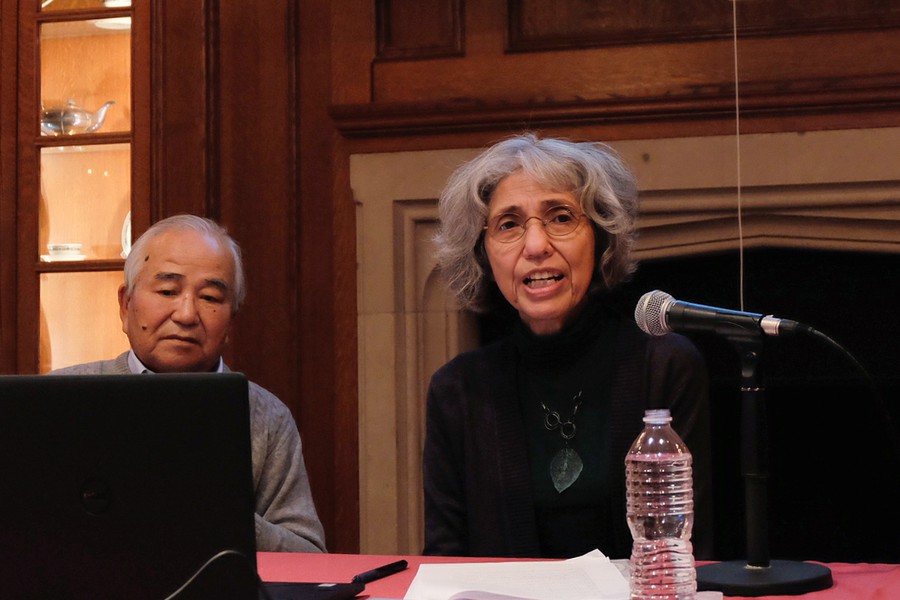 Takashi Teramoto, a survivor of the atomic bombing of Hiroshima and a guide at the Hiroshima Peace Memorial Museum, spoke in the Coulter Lounge at I-House on Wednesday.

Born in 1934 half a mile northwest of the center of the bombing, Teramoto was in the fifth grade when the attack happened. At the time, Hiroshima was considered a possible target, so he had preemptively left his home city.

In mid-April of 1945, he had taken part in a district-wide evacuation to a mountain temple 35 miles away with the other neighborhood schoolchildren.

“My most vivid memory is the difficulty about food,” he said. “You finish eating, and you’re still hungry, and you ask for more, and you’re simply told there is no more.”

Then, during what Teramoto suspects was a parent visiting day on August 4, his mother came to take him to a doctor in the city for his frail condition. Homesick, he begged his mother to take him back to Hiroshima.

“That is a memory that keeps coming back to me,” he said, and that is why we were back in Hiroshima at the time of the bomb. Of course, I cannot help thinking that, if I hadn’t begged my mother to return that day, then she might still have lived on.”

His mother was in their house when the bomb struck on August 6.

“On that morning of the 6th, there was an air raid warning at 7:01 a.m., which was rescinded at 7:09,” he said. “I remember going outside to play with a couple of neighborhood friends. I think it was a little bit after 8 that my mother came outside and told me to come in, because we needed to get ready to go see the doctor.”

“So my mother went in the house   she was in the entranceway getting ready   and I went about four meters away to a desk in the back, leaning against it, and addressing a postcard to the temple I had left behind on Saturday. And I remember writing that address in pencil.”

“So there I was, bent over the desk, and I saw an extraordinary flash of light out of the corner of my eyes behind me. Didn’t know what it was. Everything went black. I knew that all kinds of things were falling on me   I could tell they were falling on me and hitting me   but all I can remember is that I crouched, and made myself smaller and smaller, as small as I could, and kept hoping that this would be over soon.”

Teramoto said he remembers the smell more than any physical feeling.

“There was a very strange smell pervading in the air. And when these objects that were falling from above hit me, I remember the sensation of being hit, but I have no recollection of experiencing pain.”

“And then for a while, there was an indistinct light in the distance ahead of me. I stood up and walked towards that light, and left the house, and by then it was bright outside. Every structure was destroyed. There were mounds of rubble. And so I started walking over these mounds of rubble.”

On his walk, Teramoto saw a woman he knew from his neighborhood, “Auntie,” who took him on her back westward to safety. Within two weeks of finding safety, he learned that his mother had died.  Auntie died two months later from acute radiation.

Teramoto was injured by shards of glass and sickened by the radiation, but considers himself quite lucky compared to those who suffered burns and had rag-like skin hanging from their appendages.

He has dedicated his life to teaching “future leaders,” like those at the University of Chicago, the importance of safeguarding peace. He finished his presentation with a quotation from Pope John Paul II:

“The hope of Hiroshima is to abolish nuclear weapons and establish peace.”

Documentary about activists shown after talk.