Students to Receive Diplomas With Housemates at Eight Separate Ceremonies 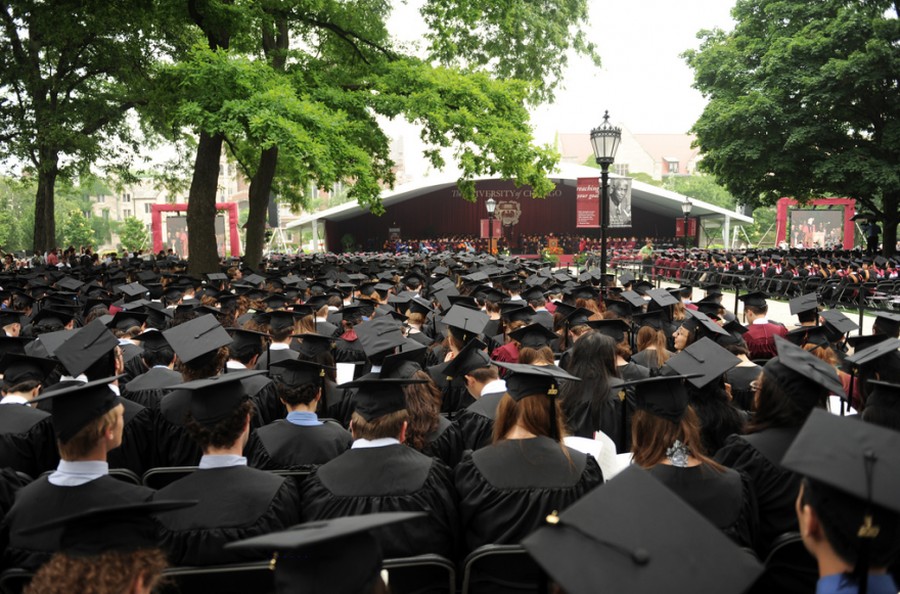 In past years, Zimmer has handed out diplomas at a ceremony on the quad.

Courtesy of UChicago Division of the Humanities

The University announced major changes to its Closing Convocation programming in an e-mail to students Thursday morning.

In past years, President Robert Zimmer has handed out diplomas to all students at a ceremony on the quad. This year, there will be eight diploma ceremonies at different locations on campus. As before, Zimmer will “verbally confer the degrees” at a University-wide ceremony in the morning.

“The ceremonies will be organized by Residence Hall and presided over by the Resident Masters at locations across campus,” Dean John "Jay" Ellison said in the announcement e-mail Thursday.

“We recognize that students have important connections to their College Housing communities and by organizing the College diploma ceremonies by Residence Hall, the ceremonies will be more intimate,” read the College’s FAQ page about the changes. Students will be able to request to graduate with a different residence hall.

Student Government President Eric Holmberg and College Council Chair Peggy Xu are collecting student feedback to give to the deans.

In a Facebook post, Holmberg and Xu say they "confirmed that no students were included in any part of the extensive planning process leading up to this decision."

In an e-mail, University spokesperson Jeremy Manier said that students, parents, and other participants in past ceremonies have told the University that it took too long to hand out diplomas.

Asked why the University settled on the house system to break up the diploma ceremony rather than majors or departments, Manier said "Holding ceremonies based on units or majors would have produced uneven results, with some relatively small groups and others that would be quite large."

At the time of this article’s publication, a petition calling on Dean John Boyer, Ellison, and Zimmer to reverse its decision had collected more than 600 signatures.

“Most students do not remain in their House beyond second-year, and most students' social circles encompass individuals from their House, RSOs, teams, classes, and Greek Life. Limiting the individuals with whom students can share this day is unnecessary,” it reads. “The College should reverse its decision and continue awarding diplomas to the Class as a whole.”

Manier confirmed that Resident Masters (RMs) will hand out diplomas. The University has not yet announced the locations of the eight ceremonies.

The University also announced the inaugural “Class Day” which will feature an invited guest speaker on the main quad. This will be in addition to the address at the morning convocation ceremony, which for more than 45 years has featured a faculty member rather than public figures to address graduating students.

“While the Baccalaureate Ceremony has outgrown Rockefeller Chapel, traditional elements of the event will be integrated throughout the Class Day celebration,” Ellison’s email read.

The University announced last year that the fall 2016 Convocation will be the last non-spring quarter ceremony. Students who graduate at the end of subsequent fall, winter, or summer quarters will be invited to the next spring Convocation.

At the end of Class Day, there will be a reception for students and families at the Museum of Science and Industry.

Clarification: This article has been updated to make clear that Zimmer verbally conferred degrees in past years and that the Class Day speech is not replacing the faculty speech at Convocation.

This article misstated that the petition collected "likes." It collected signatures.

Back to the Drawing Board for Convocation Changes

As we go on/ We remember/ All the times/ We had together?