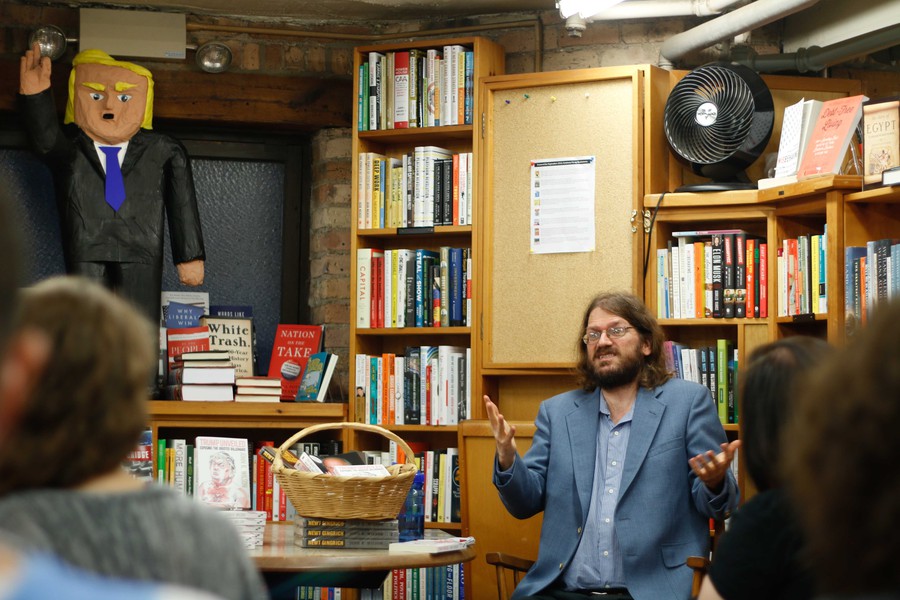 A small audience gathered in the back of 57th Street Books on Monday to discuss Trump Unveiled, a book that analyzes Republican presidential candidate Donald Trump, his beliefs, and the reasons behind his quick rise to popularity during the campaign season.

Trump Unveiled author John Wilson, co-editor of AcademeBlog.org and the author of six other books that focus on demystifying and inspecting political figures and eras, was joined by historian and journalist Rick Perlstein, the author of The New York Times bestseller Nixonland: The Rise of a President and the Fracturing of America and Before the Storm: Barry Goldwater and the Unmaking of the American Consensus.

Wilson began the hour-long talk by comparing Trump’s personal views to those of his party.

“Of course, Trump is not ideologically conservative,” Wilson said. “He follows the ideology of Trump. Back in 1999, he was pro-choice, he wanted a 14 percent wealth tax, the biggest tax on the rich in history—and now he’s turned around and he’s become a conservative.”

According to Wilson, in many ways, Trump serves as a “litmus test” for the Republican Party, showing how far its platform has shifted over the past few decades.

“Trump is a mixture of self-promotion and opportunism from an ideological perspective, but he also reveals a lot about where the Republican Party is,” Wilson said. “Trump is the ultimate; Trump blows in the wind. So the fact that he’s taking these positions shows where the party has gone and how Newt Gingrich and Rush Limbaugh have pushed it in these directions.”

According to Wilson, the disparity between Trump’s beliefs and conservative policies is often a source of humiliation for the party.

“So [MSNBC talk show host Chris Matthews] asks [Trump], ‘What about abortion, do you punish the woman?’ and Trump goes, ‘of course,’” Wilson said. “[Trump is] telling him what he thinks conservatives believe. He doesn’t understand that the anti-abortion movement has said, ‘To make our position popular, you have to go after the doctors and you have to make abortion illegal, but you can’t go after the women and throw them in jail because it’s just too unpopular.’ He’s so focused on being Donald Trump that he doesn’t study any of these issues or communicate with the people who understand what he’s supposed to think.”

Delving into Donald Trump’s complex character and popularity despite his ideological discrepancies captivated Wilson while writing Trump Unveiled. He says it will continue to fascinate him for the remainder of the election.

“He’s like a great comic book villain to me that embodies so many terrible things that I wanted to get into his head and understand him,” Wilson said. “For me, he’s also interesting as a continuation as a type of radical extremism in the Republican Party and the conservative movement, the fulfillment of all the things I’ve watched in conservatism during the past quarter century.”