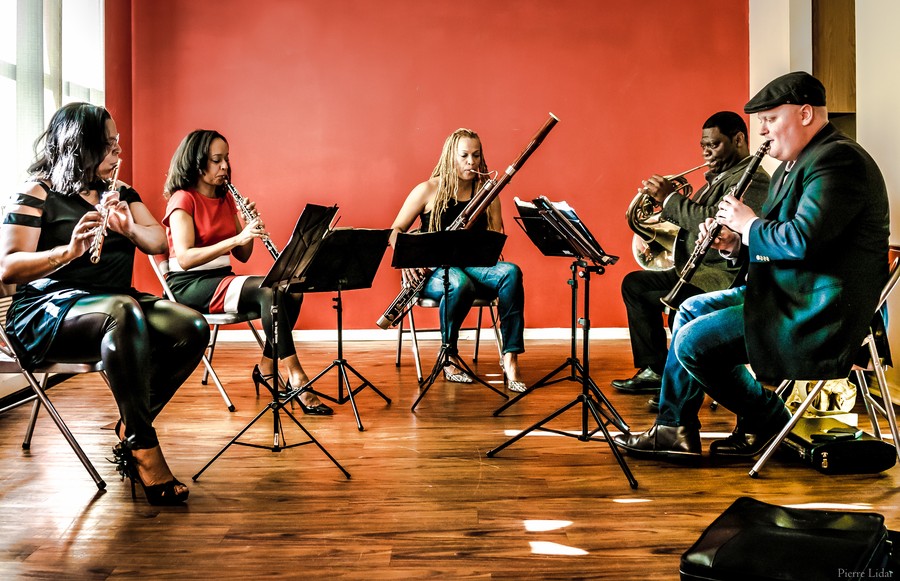 Imani Winds, the oldest active woodwind quintet in the world, is the new Don Michael Randel ensemble-in-residence at the University of Chicago.

When it comes to classical music on campus, the winds of change are a-blowing—literally.

After 17 years of having a string quartet in-residence, the University appointed New York–based woodwind quintet Imani Winds to succeed the Pacifica Quartet as the University’s second Don Michael Randel Ensemble-in-Residence, effective this season.

The position, which was inaugurated in 2013, includes performances under the auspices of the on-campus concert series University of Chicago Presents and participation in the University’s new music collective, Contempo. Additionally, the new ensemble-in-residence will directly teach University students through master classes and sectionals.

The seeds for Imani Winds were planted in 1997, when flutist Valerie Coleman sought to form a chamber ensemble entirely comprised of musicians of color. In doing so, she hoped to challenge long-entrenched notions of what classical musicians and audiences look like, as well as provide role models for young musicians of color.

“It was sort of an experiment to see if a group of musicians’ shared background would affect the way they approached music-making,” founding member Monica Ellis recalled.

The same year, then–University of Michigan undergraduate Aaron Dworkin founded the Detroit-based Sphinx Organization to support pre-professional classical musicians of color. Yet the lack of networks and visibility at the time made recruitment a challenge: Coleman knew only a few musicians, and mostly reached out to potential group members through cold calls.

Eventually, Coleman brought on four other musicians to form a traditional woodwind quintet with Ellis on bassoon, Toyin Spellman-Diaz on oboe, Jeff Scott on horn, and Mariam Adam on clarinet. They called themselves Imani Winds, after the Swahili word for “faith.”

As the group approaches its twentieth season, it has had only one change of personnel, when clarinetist Mark Dover succeeded Adam earlier this year. Imani Winds stands today as the oldest active woodwind quintet in the world and one of the few whose members prioritize chamber music. (Other prominent quintets like the Berlin, Philadelphia, and New York Woodwind Quintets reap talent from symphony orchestras in the same cities.)

Though the ensemble’s configuration may be traditional, its music-making is anything but. An Imani hallmark is its wide-ranging concert programs, where the irrepressible ritmos of Paquito d’Rivera’s jazz-infused Kites Over Havana are as at-home as an arrangement of Stravinsky’s snarling Rite of Spring.

The group has the added perk of having two in-house composers among its ranks: Both Coleman and Scott have written works for wind quintet and beyond. Last year, Scott brought the quintet together with the celebrated Harlem Quartet and a jazz trio for his seven-movement Passion. Set to words by writer A. B. Spellman (Spellman-Diaz’s father), the composition imagines a meeting between Bach and John Coltrane—a quintessentially Imani undertaking.

“I don’t really think of what we do as playing music outside the canon as much as I consider it expanding the canon,” Scott observed.

Their two concerts scheduled as part of University of Chicago Presents are similarly all-embracing: Considered Modern, on January 20, will feature the music of contemporary composers like Elliott Carter, Ruth Crawford Seeger, and Paquito d’Rivera, followed by a world-premiere-filled concert on May 3 to coincide with the citywide Gwendolyn Brooks centenary celebration.

Unlike the Department of Music’s residency program—which has hosted Spektral Quartet since 2012—the Don Michael Randel residency is intended to be something of a revolving door, switching out ensembles every two years.

The pinched time frame, however, doesn’t daunt the Imanis.

“We know how fast two years can fly, but we’re hoping our time here will be impactful, not just at the University, but in the community at large,” Ellis said. “We just want to share our music with as many people as possible.”

Editor’s Note: Hannah Edgar is the Marketing and Communications Assistant of University of Chicago Presents, the concert series which produces the Imani Winds’ concerts.