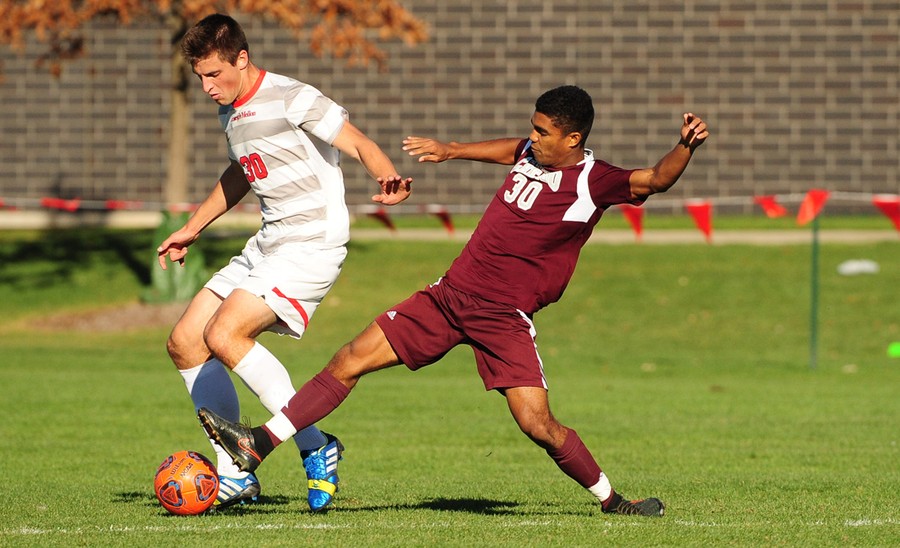 Fourth-year forward Chris Mathis attempts to steal the ball off of an opponent.

This Saturday sees a clash of titans as the No. 2 UChicago Maroons square off against the No. 4 Rochester Yellowjackets. Neither team has lost yet this season, and a victory over its conference rival could ensure Chicago a No. 1 ranking for next week.

The Maroons enter the game boasting an 11–0–0 record this year, tying them with Trinity University for the best record in Division III. Rochester, meanwhile, has suffered two draws on the season, giving it a 7–0–2 record and a lower ranking than Chicago. When the two teams met last season, the result was a fierce 1­–1 draw in two overtimes.

The cornerstone of this Chicago team has been its defense, as the group has only allowed three goals all season. Rochester, sure to come out with guns blazing in the first half, will certainly put the backfield to the test. However, the defenders are working better than ever as a unit, utilizing their chemistry and communication to shut down every opponent they’ve come across this year.

“The team is communicating better than ever, which is a key to defending effectively,” said third-year goalkeeper Hill Bonin. “The defenders and I are constantly problem solving on the fly—analyzing what the other team is doing and finding ways to neutralize their attack. So far that has been effective. Good mentality is another huge factor; we are all supportive of one another and have a collective sentiment that we will do anything possible to stop a team from scoring.”

Bonin has been a major factor in Chicago’s goal prevention as well. The third-year has started all 11 games for the Maroons this season and posted nine clean sheets. He is also sporting a .27 goals against average, which would shatter the school record if the season ended today. However, with the No. 1 ranking potentially on the line in this weekend’s match, the pressure is certainly mounting.

“It's definitely a big game,” said Bonin. “It will be a serious matchup between two nationally competitive teams. We have not played to our full potential the past couple of games. The real opportunity for us this weekend is to get our form back on track. I think that the excitement of this weekend’s game will help motivate us to play our best soccer again.”

With goals certain to be at a premium Saturday, the Maroons will likely look to second-year forward Max Lopez to put the ball in the back of the net. The second-year striker has already buried 10 goals on the season while also tallying five assists. Chicago will certainly be feeding him the ball all game long to try to find any kind of breakthrough. With Bonin in the net behind them, one might be all the Maroons need.

The game is scheduled to take place Saturday at Stagg Field. Kickoff is set for 1:30 p.m.