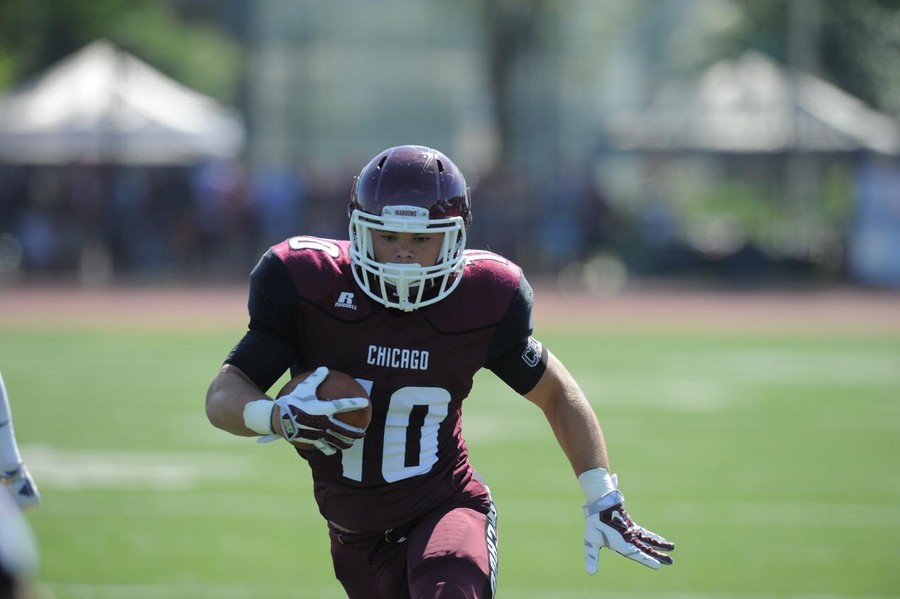 Third-year running back Chandler Carroll carries the ball for the Maroons.

The Maroons will travel down to Mount Berry, Georgia this weekend to take on the Berry College Vikings. Coming off a thrilling come-from-behind victory against Birmingham Southern College 38–34, Chicago looks to continue its winning ways on the road. Berry returns home after its first loss of the year against Wash U. The road has not been too kind to the Maroons so far this season with both of their losses happening away from Chicago.

Fourth-year captain Jackson Garrey hopes things change for the team on the defensive side of the ball this weekend. “Defensively, we didn’t play our best game last week, but we made stops when it mattered. Berry has a very solid team as well as two tremendous receivers and losing last year in overtime really stung. I’m excited to play them in their stadium and come out with a win.”

So far this year, the Maroons’ offense has led the team while the defense has struggled, giving up a total of 144 points in just four games. Garrey hopes that the defense comes out fast because it has allowed a touchdown on the opening drive in three of Chicago’s last four games. Pressure and personnel changes are in store for the Maroons this week, who are looking to stop a Berry offense that ranks amongst the best nationally in points per game.

On the other side of the ball, UChicago is rolling. Burke Moser and Chandler Carroll have been lighting up the scoreboard and the stat sheet. The offense has averaged more than 460 yards per game, and over the last two games Moser has passed for 421 and 433 yards respectively.

During that same stretch, third-year running back Carroll has unconventionally led the Maroons in receiving yards and has found the end zone on five separate occasions. He is excited about the opportunity to play such an accomplished team as Berry on the road.

“It should be a competitive game,” Carroll said. “Both teams have a lot of talent on both sides of the ball. However, the game will come down to execution and who can make the big plays when their team needs them. I think if we come out with great energy and focus that we can beat them.”

A big key to the Maroons’ success this year has been offensive line play. The line has only given up three sacks in 199 drop-back passing attempts in the first four games. Second-year offensive guard Tucker Squiers commented on the line’s play, saying, “It’s a group effort, all five lineman have to work together to be successful. Cohesion and communication are primary in keeping Burke upright and Chandler running. It’s something we take pride in.”

The Maroons play Berry College this Saturday at 11 a.m. Next week, UChicago returns to Stagg Field to play hosts to Rhodes College for Homecoming.