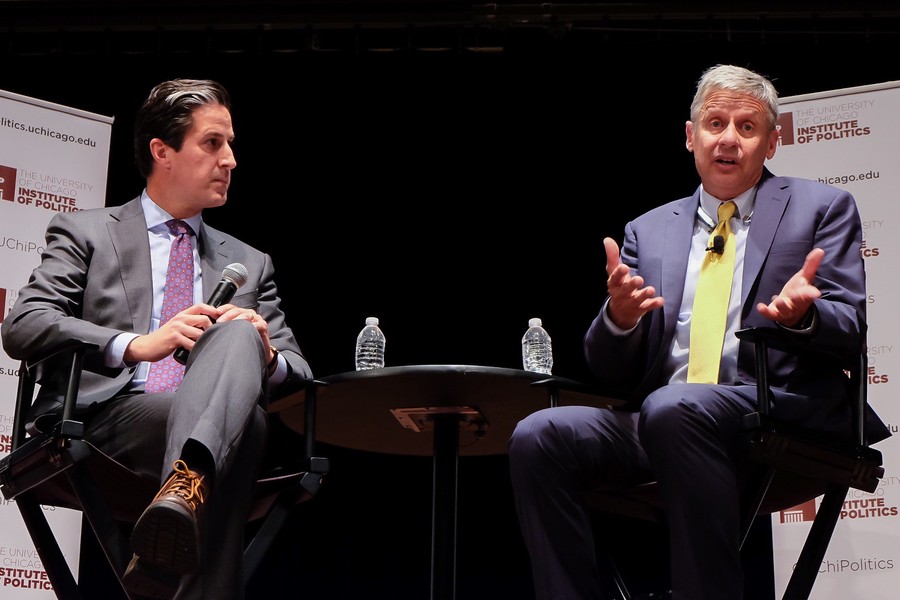 Gary Johnson, the Libertarian Party nominee for president, addressed a crowd of over 200 students on campus Friday.

The former Republican Governor of New Mexico began with a remark on honesty: “If you tell the truth, you don’t have to remember anything…. One of the unforgivable sins in life is hypocrisy—saying one thing and doing another thing. Myself and Bill Weld, [the Libertarian nominee for vice president], we are not hypocrites.”

Dissatisfaction with the major party candidates means Johnson has significantly improved on his showing in the 2012 election in polls so far this cycle, putting him in position to play a decisive role on Election Day. In his address to a packed I-House Assembly Hall, Johnson offered a clear vision of what he stands for: limited government, protection of minority rights, and freedom of choice.

“I also believe that most Americans are [for a] free market,” Johnson told the crowd. “Free market is the bottom line. I think it means more U.S jobs, not less U.S jobs.”

He embraced immigration, and said the U.S. should make it as easy as possible for immigrants to find work: “Building a wall across the border is...just crazy.”

After touching on his support for marriage equality, abortion rights and the legalization of marijuana, Johnson addressed military spending and foreign policy, two of his signature issues. He first affirmed his support of a strong national defense: “The president’s first and foremost responsibility is to keep us and our freedom safe...[That means] having a military capability that is unquestionably second to none.”

However, Johnson voiced his skepticism about military interventions abroad. Before intervening, Johnson said, he “would have to be convinced it is absolutely necessary to protect the American people or clear U.S interests.” Johnson said, “I would be the skeptic in the room.”

Johnson referenced the U.S intervention in Iraq and its unintended and undesirable consequences as reasons to question the effectiveness of policies of regime change. “Saddam was horrible,” Johnson said, “but is what we replaced him with any better?”

“We need a chess player in the White House,” Johnson said of the need to balance priorities and consider consequences before foreign interventions. “More importantly,” he said, “we need a policy guided by principles, not politics.”

Students’ reactions to Johnson’s lecture varied, but overall he was warmly received in the hall. During the question-and-answer session that followed, dozens of students lined up to ask the governor his views on immigration policy and government-provided health care, how he’d handle Russia and China, and his opinions of the other presidential candidates, Donald Trump and Hillary Clinton.

A second-year law student asked Johnson how he would continue protecting LGBTQ+ rights if Trump or Clinton becomes president. Johnson responded that even if he failed to become president he had no intention of receding from public life. “I would provide—and continue to provide—a voice to protect those interests. A vote for Johnson is the first vote for whole lot of people to say these issues matter.”

Another student brought up Johnson’s “What is Aleppo?” response to a question on the crisis in Syria on MSNBC, and his inability in a recent MSNBC town hall to name a foreign leader he admired. The student asked if those responses undermined his credibility as a presidential candidate. Johnson responded that knowledge of foreign leaders is not a qualification for putting American soldiers in danger. He said that being able to “dot the I’s and cross the T’s on names of foreign leaders or geographic locations” does not qualify a candidate to be president.

After the session, Johnson moved to the lounge to answer questions from the press and spoke on topics like drug policy and campaign finance reform. “I am putting myself out here to answer any questions you may have,” Johnson said. “Other candidates may not do that.”

Democratic Presidential candidate and UChicago alumnus held a rally at Rockefeller Chapel on the first day of classes.