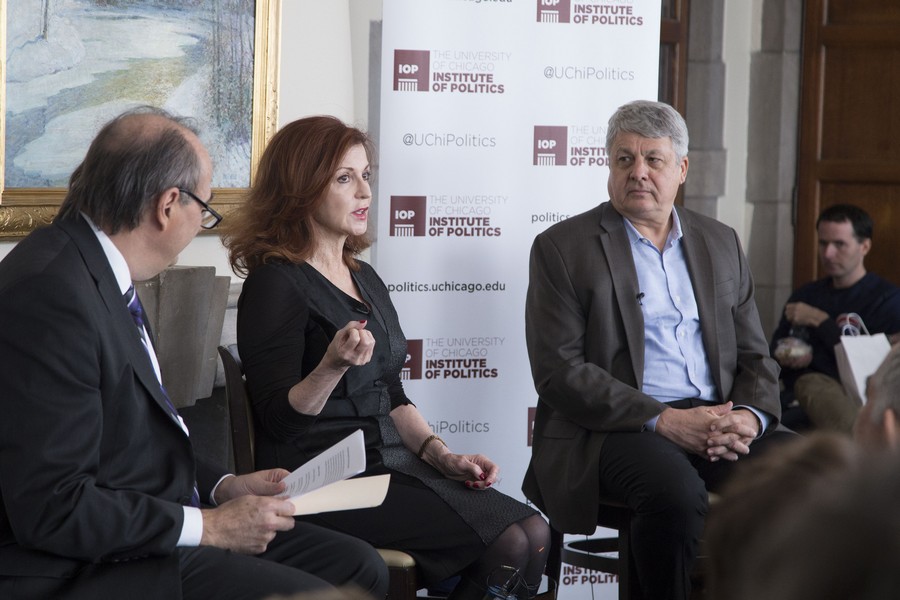 David Axelrod sat down on Friday with Maureen Dowd, Pulitzer Prize–winning columnist for The New York Times, and Carl Hulse, chief Washington correspondent for the Times, for the latest in a series of conversations about the presidential campaign.

“Watching Trump was like watching a bank robber go into a bank and find for some crazy reason all the doors open and no guards there…he’s stunned, more than any of us are flabbergasted, that he is where he is.”

Hulse agreed that Trump has been surprised by his own success. Axelrod asked the panel to address Trump’s unpredictable, often self-destructive behavior.

“He self-destructs, because he’s a clinical narcissist and he can’t stop himself, and celebrity is like his heroin and he’s in an overdose now, and every rejection, every humiliation, is a small death,” Dowd said.

Axelrod pointed out that the Republican base is willing to support Trump “when he behaves himself.”

The problem for the GOP, according to Dowd, is Trump’s caprice. “It’s like being handcuffed to a hurricane. Nobody knows, minute to minute, when he’s going to do something like that all-night tweet thing about Miss Universe.”

Despite what she called a “racist and sexist” base, Dowd credits Trump’s rise to legitimate anger and frustration. “American citizens have the right to be really angry because we went into a misbegotten war without anyone knowing the difference between Sunni and Shi’a. The economy almost collapsed and no one even knew what a derivative was.”

“There are rage rooms opening across the country where you can go in and destroy a TV set with a baseball bat. To some of these people, Trump is the baseball bat,” Dowd said.

The panel characterized Clinton as unnecessarily defensive and prone to add fuel to the fire of scandal by being unforthcoming in investigations. Dowd attributed her guardedness to longtime aides she called “creepy attack dogs.”

“She calls up this wall of secrecy and paranoia that tends to send her foes and the press into this frenzy where they think she’s hiding something,” Dowd said. “Her success in the White House will depend on whether she’s able to dismantle the paranoid side and get rid of Sidney Blumenthal and David Brock, these attack dogs who feed that side. But I’ve never seen people get less paranoid in the White House.”

Previous IOP panelists in the Decoding 2016 series have conjectured that Trump might be positioning himself to build a far-right news network if he loses the election. Dowd disagreed. “His brand is ruined,” she said. “I think he’s going to hit the earth like a giant orange fiery comet, and we’re not going to hear from him again.”

"These people,” Heilemann said, gesturing around the lecture hall, “are entitled and happy.”