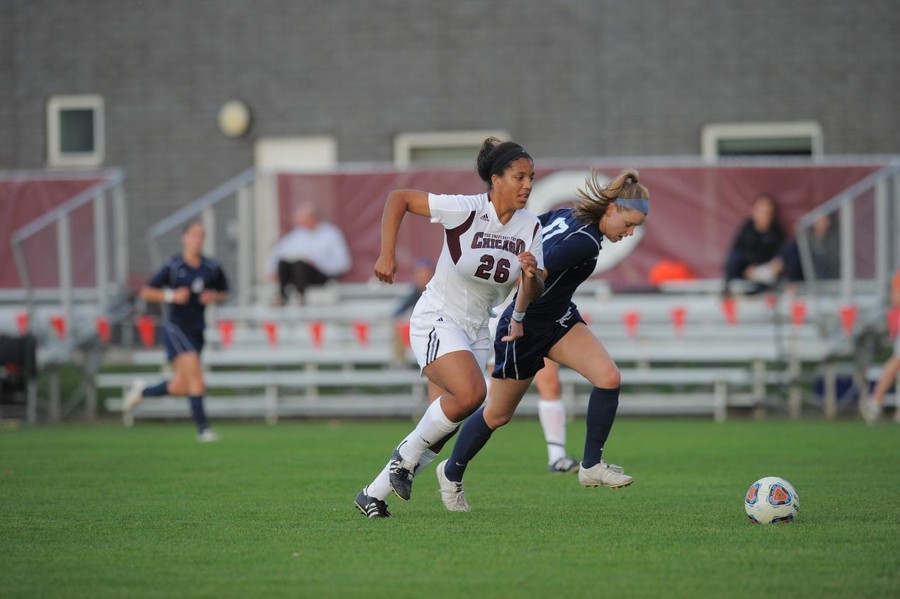 Third-year Madori Spiker races after the ball against a defender.

The No. 11 Maroons are set to host one of 16 NCAA regionals this weekend after earning an at-large bid to the NCAA DIII Championship. This marks the fourth consecutive year Chicago has made the postseason, as well as the 15th in the team’s history.

The weekend will feature a four-team regional pod with games on both Saturday and Sunday. Webster University, Augsburg College, and Milwaukee School of Engineering (MSOE) will make a trip to Chicago all looking to come away with a coveted regional title.

The first game of the regional will feature the Maroons against the Webster Gorloks (13–7; 9–0 St. Louis Intercollegiate Athletic Conference) on Saturday. The Maroons and the Gorloks have faced off twice in history, both in the NCAA playoffs. The Maroons were triumphant in both meetings, once in 2004 and more recently in 2014. The Gorloks come into this game boasting some impressive offensive accolades—they are ranked in the top 10 nationally in goals and points on the season, as well as in points and assists per game. The Maroons look to shut down their offense and take a lead early.

If the Maroons win on Saturday, they will advance to Sunday’s regional final and would be pitted against the winner of the Augsburg Auggies (17–4; 8–3 Minnesota Intercollegiate Athletic Conference) and the MSOE Raiders (17–3–1; 10–0 Northern Athletics Collegiate Conference).

The Maroons hope to see an exact repeat of their 2014 regionals, in which they beat Webster in game one and defeated Augsburg for the regional championship. Whether they play Augsburg or MSOE in game two isn’t as much of a concern to them as coming away with the championship again.

The South Siders have two statistics in their favor going into this weekend. They are undefeated against non–UAA opponents as well as undefeated on their home field this season. While the playoffs can be a vastly different beast than the regular season, the Maroons are prepared to play two games this weekend and look to come away with two Ws.

Third-year Kelsey Moore notes how proud she is of the team’s success this year and is looking to a long postseason. “The postseason is a blank slate for us,” she said. “So far this season has been incredible, and the work we've put in has gotten us to the point we are at now. But, every game from now on will be a battle. We have a pretty brilliant group that I am so proud of. I am very excited to see what we can accomplish in the next couple of weeks, starting this weekend at home!”

The team has a wealth of experience in regionals, having now made the NCAAs four years in a row. The Maroons look to use their experience and expand on their previous trips to the NCAA, making this season their longest yet.

The weekend’s schedule will be as follows: UChicago vs. Webster on Saturday at 11 a.m., Augsburg vs. MSOE on Saturday at 1:30 p.m., and the regional final will be on Sunday at 1 p.m. All games will take place on the grass field.