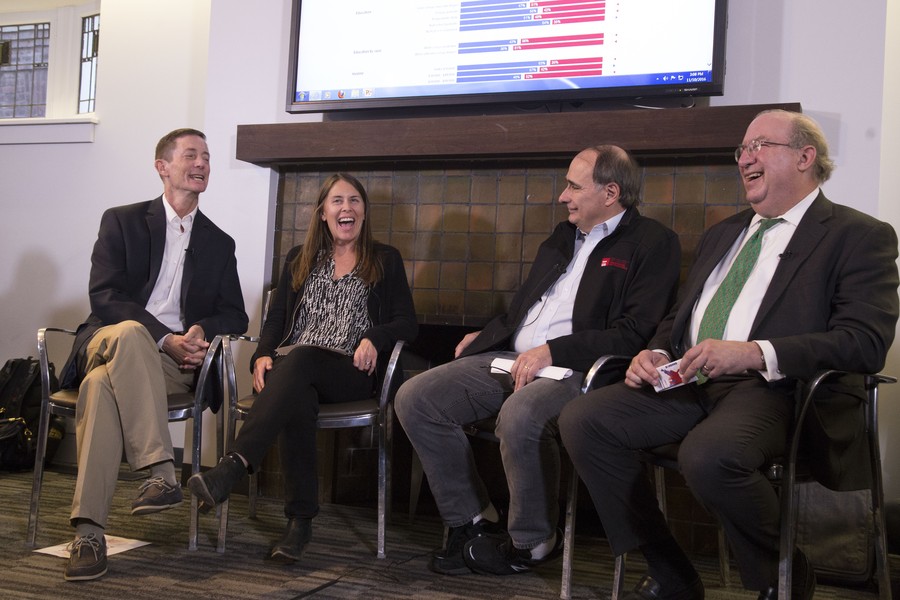 David Axelrod, the man behind the scenes of Barack Obama’s 2008 campaign, sat down Thursday at the Institute of Politics (IOP) to discuss the election of a man who seems to repudiate, in style and substance, much that the President represents.

Axelrod and current IOP fellows Liesl Hickey, Bruce Reed, and Philip Revzin were joined via Skype by former IOP fellow Stuart Stevens to discuss Donald Trump’s being elected president. Axelrod and Reed, both Democrats, were balanced on the panel by Hickey and Stevens, both Republicans. Regardless of political affiliation, all were shocked by Trump’s victory.

Axelrod began by giving his thoughts on Hillary Clinton: “I don’t think that Hillary Clinton, as a candidate, was a strong candidate in [the industrial Midwest]. Maybe some of it was that she was a woman, although Barack Obama was, and is, black. Some of it was cultural: She just did not speak to those voters in a persuasive way.”

Reed, who worked on Bill Clinton’s campaign, highlighted Macomb County in Michigan as a major loss site for Hillary Clinton, arguing that she did not speak to their values. In 2012, he noted, Obama carried that county by a wide margin. Hickey echoed his sentiment, with her focus on Bucks County in Pennsylvania.

“She really could have run up the score. That’s a very quintessential swing suburban county that has gone for pretty much every single presidential candidate both sides of the aisle. She really didn’t perform well there,” Hickey said.

Reed also stressed that a major error by the Clinton campaign was not talking to the voters about what really mattered to them. “Our side tried to make it all about Trump. The First Lady had excellent advice: when they go low, we go high. We didn’t follow that advice. Every minute spent talking about him was a minute lost talking about the voters,” Reed said. To him, this was a trap the Clinton campaign fell in, and it buried the message.

Revzin, the resident foreign policy expert, discussed how scared Washington and the world are. In his view, the uncertainty about who will be heading the Department of State is higher than almost ever before. All around the world, he fears, right-wing parties will seize on Trump's victory to gain power.

“Washington was just like it was after 9/11. They were in such shock, nobody was working, they were just calling each other, asking ‘What do you know?’ I think they’re petrified,” Revzin said.

The panel agreed that ending the Affordable Care Act will be the new unified government’s first priority. After that will come stopping Environmental Protection Agency funding and the Trans-Pacific Partnership agreement, followed by the infamous wall and immigration as a whole. All assembled saw dark days ahead.

But the gathering was not without hope. In response to a question about unifying the country after this result, Axelrod urged everyone instead to lean on the political process that we have, even when our elections fail. “If you are fearful of policies and rhetoric that you’ve heard, the antidote for that is to go out and elect people who will stop those policies. In the interim, it’s incumbent on all of us to fight for our principles.”