Protesters Walk Out of Classes, Rally Against Trump 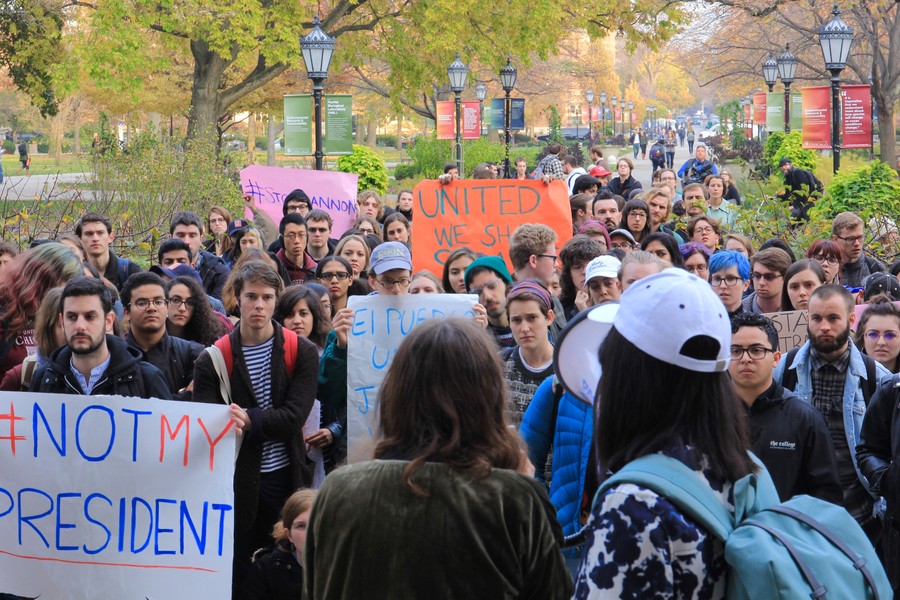 Hundreds demonstrate against Donald Trump outside an admin building.

More than 200 students, faculty, and members of the campus community gathered outside Levi Hall Tuesday for a rally against Donald Trump and the Dakota Access Pipeline (DAPL).

The demonstrators met to show solidarity with groups that face increased prejudice in the wake of Donald Trump’s election to the presidency. The rally was also part of a national day of action to support the North Dakota Standing Rock Sioux tribe in their effort to halt the construction of the Dakota Access Pipeline (DAPL) across their primary water source. The event’s Facebook page asked students to walk out of classes during the rally to show their support.

Speakers addressed the crowd, many of whom held signs with messages including “Legalize Melanin,” “No Carrot is Gonna Deport Me,” and “Stay Outraged,” from the steps in front of Levi Hall. The speeches were broken up by rounds of chants including “No Trump, no KKK, no fascist USA,” and “Say it loud, say it clear, refugees are welcome here.”

Third-year Christina Uzzo read a statement released Monday by the Standing Rock Sioux Tribe following the Army Corps of Engineers’ decision to delay an easement necessary to the DAPL’s construction pending environmental review. After Uzzo’s speech and another round of chants, Luis Gomez, an undocumented student at the Illinois Institute of Technology, spoke about the fears he had about his family and friends being deported under Trump’s administration.

José Heredia, a third-year and member of MEChA, warned the crowd that they should expect increased violence against minorities, finishing with MEChA’s slogan of “La union hace la fuerza,” which translates to “Unity creates strength.”

OBS organizer JT Johnson stressed a perceived connection between the Standing Rock Sioux’s opposition to the DAPL, solidarity with victims of racially motivated assaults and harassment at colleges including the University of Pennsylvania, and challenges to legal discrimination against transgender people as smaller bouts in a long-running fight against prejudice.

Anna Wood, a UCSA representative, told the crowd that opposing Trump should not be the end of their activism. “If we only resist Trump, without also fighting for a bold, radical vision of what our country and our world could look like, the best thing that we could possibly end up with is the same thing we had before, which is already bad enough for a lot of people.”

Following the rally, Johnson spoke about the importance of unity. “Native Americans, black Americans, Latinx people, all of our struggles are tied, and none of us can be free unless we’re all free.”

Third-year and UCSA leader Alex Ding encouraged students feeling disheartened after the election to become involved in activist efforts moving forward from the rally. “More than ever, I think we need to put up a united front as students to stand opposed to the policies that Trump would employ, but also to the policies that this university employs as well…. Plug in, get involved, stand up, and fight back.”

Admins will meet with an RSO that supports undocumented students to discuss student concerns.