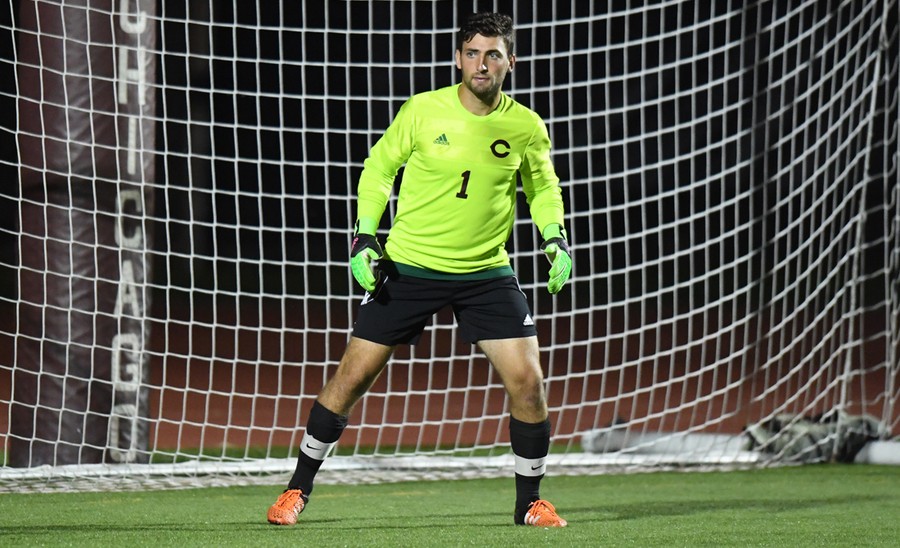 Third-year goaltender Hill Bonin gets ready to face a shot.

The No. 1 men’s soccer team continues postseason play this weekend, hosting a four-team sectional of the Sweet 16. Coming off of a first-round bye and a dominant 4–0 victory over Westminster College in the second round, the Maroons (17–0-2, 5–0–2 UAA) will take on the No. 25 University of Redlands Bulldogs (17–5–1) on Saturday. The winner will face either the Benedictine University Eagles (Ill.) (16–4–2) or the No. 8 University of St. Thomas Tommies (18–1–3) on Sunday in the quarterfinals.

Last weekend, Redlands knocked off No. 23 Wash U (10–4–3) in penalty kicks in the first round of the tournament and came back from a 1–0 deficit to top host DePauw University (12–6–2) 2–1 in the second round. On Sunday, host Chicago cruised past Westminster, scoring less than two minutes into the game and netting three more shots in the first half. The win gave UChicago and third-year goalkeeper Hill Bonin their 15th shutout of the season.

Chicago and Redlands will play each other for the first time in program history on Saturday. Last year, both the Maroons and the Bulldogs went home in in the second round of the NCAA tournament, with the Maroons falling to Kenyon in a penalty kick shootout and Redlands dropping to Trinity 1–0. Chicago returns to the Sweet 16 for the second time and first since 1996, while Redlands last saw action in the third round in 2011.

Third-year defender Stacey Reimann said of the team’s recent All-UAA honors, “Even with the impressive recognition our team and coaches received this week through the UAA awards, we definitely still have more to accomplish this season and do not plan to have it end this weekend.”

Of the team’s preparation, Reimann said, “The best way we have found to prepare is to continue practicing and playing at our level, knowing that other teams will have hopefully not seen a team with our talent yet in the season.”

Reimann is especially looking forward to having the home field advantage this weekend, as the squad’s only two ties have resulted from away matchups. He said, “We have had really incredible turnouts at most of our games this season, so being able to host the Sweet 16 and Elite Eight matches for everyone who has supported us throughout this season means a lot to the team.”

The UChicago­–Redlands matchup is set to begin at 11 a.m. Later that day, the Eagles will take on the Tommies at 1:30 p.m., with the winner of each game advancing to the quarterfinals on Sunday at 1 p.m.