Journalist Declares Buchanan to be the "Worst. President. Ever." 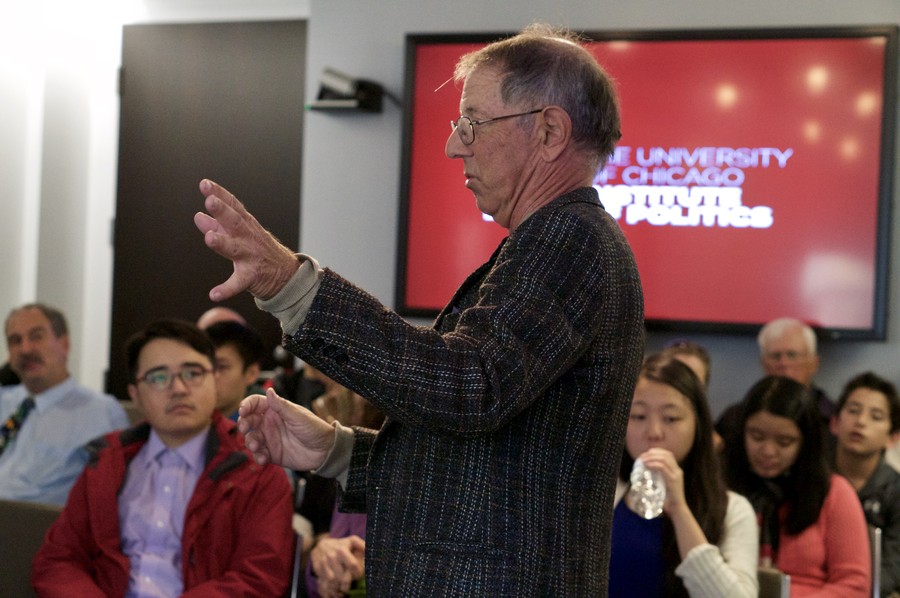 Robert Strauss, speaking to the crowd at the IOP.

James Buchanan’s failure to hold the Union together in the face of spiking regional tensions over the issue of slavery cements his status as the worst president of the United States, journalist Robert Strauss declared at 57th Street Books on Wednesday evening.

Former Chicago magazine Editor-in-Chief Richard Babcock interviewed Strauss, who has written for The New York Times and Sports Illustrated, as part of a promotional event for Strauss’s new book, Worst. President. Ever. James Buchanan, the POTUS Rating Game, and the Legacy of the Least of the Lesser Presidents.

Strauss painted a picture of an inept man with complex intentions. “There is no evidence that he ever said anything bad in public about anybody,” Strauss said of the 15th president, adding that Buchanan, a Pennsylvania-born Northerner, “didn’t want to own slaves and didn’t believe in slavery for himself.” Buchanan’s reluctance to curb slavery as a whole—he felt its impractical economics would cause it to die on its own—would, however, doom his term in office.

According to Strauss, Buchanan intrigues historians for other reasons as well. A famed partier and the only bachelor president, he is suspected to have been gay, having lived with an Alabama Senator for several years prior to his presidency. Though in his book, Strauss says, “I conclude that he wasn’t [gay], only because I can’t prove that he was.”

Buchanan also remains “the most experienced man to run for office” (he is outstripped in terms of years in politics by Hillary Clinton, and then only because of her tenure as First Lady). Prior to the presidency, he served in both houses of the Pennsylvania state legislature, as a U.S. Senator and Representative, as Ambassador to Russia and Great Britain, and as Secretary of State. He ran for president three times, Strauss said, before garnering the Democratic nomination at age 65 by virtue of being “the guy that had been waiting for it all this time.”

The disasters Buchanan oversaw while in office are numerous. Most notable is the Supreme Court’s pro-slavery ruling on the Dred Scott case, released two days after Buchanan’s inauguration—and at least partly due to Buchanan’s petitioning Northern justices on the Court while still president-elect. As a result of new competition from slave labor, commerce slowed in Northern states, ushering in a long-lasting recession. Antislavery sentiment also strengthened, leading to the organized abolitionist movement that, according to Strauss, Buchanan would ultimately blame for inciting the Civil War. Seven states seceded during Buchanan’s five-month lame-duck period, after the election of Abraham Lincoln.

Strauss finished with an anecdote that he said best exemplifies Buchanan’s general distance from reality. In 1861, just after the Union’s crushing defeat in the Battle of First Manassas, Lincoln opened a letter from Buchanan—the only note Buchanan would ever write him—asking Lincoln to retrieve some novels Buchanan had forgotten in the White House and have his secretary send them to Lancaster, Pennsylvania. “He was just oblivious,” Strauss said, “even after the Civil War started.”