Survey Finds Dramatic Gap in Perception of Racism on Campus 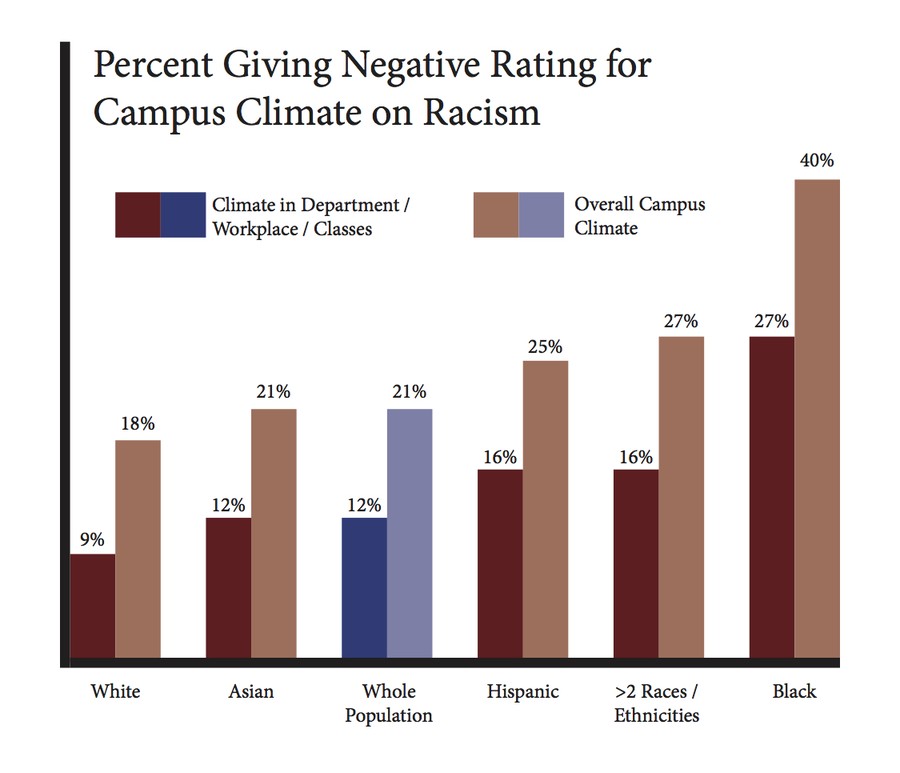 More than 20 percent of respondents found the overall environment on the University of Chicago’s campus racist, according to the results of a survey of campus climate conducted by the University in the spring and released today.

The report, which also measured the number of respondents who found the overall environment sexist (21 percent), unwilling to accommodate people with disabilities (14 percent), and homophobic (6 percent), noted that the survey sometimes found substantially lower numbers reporting bias in their classes, department, or work unit compared to the campus as a whole. Only 12 percent of people responding to the survey found this—what the report called their “proximal campus climate”—racist.

“This disparity suggests that there is incongruence on perception of the climate around homophobia between those most likely to be affected by homophobia and the majority of the campus community,” the report reads.

The survey was answered by 29 percent of the 12,384 students, faculty, and staff who received it. The race and gender of the people who opted to participate roughly reflect the demographics of the school, though Asian students were somewhat underrepresented and white students were overrepresented.

The survey also measured student responses on a variety of more specific questions about their life on campus. These responses indicated a gap between white, male, and heterosexual respondents and their classmates and co-workers. Sixty-nine percent of black students said their racial or ethnic group was not respected on campus, for instance, compared to 4 percent for white students. Forty-three percent of black students said they could not “fulfill the requirements of [their] coursework without unduly repressing [their] own identity, background, or experience.” Fourteen percent of all students said the same.

The survey was part of a pair of climate surveys launched in response to a petition launched in 2014. In the wake of a racist Halloween costume incident, a petition demanding a campus climate survey accrued almost 2,500 signatures. The University subsequently announced that it would conduct two such surveys.

The first, released in the spring, covered issues of sexual misconduct on campus. Based in part on the early results of that survey, the University made several policy changes, including extending sexual assault training to graduate and professional students, revamping O-Week sexual assault training for students in the College, and launching the UMatter website.

The second survey was developed by a faculty committee and a faculty working group, with reference to forums open to campus community members. According to a preliminary report, a campus-wide committee appointed by the administration will develop action steps based on the results of the survey.