The Delicious History of the Latke-Hamantash Debate

Professors debate the superiority of the latke and hamantash.

Latke? Or hamantash? Both fatty Jewish foods may bring a smile to bubbe’s and zayda’s (Yiddish for grandma and grandpa) faces, but which food is objectively better than the other? Is the latke’s circularity an indication that is it a reflection of some greater Platonic truth? Or is the hamantash more economically viable on international markets? The question as to whether the latke, a fried potato pancake, or the hamantash, a triangular cookie typically filled with jelly, is superior has occupied the minds of the University’s brightest scholars for 70 years since the Latke-Hamantash debate began in 1946.

The event found its beginnings with a smaller audience in Hillel. This style of humor caught on and grew into an event that hundreds of people crowd into Mandel Hall to watch. It became one of the University’s strongest traditions. The debate has featured some of the University’s most distinguished academics, including Milton Friedman, George Lederman, Allan Bloom, Martha Nussbaum, and Leo Strauss. The late Ted Cohen, professor of philosophy, moderated the debate for more than 25 years until he passed away in February 2014.

“Academia is in some sense a great institution that is separate from but interacts with the culture around it, so like religion it needs its rituals. It needs the things that are done every year,” said Professor Shmuel Weinberger, chair of the Department of Mathematics and a former moderator of the annual debate.

If you ask some members of the UChicago community whether the latke or hamantash is superior, they might tell you the it’s a mahkhloket—the Hebrew word in Jewish legal terminology for a disagreement. 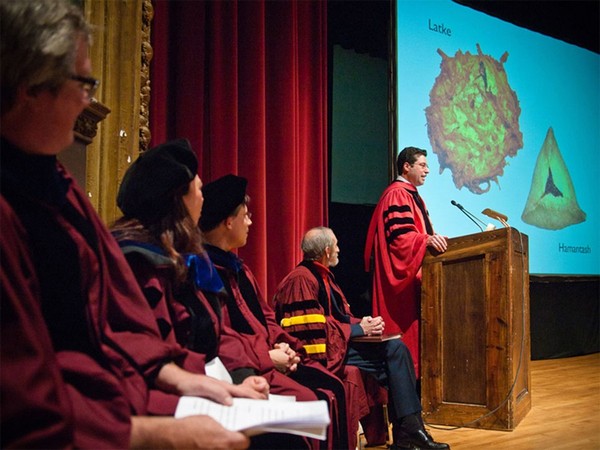 Some consider the Latke-Hamantash debate to be a dramatic iteration of the type of scholarship that has defined Jewish educational institutions for centuries.

“What makes the debate so funny is that, each year, it engages what is going on in the world around us in a vague satire that marks the moment,” she said.

Ari Mulgay, a third-year in the College who is doing research on previous debates, said that the whole schtick (the Yiddish word for nonsense) of the debate is a good thing since it fosters integration with the Jewish community.

“I think that schtick is significant,” Mulgay said. "I like seeing everyone in on Jewish schtick at events like this that are open and accessible to the wider community. And I think it’s just good fun to have this marriage between Jewish schtick and University jargon. It can be a delight to watch.”

The debate began with the purpose of integrating the Jewish identity of members of the University community with the secular culture of American academia in the 1940s. According to Ruth Fredman Cernea’s 2006 book The Great Latke-Hamantash Debate, scholarship at the University was hostile to bringing one’s ethnic identity into the classroom.The University imposed quotas on admitting Jewish students and hiring Jewish faculty, although not to the same extent as some peer institutions. This, in addition to the academic stress, the gloomy weather, and the strong Christmas atmosphere on campus that developed toward the end of the fall quarter, made many members of the Jewish community felt alienated on campus, Cernea writes.

The debate, founded by professors Saul Tax and Louis Gottstalk and Rabbi Maurive Pekarsky, was created as a means for Jewish students and faculty to openly take pride in Jewish culture and to reconcile their academic and Jewish identities. It used laughter as a response to the issues facing Jewish students.

Echoing the founders of the debate, Weitzman thinks that laughing is an important response to difficult times.

Editor’s Note: Steinmetz is on the leadership board of UChicago Hillel.