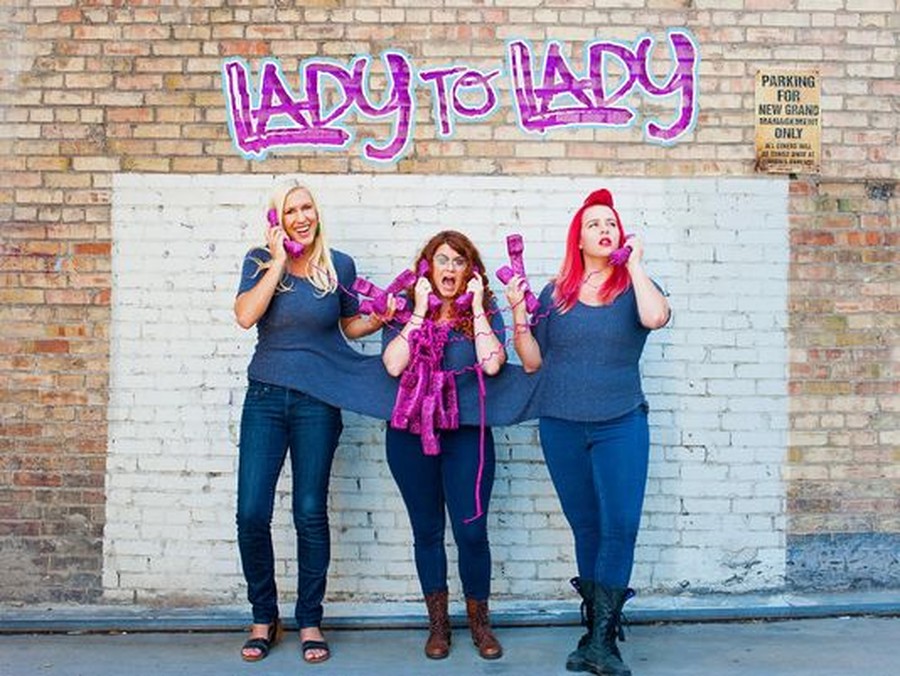 Tess Barker, Barbara Gray and Brandie Posey, are the ladies behind the podcast "Lady to Lady".

Courtesy of Lady to Lady

The voices in your earbuds are finally coming to life. The Chicago Podcast Festival debuted this weekend in theaters throughout the city, hosting comedians, actors, musicians, and storytellers who sang, laughed, cried, drank, told stories, and delivered social commentary, all while recording a podcast in front of dedicated listeners.

The festival was held on Thursday, Friday, and Saturday nights in theaters ranging from the Promontory in Hyde Park to the Steppenwolf Theater in Lincoln Park. Spread out in various theaters, film-festival style, the festival aims to reach out to as many community members as possible. It was created and produced by Jonathan Pitts, the current executive director of Chicago Improv Productions.

“The podcast went from being an odd, quirky thing that only a few people had done to a very emerging technology and an emerging art,” Pitts explains. “[They’re] only about five minutes away from hitting the mainstream.”

Tyler Greene, the festival’s artistic director, works for The Moth, a storytelling show in Chicago, and is an event producer for WBEZ radio. He chose a mosaic of podcasts for the festival, emphasizing diversity in all areas— recording location, genre, subject matter, and hosts—unified by a focus on comedy, storytelling and culture. There was everything from the tear-jerking show Crybabies to a podcast with a socio-political focus, Minority Korner. The festival showcased some well-established podcasts with larger audiences like Guys We Fucked, a self-described anti-slut-shaming podcast that currently ranks in the top 100 podcasts on iTunes, as well as more recent creations like The Room Where It’s Happening, a Hamilton podcast started over the summer.

Since Pitts’ group Chicago Improv Productions runs the event, all of the podcasts were completely unscripted, setting the Chicago Podcast Festival apart from most other podcast festivals, which typically feature pre-written shows with elaborate effects. This allowed for lively and spontaneous shows that fed off of the energy of the audience.

The audience on Thursday night laughed and applauded throughout the performance. When the podcasters asked listeners whether they listened to the show regularly, many raised their hands. They waited long lines to talk to them after the show was over, excited to finally join the conversations that they had been listening in on for so long.

While it might seem odd to make a podcast—usually recorded in a private space—in front of a live audience, Pitts argues that the setting creates intimacy instead of awkwardness. The convergence of the audience in a central location allows for listener communities to form. The podcast serves as a common interest, so that when the podcasters perform, “everyone in the room know the same quirks of those hosts,” Pitts said. This creates “an inside joke with the whole room.”

The comedy podcast Lady to Lady was featured at the Promontory on Thursday night. The three ladies behind the podcast are comedians—Tess Barker, Barbara Gray, and Brandie Posey—who described their podcast as “a candid hangout.” They bring on a guest for each episode, which have included comedians like Margaret Cho, French Stewart, and Rhea Butcher in the past, to discuss their lives, play games, and give advice through listener-submitted questions in a segment entitled “Lady Problems.” The women set few boundaries on what they are willing to share, making the conversation candid, unrestricted, and personal.

“We definitely fill a niche for a lot of people, because there are so few shows that are just for females sitting around, hanging out,” Posey said. Their audience is predominantly women, some of whom have few female friends or work in mostly male-dominated fields. This podcast thus serves as a place where these women “get their girl talk out.”

The Lady to Lady comedians have never performed at a festival exclusively for podcasts, but they have done live shows in the past on their own and at comedy festivals. Their content did not seem more restricted with an audience present. During the show, they discussed everything from their plans in case of an apocalypse to Barbara’s crush on the chef from their lunch that day (and her subsequent e-mail letting him know she is single and available), all while expressing their embarrassment, laughing, asking questions, and drinking.

The women described what it is like meeting their listeners. “You’ll be talking to them and playing it cool and then you’ll laugh genuinely at something they say and they look like a deer in headlights because they’re like, oh no that laugh is in 3-D,” Posey said.

Lady to Lady is broadcast on Maximum Fun, an independent podcast and radio production network. This network allows for collaboration and creates a community of podcasts that give the women creative freedom. “That’s what’s so great about a podcast; you’re not beholden to anyone,” Barker explained. “The world is our verbal oyster,” Posey added.

“Podcasting is a very democratic art form,” Pitts said, echoing this sentiment of creative liberty seems to be one of the most unique and appealing aspects of making podcasts, “The artists get to create whatever they want to create and then they find their audience. And it’s their audience. They don’t have to go through structures to achieve approval to get a movie up or a TV show up. They create the material themselves and then they put out there. Audiences respond to it or they don’t. And it’s a direct connection.”

Although this is only the Chicago Podcast Festival’s first year, its future looks bright, given the rapidly growing production and demand for podcasts. The audience response will likely guide the organizers’ plan of action in subsequent years.

What is the future of podcasts? It is unclear whether they will take over radio, but have nonetheless forced radio stations to adapt to modern times, as many radio shows now provide an on-demand service. The production of podcasts shows no signs of slowing down; there is an infinite number of topics for them to cover. “If you have an interest, you just type that word and add podcast, and you can find something,” Greene stated.

In an age where technology is making people more isolated, maybe podcasts can provide that togetherness we need. “As we have all gotten more separate from each other because of our phones, podcasts that come through our phones are kind of a way of reconnecting,” Pitts explained. “As human beings we still love stories…that’s what these podcasts are. They are niche, focused stories on demand.”