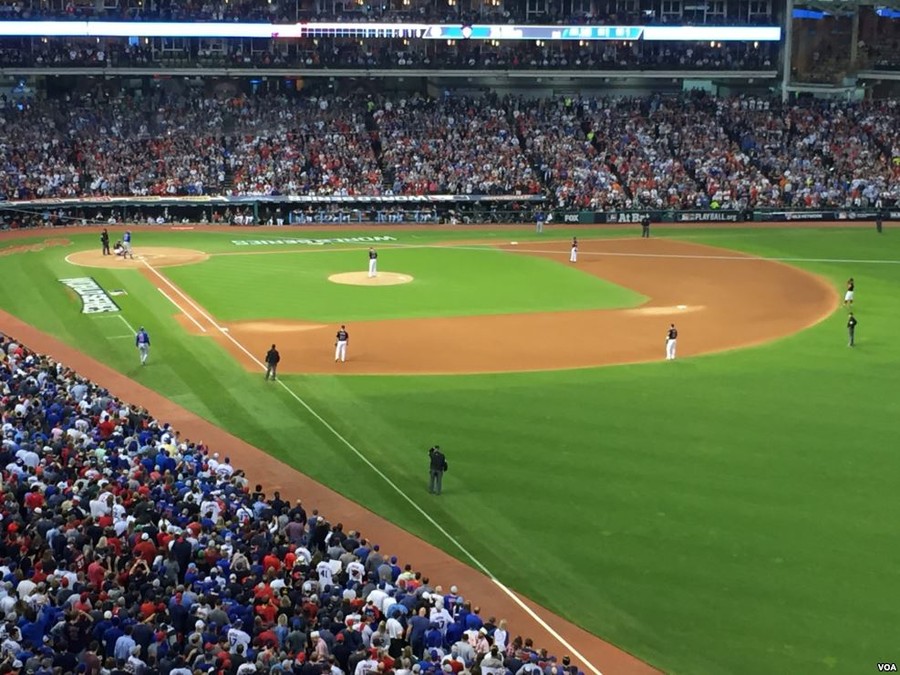 The Cubs play for their first World Series win in 108 years.

At 11:48 p.m. on Wednesday night, with every street in Wrigleyville packed to capacity, a city held its breath. Kris Bryant, with a smile on his face, picked up a weak ground ball and threw to first. However, the grass was wet from the rain that had poured on Progressive Field in Cleveland just an inning before, and Bryant slipped. As his throw went to first, a fandom that has experienced misery like no other, saw, for a moment, yet another heartbreak flash before their eyes. Then the ball settled into Anthony Rizzo’s glove, and the unthinkable happened. The Chicago Cubs won the World Series for the first time in 108 years.

The game itself was remarkable, an excruciating exercise in almost unbearable tension. The Cubs jumped out to an early lead thanks to a leadoff home run by Dexter Fowler, yet Cleveland drew even in the third when Carlos Santana drove in Coco Crisp with a single. However, the Cubs struck back, scoring two runs in the fourth inning and adding another pair in the fifth. Possessing a 5–1 lead, the team looked to be in the driver’s seat.

Postseason hero Jon Lester was called out of the bullpen to bridge the gap between starter Kyle Hendricks and closer Aroldis Chapman. While two runs scored on a wild pitch of Lester’s that hit catcher David Ross in the head, Ross managed to redeem himself an inning later by hitting a homerun to dead center. With the score locked in at 6–3, Lester dealt into the eighth inning, when manager Joe Maddon signaled to the bullpen and Chapman entered the game with a runner on first.

Things instantly fell apart for Chapman, who had thrown 20 pitches in Game Six the night before. He allowed a run-scoring double to pinch hitter Brandon Guyer, and then after a prolonged battle with centerfielder Rajai Davis, surrendered a game-tying home run that sent the Cleveland crowd into a frenzy. As neither team scored in the ninth inning, the game already had the makings of a classic. Then came the rain. While most rain delays are cumbersome bores, this one only served to amplify the tension. The people standing at the intersection of Addison Street and Clark Street simultaneously couldn’t wait for the game to resume and hoped that it never would.

Kyle Schwarber led off the 10th inning with a single and was promptly removed for pinch runner Albert Almora Jr., who advanced to second when Bryant flied out to the wall. Rizzo was intentionally walked to set up the double play, but the strategy was for naught as Ben Zobrist doubled to left, scoring Almora. Another walk loaded the bases and a single by Miguel Montero drove in one more. The Cubs led 8–6 heading into the bottom of the 10th, and a date with destiny seemed to be in the books.

However, after getting the first two outs quickly, reliever Carl Edwards Jr. walked Guyer, who promptly took second base. This brought up eighth-inning hero Davis, who singled to center to score Guyer and bring the series-winning run to the plate. Maddon made one more walk out to the mound to call in reliever Mike Montgomery. Two pitches later and the Cubs were world champions.

On a superficial level, Wednesday night’s baseball game was an instant classic. For the city of Chicago, it was so much more. When the final out was recorded, Wrigleyville exploded into a cacophony of yelling and shrieking and crying—stunned disbelief combined with overwhelming exuberance. Although the neighborhood already seemed stuffed to the brim, North Side fans seemed to trickle out of their apartments and march toward Wrigley Field.

It was a pilgrimage, as if the haunted ivy walls of the stadium were calling out to all. Up Clark Street and across Waveland Avenue they streamed, filling the streets with verse upon verse of “Go Cubs Go.” They formed drum circles, embraced strangers, sprayed celebratory beers up into the mild November night. For their entire lives they had watched their Lovable Losers come up short. But for that night, there was no next year to wait for. The Cubs were still beloved, but they were losers no more.