DAPL Protesters Occupy Citibank on Ellis: “Who Shuts Shit Down? We Shut Shit Down” 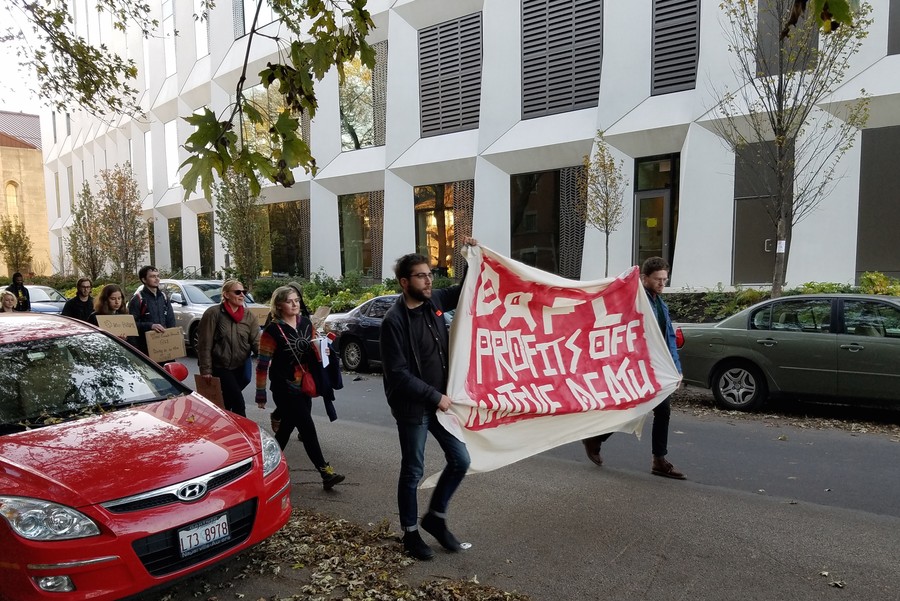 Protesters carry a sign that reads "DAPL Profits off Native Death" as they walk north on Woodlawn Avenue.

The activists briefly occupied the lobby of the Citibank on South Ellis Avenue, playing American Indian electronic music over a loudspeaker and chanting slogans including “Who shuts shit down? We shut shit down.” Citibank is one of 17 banks that have financed DAPL’s construction. A protest at Citigroup’s headquarters in San Francisco the same week led to 12 arrests.

The event was one of several at universities across Chicago on Friday. Activists at the University of Illinois at Chicago, Loyola, DePaul, and Northwestern also held campus demonstrations. The groups then met downtown for a rally outside the Chicago district office of the Army Corps of Engineers on West Jackson Boulevard and South La Salle Street.

The rallies, including the one at the University of Chicago, were organized by the group Chicago in Solidarity with Standing Rock, which according to its Facebook page was asked by members of the Tribe to raise awareness about the issue in the city. The group is protesting the Army Corps of Engineers for its role in approving the pipeline.

At 3 p.m., protesters with signs reading “Water is life” and “You can’t drink oil”, as well as a large banner with the words “DAPL profits off native death” in spray-paint gathered in the quad. The demonstrators numbered around 30, including several members of the Revolutionary Communist Party, a group that has participated in several rallies on campus recently and that had one of its members arrested by the University of Chicago Police Department (UCPD) for trespassing in Baker dining hall.

One of the rally’s organizers, who asked to remain anonymous, spoke briefly about the purpose of the event over the megaphone. “Human error ensures that our water systems are going to be corrupted, they’re going to be damaged, and it’s going to be a horrendous fact if we have to explain to future generations what clean water tastes like.”

The demonstrators marched through the arch of Levi Hall to gather in front of the Citibank branch on South Ellis Avenue before moving inside. Filling the lobby and much of the bank itself, the protesters played music and chanted as bank employees looked on. After about 10 minutes, the demonstrators moved back outside, the music attracting the attention of bystanders, including a high school tour group. 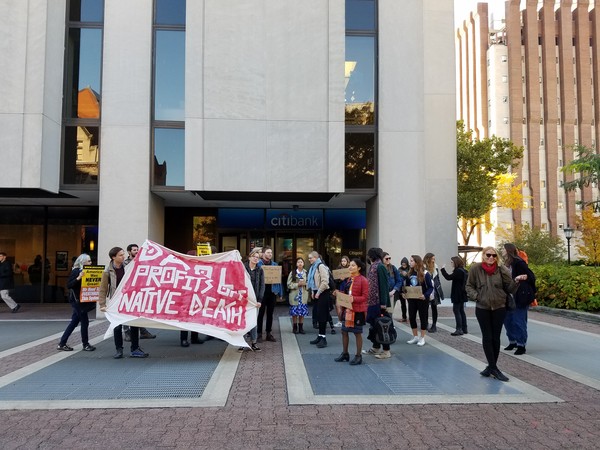 The protesters hold signs in front of Citibank on Ellis Avenue.

From Citibank, the protestors marched north, with multiple UCPD and Chicago Police Department (CPD) vehicles following behind. The demonstrators continued past the Reg and walked through the quad before moving back toward the intersection of 55th Street and South University Avenue to catch a bus heading downtown to the main rally.

At one point, a CPD squad–car turned on its sirens and pulled up alongside the demonstrators after one of the group pulled the metal cart holding the megaphone speaker into the road, but turned them back off soon after. 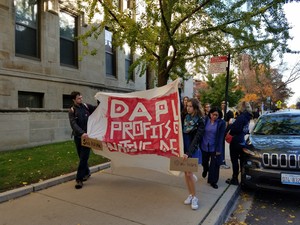 The campus demonstrations were directed at financiers of DAPL, which members of the Standing Rock Sioux Tribe oppose because the pipeline would run upstream of their primary water source on its current planned route. The tribe, as well as environmental activists, are concerned about the possibility of a spill that could irreversibly contaminate their drinking water. Tribe members have also argued that the pipeline passes across culturally and historically significant lands, and American Indian artifacts have been unearthed during the pipeline’s construction.

Protests against the pipeline have led to hundreds of arrests, and police have used pepper spray, rubber bullets, and pit bulls against participants. Authorities say that some of the opposition protesters had previously became aggressive.