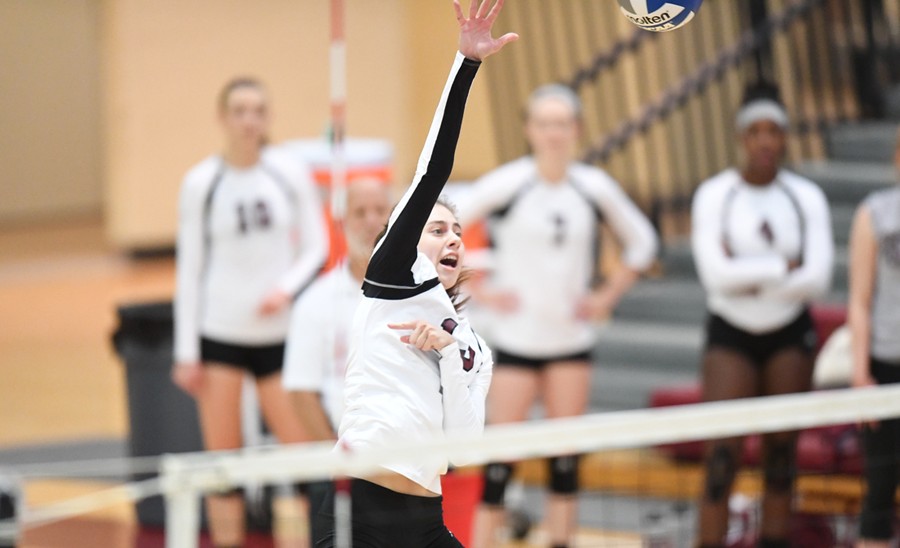 Second-year outside hitter Audrey Scrafford rises high above the net for to strike the ball.

This weekend, the volleyball squad competed in the UAA Championships in St. Louis. Heading into the tournament, the Maroons were 7–0 in UAA round robin play and owned the No. 1 seed in the tournament.

The second match of the day proved to be more challenging for the Maroons as they faced the No. 21 ranked Carnegie Mellon Tartans. It was a back-and-forth battle as Carnegie struck first, taking the first two sets; however, the South Siders fought back and evened the match up with two sets of their own. In the deciding fifth set, the Tartans came out on fire, at one point leading 10–5, and finished the set off with a score of 15–11.

With the loss, the Maroons were then set to play the host, Wash U, for third place. In the battle the Maroons struggled early, dropping the first two sets to the host. The Maroons took the third set hitting .419. In the fourth set, Chicago had the lead at 15–8, but Wash U stormed back to win the set with two kills 26–24.

Fourth-year libero Mary Claire Tuohy said of the UAA tournament, “Our earlier performances during pool play put us in a position to win. And we played hard this weekend. Even though things didn’t end the way we were hoping, that's all you can ask for.” Looking back at the two losses to end the tournament, Tuohy said, “Unfortunately, when playing good teams like Carnegie Mellon and Wash U this weekend, the slow starts really hurt us. Taking Carnegie to five games after a two-game deficit was great. However, had we started out playing that match like we finished playing, I think the outcome would have been very different.”

After a weekend that did not go quite as planned for the Maroons, Tuohy was proud of how hard her team battled. “One of our starting outside hitters twisted her ankle in the first match against Brandeis and was out for the Carnegie Mellon and Wash U game. I don’t think there are many teams who could come together the way we did after losing such an important player and still play as hard as we did.”

The Maroons were not selected to be part of the 2016 NCAA volleyball tournament despite a tremendous year in UAA play. The Maroons will lose some tremendous fourth-years and should be proud of how well they played throughout the year. The South Siders should carry over their success to the next season with more than half of the team's being first- or second-years.