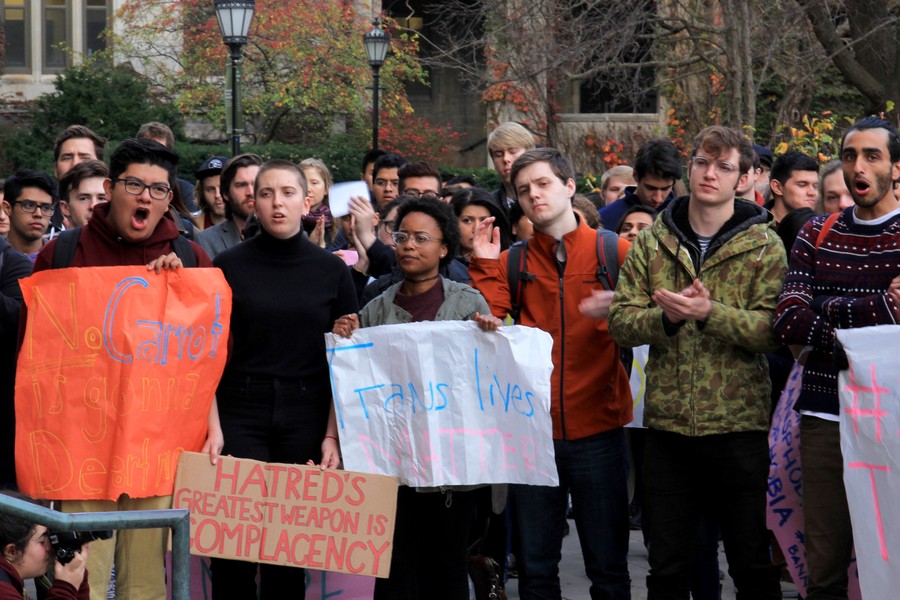 College Council (CC) members are considering a resolution that would call on administrators to make the University of Chicago a sanctuary campus for undocumented students.

At its first winter quarter meeting on January 3, CC will vote on a resolution recommending the prohibition of immigration enforcement officials from entering campus without a warrant. It additionally recommends that the University and the University of Chicago Police Department (UCPD) publicly vow not to take an active role or voluntarily participate in hypothetical deportations or forced removals by the U.S. Immigrations and Customs Enforcement (ICE).

CC will also vote on a resolution calling for the creation of an advisory council to be tasked with “protecting the urgent interests” of undocumented, “DACAmented,” and international students.

“DACAmented” refers to students protected under the Deferred Action for Childhood Arrivals (DACA) immigration policy. DACA is an executive action ordered by President Barack Obama in 2012 that protects children and young adults who entered the United States illegally from deportation.

“As a DACAmented student here at the University, I've been worried to a very high degree regarding my future not only as a resident of the country, but as a student here in the College,” Rodriguez told The Maroon.

“Out of this concern, I approached my [Student Government] representatives for help in writing these resolutions in order to push the administration to release formal plans about what they intend to do for my community. Schools throughout the country have called themselves sanctuary campuses and have explicitly stated that they will not cooperate with ICE, so I have high hopes that if the University is in fact, as progressive as it paints itself to be in the various e-mails it sends out, this one should be an easy decision to make.”

“They just do these things. It doesn't violate any by-laws for them to make demands they can't enforce,” Max Freedman, the Student Government (SG) parliamentarian, wrote to The Maroon. “In reality, they have no authority to create an administrative board like this. They do have the power to create a standing committee of the college council to address this issue.”

The proposed advisory council would be composed of two undocumented students, two students protected by DACA, two international students, and six appointed administrators and faculty—at least one with expertise in immigration policies.

The advisory council would conceal the identities of the students appointed to the advisory committee, per the resolution. Minutes from council meetings would be made public.

The proposed council would be tasked with ensuring that faculty and staff be required to complete training “specific to undocumented and DACAmented students” by the beginning of the next academic year.

The resolution sets a deadline of January 31, 2017 for both the appointment of students to the advisory council and the release of a public plan of action created by that council—leaving just 28 days for CC to be convened and write the plan should the resolution pass. SG originally planned to vote on the resolution at a meeting next Tuesday, but decided to delay the vote until their first meeting next quarter.

In a November 18 e-mail to all members of the University community, Provost Daniel Diermeier wrote that “the University uses private funds to meet the full demonstrated financial aid needs of undocumented students in the College.” The other resolution under consideration by CC suggests an emergency fund be set aside from such private funds to increase financial aid support for current undocumented and DACAmented students in the event that DACA is terminated.

The resolution also seeks to pressure the University to provide undocumented, DACAmented, and international students with “free legal counseling” if DACA is terminated.

Since Donald Trump was elected, several universities and colleges across the country have felt a push to become so-called “sanctuary campuses,” characterized by limited cooperation with federal immigration authorities. The University of Pennsylvania has declared itself a sanctuary campus, while Princeton has opted out—President Christopher Eisgruber sent out a campus-wide e-mail saying the idea has “no basis in law.” Student government at the University of Wisconsin–Madison passed a resolution similarly pressuring the university to become a “sanctuary campus.”

The location for the January vote has not yet been announced; all CC meetings are open to the University community.

The full text of the resolutions:

One calls for a "sanctuary campus." The other asks for student representation on a council.