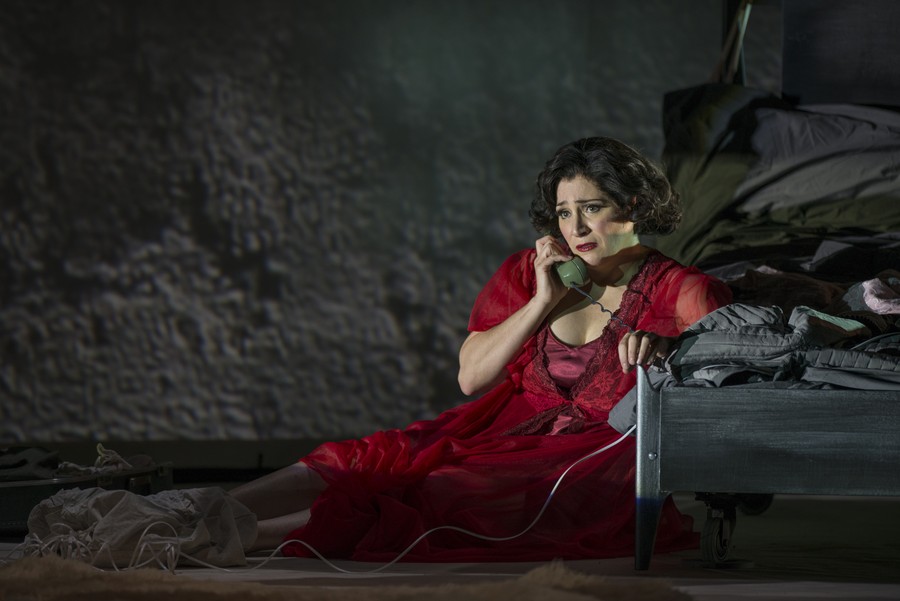 Relatives double over at the bedside of a dead man. They look inconsolable—trembling hands, wan faces, low moans. They mourn.

Hands wrestle drawers, tear envelopes. Faces peer into corners, squint at loose paper. Where, where is it? The will! The will!

Puccini’s Gianni Schicchi is a masterpiece of black comedy. Fast-paced and deeply ironic, the one-act opera packs a twisted world of music and text into only 50 minutes. Pity that the latest production at Chicago Opera Theater (COT)—which ran on February 6 and 14—chose slapstick over nuance.

So this Buoso Donati fellow is very rich and very dead. His family finds his will unfavorable to their purposes: in particular, handsome Rinuccio (Christopher Tiesi) cannot marry poor Lauretta (Emily Birsan) without an inheritance. The Donatis call on her wily dad, Gianni Schicchi (Michael Chioldi), to mitigate the will…but may get more than they bargained for.

I’m not a libretto purist. By all means, translate away—a Mozart or Donizetti or Lehár can be just as fun and smart in English. But Schicchi loses a lot in translation, especially as Puccinian comedy relies so heavily on the text. Punchy wordplay (“vecchio / Fucecchio”) so natural to Italian becomes labored at best (“oldest / Fucecchio”). Questionable decisions are made to better suit the meanings to an audience: the choice to translate “da morto son rinato” (“I have returned from the dead”) as “I feel like a different man” swaps menace for mockery, which in context I don’t agree with.

More forgivable but still baffling was production designer Andreas Mitisek’s use of video projection. The backdrop looked like the ’60s as a Windows 95 screensaver—tie-dyed and distastefully neon; its animation synced neither with music nor with plot. My theory? The wallpaper killed old Buoso.

Michael Chioldi played the titular Florentine trickster with robustness and magnetism. His ample baritone added bite to Schicchi’s wry sarcasm, easily projecting over a sometimes unruly orchestra. I found his slapstick delivery at times exaggerated but generally entertaining throughout the performance.

Rinuccio was hot. Christopher Tiesi’s boyish good looks lent his character visual realism, for sure. Yet his tenor lacked heft, pairing an attractive middle register with a top that dispersed like soap bubbles. The orchestra was partly at fault—overzealous brasses drowned out Rinuccio’s showpiece “Firenze è come un albero fiorito” (“Florence is like a flowering tree”).

The opera’s pivotal moment belongs to Lauretta: Her aria, “O mio babbino caro” (“Oh my beloved father”), breaks the chaos for a moment of sincere beauty. This was Emily Birsan’s moment. Her silky soprano delivered innocence through deft phrasing and dynamic control.

Poulenc’s La voix humaine is poignant where Schicchi is cynical. A one-act drama with one singer, Voix at COT showcased the formidable voice and character abilities of soprano Patricia Racette.

A woman, Elle, speaks with her ex-lover over the phone. She is cool, frivolous…at first. As their conversation continues we hear her growing vulnerability—is the phone cord between them a noose or a lifeline?

As Elle, Racette narrates half the story. She questions and confesses through voice and body language. Her soprano is remarkable for its spectrum of expressive color. Racette understands that desperation and volume don’t have to be the same: her trembling pianissimo carries as much weight as her full-force belt.

There’s also a sensitivity to Racette’s interpretation that extends to the words themselves. Trying to get through to her ex, Elle repeats certain phrases: “tu es gentil” (“you are kind”); “tout est ma faute” (“all my fault”); “je t’aime” (“I love you”). Racette worked subtle alchemy in the meaning of what she sings. She combines explicit cues—text, voice, body language—with implicit characterization. What Elle hears is unknown to us. Her responses give context while preserving ambiguity: it is Racette’s indirect reacting that lends so much power to her performance.

The orchestra in Voix is active, not atmospheric: it underlines Elle’s psychological state from calm to pique to panic. Conductor Ari Pelto led the Chicago Sinfonietta in an intelligent and balanced reading of the score that complemented Racette’s instrument.

COT stakes its mission in realizing “new and rarely performed works.” Its February double bill made a persuasive case for 20th-century works outside the grand opera repertory.