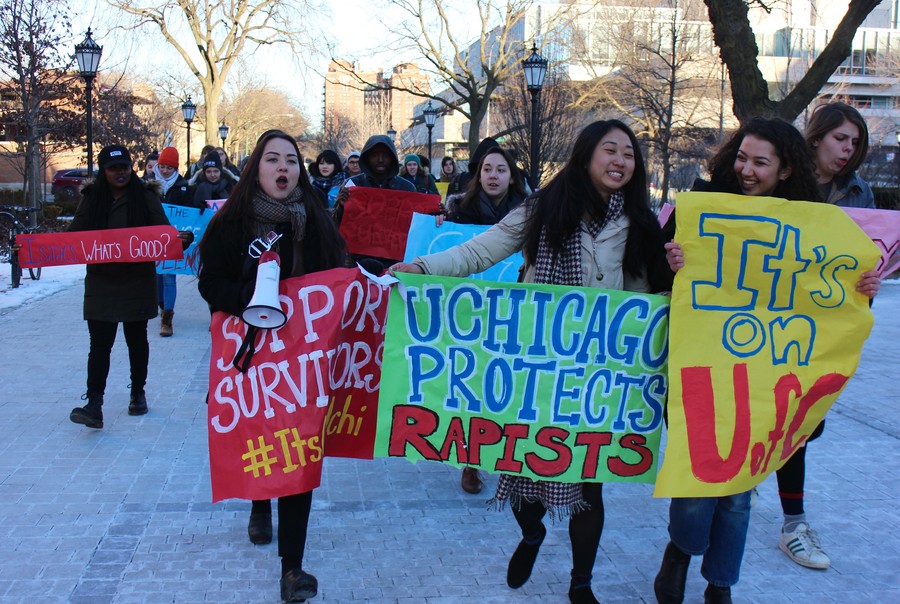 Students march with the Phoenix Survivors Alliance on Thursday to present a list of demands to Provost Eric D. Isaacs.

On Thursday afternoon, approximately 35 students marched from Booth Quad to Levi Hall to deliver Provost Eric D. Isaacs a list of demands by the Phoenix Survivors Alliance (PSA), and to request a meeting between PSA and Isaacs. According to PSA organizers, Isaacs has denied previous requests to meet with them.

PSA is an RSO that provides information, advocacy, and support to sexual assault survivors at UChicago.

Protesters chanted slogans such as “U of C is out of line/Take a look at Title IX” and “Rape culture is contagious/Come on, admin, be courageous,” and held signs which read “Silence is violence” and “Less theory, more action.”

Outside Levi, student speakers from PSA spoke in favor of PSA’s demands and outlined ways they claim the University fails to comply with Title IX. Speakers referenced Jason Lieb, a former professor in the Department of Human Genetics who was hired despite previous allegations of sexual misconduct and who recently resigned after violating the University’s Policy on Harassment, Discrimination, and Sexual Misconduct.

“Recent events on campus have called into question what the University is doing to prevent sexual assault. In these turbulent times, the University’s silence and inaction speaks volumes. They are not compliant with federal law and furthermore, there is no system of accountability, much less transparency,” second-year Julie Xu, a member of PSA who spoke at the protest, said.

According to University spokesperson Jeremy Manier, the University immediately began an investigation into the allegations against Lieb after receiving reports of his misconduct during an off-campus retreat in November. Following the investigation, University Title IX Coordinator Sarah Wake concluded in January that Lieb had violated the University’s Policy on Harassment, Discrimination, and Sexual Misconduct in January. Lieb, who took a leave of absence at the onset of the investigation, resigned on January 21, before the disciplinary process was completed.

After the students spoke, Meg Dowd and Simone Brandford-Altsher, second-years and co-leaders of PSA along with sixth-year Olivia Ortiz, delivered the list of demands to Isaacs’s office, but were not able to speak to him personally. Protesters then dispersed, chanting “We’ll be back” and leaving their signs outside of Levi. 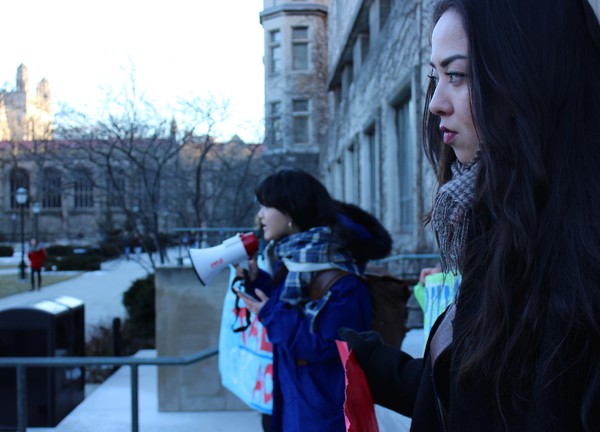 According to the PSA, the University is in violation of Title IX by failing to offer comprehensive education regarding the prevention of sexual assault, revealing names and information about survivors of sexual assault, neglecting to offer adequate training about mandatory reporting responsibilities, and violating the Clery Act, which legally obligates colleges to report crimes on campus, by not sending security alerts regarding sexual assault on campus.

The PSA also says that Belinda Cortez Vazquez’s appointment as both student Title IX coordinator and associate dean of students for student affairs is a conflict of interest and violates a Title IX mandate saying that the Title IX coordinator’s role in that capacity must be their primary position.

They also demand that the University hire more staff to work alongside Title IX coordinator, release a transparent budget of funds allocated to sexual assault programming, create a committee to allow student input on hiring decisions, and provide a timeline for new hirings.

In a statement, Manier disputed several of the PSA’s allegations of Title IX noncompliance.

“As University policy states, ‘Mediation will not be used to resolve complaints of alleged sexual assault, which require more formal investigation.’ Staff members and others who respond to cases of sexual assault work diligently to maintain the confidentiality of those who have come forward to report instances of sexual assault. The University also routinely issues security alerts regarding crimes that occur on campus and related properties, which represent continuing threats to the campus community. Alerts may not be sent if there are factors that reduce the level of threat to the community, such as the apprehension of an alleged perpetrator,” Manier wrote.

He also said that the University is currently implementing additional training related to sexual assault prevention. 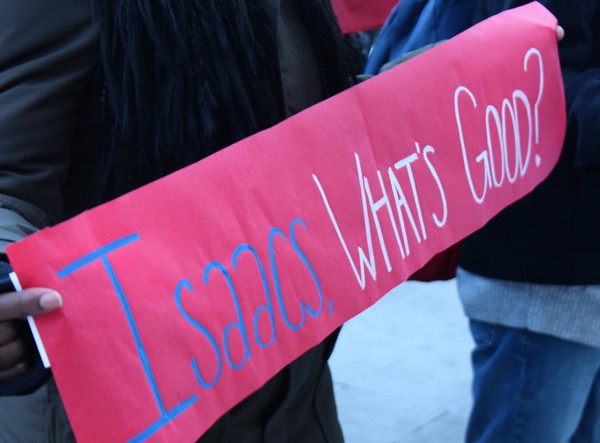 Signs left outside Levi Hall after the march.

In an e-mail sent to students, faculty, and staff on Monday, Isaacs announced several changes to the University’s policies and programs regarding sexual misconduct.

Isaacs mentioned several changes the University has already put into place, including offering new preventative training for graduate students, redesigning the training required for first-year students during Orientation Week, creating umatter.uchicago.edu to provide a space for University policies and resources related to sexual assault, and improving education regarding confidentiality, consent, and reporting obligations.

In a public response to Isaacs’ email, the PSA praised the changes but stood by their demands, including more support for Resources for Sexual Violence Prevention and Student Emergency Response Services, as well as a meeting with Isaacs.

“We are very excited to see the University making these changes. However, we cannot ignore that there are many changes yet to be made,” PSA wrote in the statement.