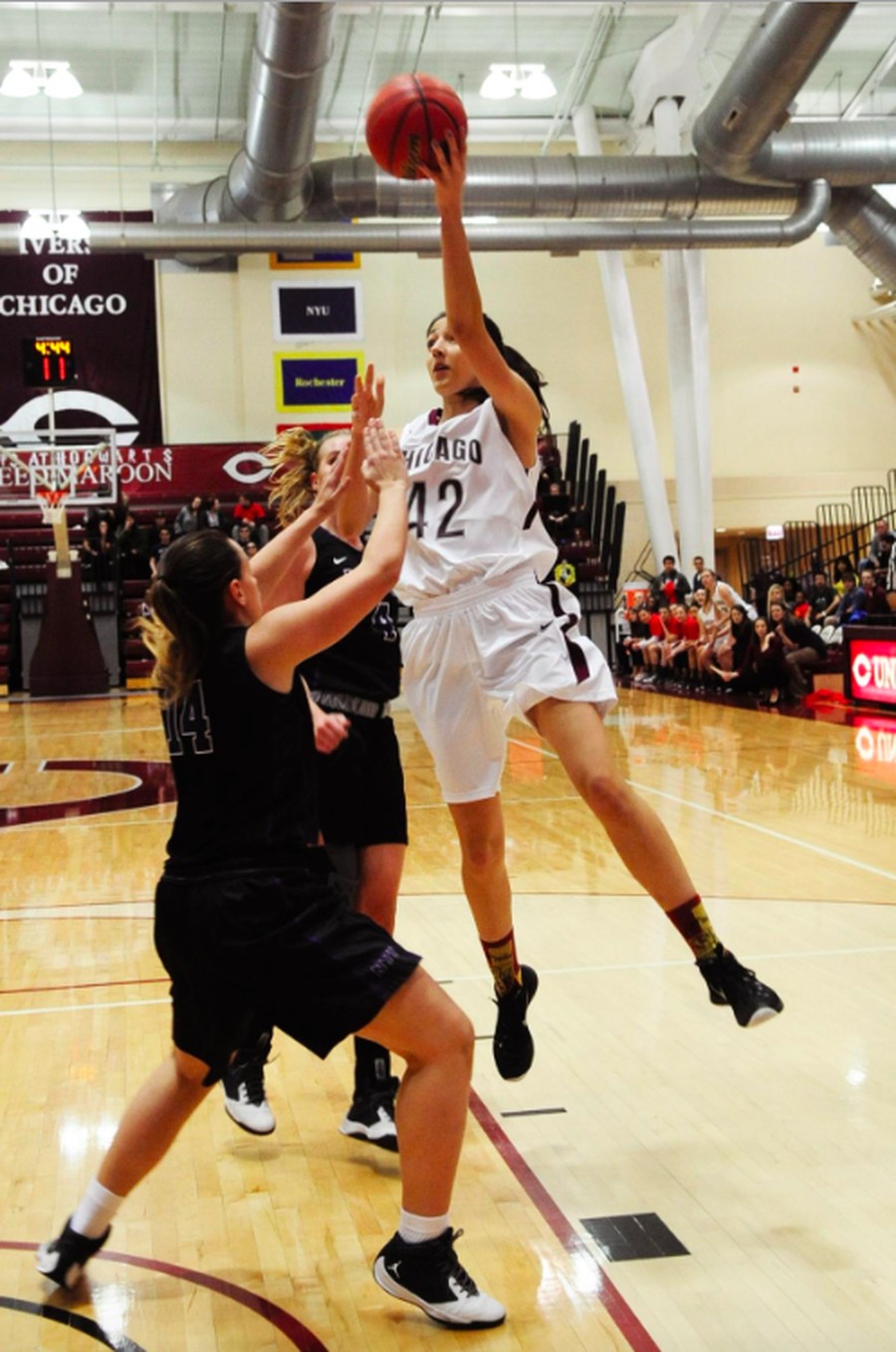 Over the weekend, the Maroons fought hard on their home floor and earned back-to-back victories against two tough conference opponents. On Friday, the team rallied in the second half to defeat the Emory Eagles by a score of 79–73. Then on Sunday, Chicago shocked No. 7 Rochester. The South Siders relied on their relentless defense in the 58–56 upset victory over the Yellowjackets. With these results, Chicago now holds a 12–6 overall record and improves to 4–3 in UAA play.

In the first matchup, both Chicago and Emory hit the ground running. The Maroons jumped out to an early lead, thanks to six straight points by first-year guard Jamie Kockenmeister to open the game. But the Eagles fought back and regained the advantage after going on an impressive 11–2 scoring run. After that, Emory remained ahead for the remainder of the first half, taking a three-point lead into the break.

When the Maroons returned to the floor for the second half, the squad turned up the heat.  Chicago scored 22 and 24 points in the third and fourth quarters, respectively. In the same span, the squad held its opponents to just 37 total points, and ultimately earned a six-point win. On the day, the South Siders shot 45 percent from the field, and 35 percent from long range. The team also managed to capitalize on Emory’s mistakes by scoring 21 points off turnovers.

All five of the Maroons’ starters finished with double-digit points. Third-year guard Stephanie Anderson led the team with 16 points and also grabbed 6 rebounds. Fellow third-year Britta Nordstrom added 14 points of her own.  Fourth-year Caitlin Moore and second-year Elizabeth Nye each scored 13 points from the guard position. Finally, Kockenmeister rounded out the starting five with 11 points.

On Sunday, the Maroons suited up again to face nationally-ranked Rochester. In this low-scoring chess match, each team depended on its defense to come up with key stops throughout the contest. Neither team ever gained a large advantage; remarkably, the score was tied at the end of the first, second, and third quarters.

With the game knotted at 44 all, the teams returned to the court for the final period of action. For the first few minutes of the fourth quarter, the teams traded blows. With two minutes and 45 seconds left in the contest, Rochester had gained a four-point advantage, but a slicing layup by Moore cut the lead in half.

Then, following misses by both teams and a Rochester defensive rebound, second-year guard Madison Dunbar appeared out of nowhere to steal a pass in the backcourt and made an easy layup to tie the score. Dunbar’s defense was arguably Chicago’s greatest asset on Sunday. She pressured the opponents’ guards in the backcourt and managed to swipe three key steals. Her pestering defensive strategy also forced a handful of travels and a lane violation that returned possession to the Maroons at a key moment early in the fourth quarter.

With the score tied at 54–54, Rochester failed to convert on offense and handed the ball back to the Maroons. On the ensuing possession, Anderson scored the go-ahead layup with 36 seconds remaining. Then, after another Yellowjackets miss, Nye was able to snag the game-clinching rebound and the Maroons ran the clock out.

Reflecting on the successful weekend, Dunbar said, “This week we had a strong week of practice and that finally translated into two wins in one weekend.” She added, “We had a stellar weekend in terms of rebounding and crashing the boards. We also emphasized playing team basketball, which means sharing the ball on offense and buying into our team system on defense.”

This upset marked Chicago’s first win over a nationally ranked team this season.  In the contest, Nye led the team with 13 points and Dunbar followed closely behind her with 11.  As a team, the Maroons shined on defense, forcing 24 turnovers and holding the Yellowjackets to 38 percent shooting.

All in all, this weekend featured two great wins for the South Siders, who are now halfway through their UAA schedule. Strangely enough, the Maroons will hit the road next weekend to face the same two teams.

“As we head into next weekend we will definitely focus on improving ourselves. We have already scouted both teams and know what to expect. So this week of practice we will focus on making ourselves better as a team so we can achieve the same result,” Dunbar said.

This weekend, the Maroons will travel to Georgia to take on Emory, and then to New York to face Rochester. Chicago tips off against the Eagles at 6 p.m. EST on Friday at the WoodPEC Gymnasium.