"Secrets of a Trumpet suggests mystery, but so much in the exhibition conveys openness." 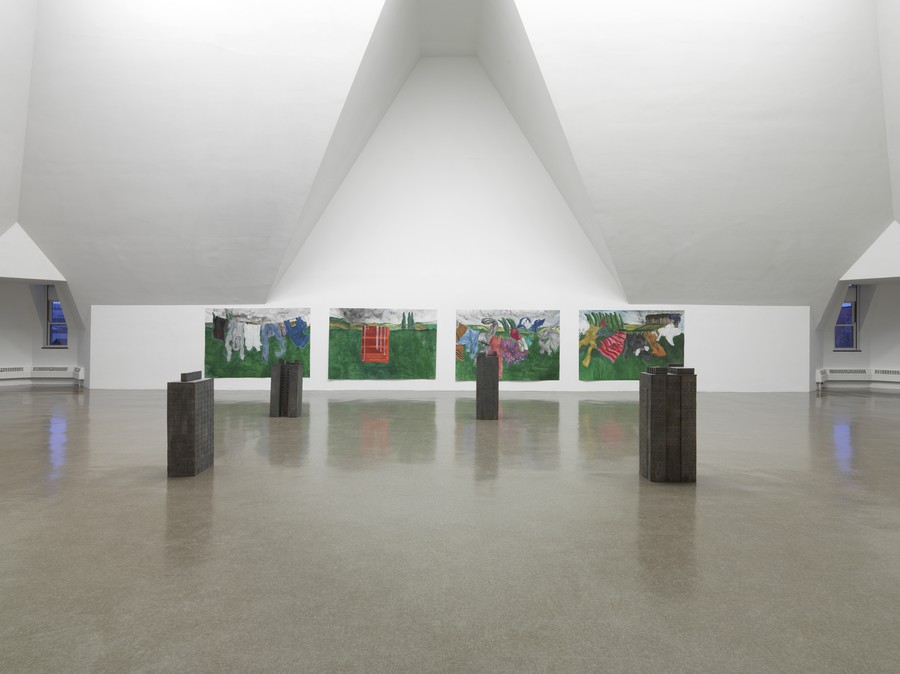 Courtesy of May Huang | The Chicago Mar

Many students have seen it on the grass just outside Gates-Blake and posted a picture of it on their Snapchat stories: a short, bronze otter holding a baseball bat between its paws, wearing a cap and a contented look. Those who are curious about its origins need only visit the fourth floor of Cobb, where the Renaissance Society is featuring the German artist Peter Wächtler’s latest exhibition, Secrets of a Trumpet.

The otter was sculpted before Wächtler created the pieces for the exhibition, most of which were completed during his six-week stay in Chicago. Half of its central laundry line, however, was painted back in Brussels.

“The motif of the laundry line came a little bit from the past,” says Wächtler, who wanted to paint something that would “animate the space” of the exhibition. Indeed, the exhibition’s quadrangular arrangement, which is reinforced by the rectangular positioning of the bronze apartment block sculptures at its center, contrasts sharply with the various clothing items billowing in the wind on the laundry line. The natural landscape behind the line, which spans four large watercolors, gives the exhibition a vast sense of space that the buildings oppose.

Wächtler says that he painted the watercolors while “playing with the idea of cinematic shots.” This idea of incorporating film scenes into his art is also echoed by the “storyboard sketches” of Teddy Boys that he paints on the four boxes at the front of the exhibition. The figures on the boxes, he says, “[try] to add a little of glamor and class to their working class lives, [almost living] a life that is edited”—as if in a movie. Like our schedule-packed days, this editing distracts us from urgently getting in touch with our lives.

We see such a dark side in Wächtler’s other work, too. Wächtler likes using animals because they are accessible and can evoke empathy: A bronze relief at the start of the exhibition shows a cat sitting on the fence, with a boot and can being thrown at it. “If you take it seriously, it’s horrible,” Wächtler said.

Similarly, while he says that the “laundry line is a holistic symbol of a good day outside,” the storm behind it gives the scene a sense of impending doom. Even the “monolithic buildings”—sculptures that do not depict outward disaster—carry connotations of “social crises and social conflicts.”

Yet perhaps Wächtler would belabor this analysis. When talking about the title of the exhibition, Wächtler brings up the idea of “expression and non-expression.” He notes that people can “make things complicated” by being so “deeply involved in hiding the meaning behind the artwork.” Speaking about his own art, he says that he tries to “make it very simple although it isn’t, somehow,” even though he uses simple objects such as apartment blocks and the laundry line.

Secrets of a Trumpet suggests mystery, but so much in the exhibition conveys openness. Despite the various elements Wächtler portrays in his exhibition—poetry and sculptures, humans and animals, exposed areas and confined space—they ultimately come together in a simple and cohesive way that conveys completeness.

Secrets of a Trumpet runs through April 3 and is supported by the Institut für Auslandsbeziehungen and the National Endowment for the Arts.