Solstice on the Park Apartment Complex Back on Track 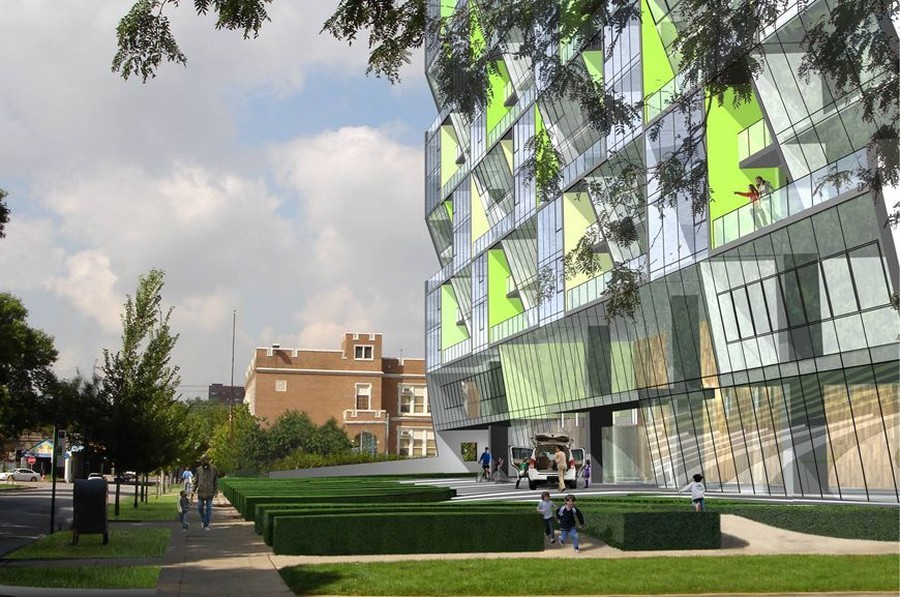 The development of Solstice on the Park, a high rise building with 250 apartment units designed by Jeanne Gang, recommenced last week. The new proposal for the building, which will be on the northwest corner of East 56th Street and South Cornell Avenue, was approved last week on February 18 at the City of Chicago Planning Commission hearing.

Solstice on the Park was designed in 2006 by Jeanne Gang of Studio Gang Architects and is being developed by Mac Properties. Gang, a MacArthur Fellow and Founding Principal of Studio Gang, is also the architect of many other works such as the WMS Boathouse at Clark Park and the Nature Boardwalk at the Lincoln Park Zoo. The design of Solstice on the Park was influenced by the angles of sunlight on June 21, the summer solstice. The façade is made up of windows with certain sections tilting inward at 71 degrees, creating their own shading system.

Originally, the building was planned to be a 26-story high-rise containing 145 condominiums and an underground parking garage. After being postponed due to the 2008 economic recession, the proposal was revived in 2015 with new alterations. The new design, presented in 2015, replaced the larger condominiums with 250 smaller apartment units and certain floors for a hotel.

Peter Cassel, Director of Community Development at Mac Properties, said that discussions with the community and neighbors in 2015 centered on concerns about the height of the parking structure on the north end of the site and the plans for a potential hotel.

The proposal presented last week addressed those concerns. It proposed a reduced height, a new façade to the parking structure, and no hotel. There were no changes to the underlying zoning of the structure from the 2015 plan, and no subsequent objections or adjustments made to the proposed plan after the hearing. As of now, Solstice in the Park will be a 26-story apartment complex with 250 units and an underground parking garage located next to Bret Harte Elementary School.

In preparation for construction, precautions were taken to assure the safety and to minimally impact regular neighborhood activity in the surrounding areas. Accommodations made in the summer of 2014 included renovation of Bret Harte’s playground, parking lot, and drive aisle to re-route drop-off and pick-up traffic.  “Our general contractor will utilize industry best practices for safety in a dense urban environment throughout construction,” Cassel said.

Cassel said that they hope to begin construction later this year.