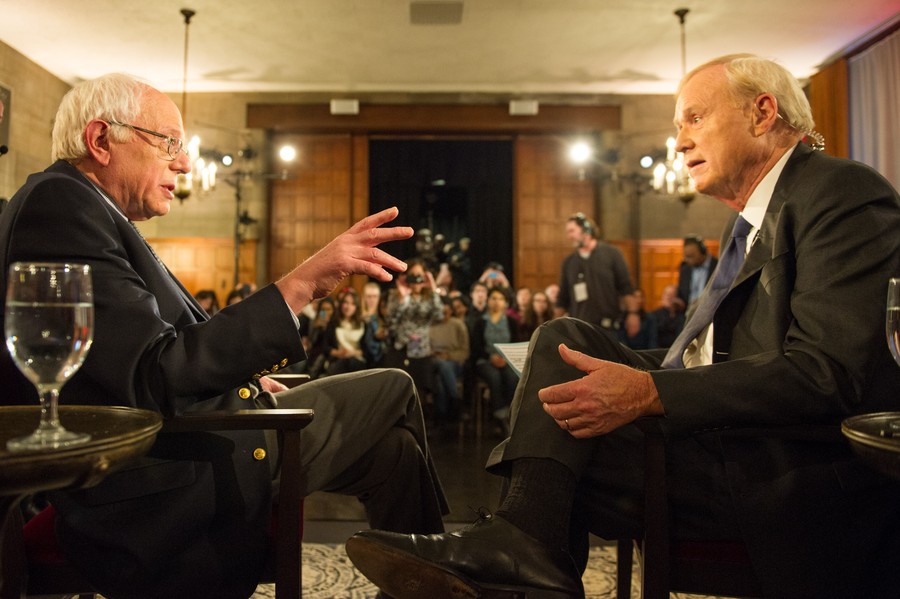 Democratic presidential candidate Bernie Sanders (A.B. ‘64) was interviewed by Chris Matthews for MSNBC’s Hardball College Tour on Thursday night at the Quadrangle Club. About 150 students attended the event, which was hosted by the Institute of Politics (IOP).

Matthews’ questions focused on the sticking points of Bernie Sanders’s campaign, including his strength in foreign policy, how the government would pay for the social programs that Sanders has suggested, and how he would reach minorities.

“Damn right I can do what I say,” Sanders said when Matthews questioned his ability to follow through on campaign promises.

“One of the reasons I’m running for president…is to transform American society, to take on a corrupt campaign finance system, a rigged economy and a broken criminal justice system,” Sanders said.

Matthews questioned Sanders about the responsibilities he would face as president. “Sitting in a situation room, calling in a lethal drone strike, can you see yourself in that position now?” he asked.

“Absolutely,” Sanders said. “I am proud of my achievement in terms of foreign policy.” He went on to discuss how he had voted against the Iraq war, and said he believes that was the correct decision.

Matthews also questioned Sanders on how he would show the world that he and the country were not to be “messed with.”

“I’m a very tough guy…I take on everybody. I am prepared to take on Putin and everybody else,” Sanders said. “You let them know that we have the strongest military in the world…and we are prepared to use that when necessary.”

However, Sanders pushed against the United States’ past actions in foreign countries. “I think that the kind of regime change that the United States has brought forth over many, many years…has been counterproductive,” Sanders said.

Matthews challenged Sanders on how he would fund his plans for increased Social Security benefits and free public universities. Sanders stated that to do so, he would tax Wall Street speculation.

Matthews then asked how Sanders would get the Senate to support such a tax or a plan. The candidate stated that if the people were mobilized on this issue, the Senate would have to pass the laws they wanted. “[Senators] are going to vote the right way when millions of people demand that they vote the right away,” he said.

Students from the audience also had the opportunity to ask questions of Sanders, including third-year Igolo Obi. Questions were screened beforehand by Hardball producers.

Obi asked Sanders about Hillary Clinton’s claim that she can break down barriers, especially for minorities, since many barriers for low-income individuals and people of color were instituted during Bill Clinton’s administration. “Do you feel that this claim about breaking down barriers is at least a little ironic, and how are you in a better position to do so?” she asked.

Fourth-year Chelsea Fine asked the final question on the show. “One thing that you haven’t discussed as much on the campaign trail was the fact that you’re Jewish. As a Jewish student, I would like to know, what is your relationship with your faith, and what would it mean to you to become the first Jewish president?” she asked.

“What comes to my mind so strongly is as a kid growing up in Brooklyn, and seeing people with numbers on their wrists…those were the people who came out of the concentration camps,” Sanders said. “That lesson I learned as a very young person was that politics is serious business. And when you have a lunatic like Hitler gaining power, 50 million people died in World War II. So I am very proud to be Jewish and I’m proud of my heritage.”

Before the show aired live at 7 p.m., Kate Grossman, the director of the IOP Fellows Program, interviewed IOP Fellow Joe Trippi about the state of the election and the road ahead.

When Sanders entered the room, members of UChicago’s Dirt Red Brass Band played a jazz rendition of “This Land is Your Land” by Woody Guthrie, a song Sanders has used before on the campaign trail. The band continued to play around commercial breaks and at the end of the show.

During a commercial break, Matthews asked the audience where people usually go if they don’t get into UChicago. “The second choice is Yale or Harvard,” Sanders said with a grin, to laughter.