The Country Doth Protest Too Much

As India’s youth rises up in protest, the government abandons its ideals in response. 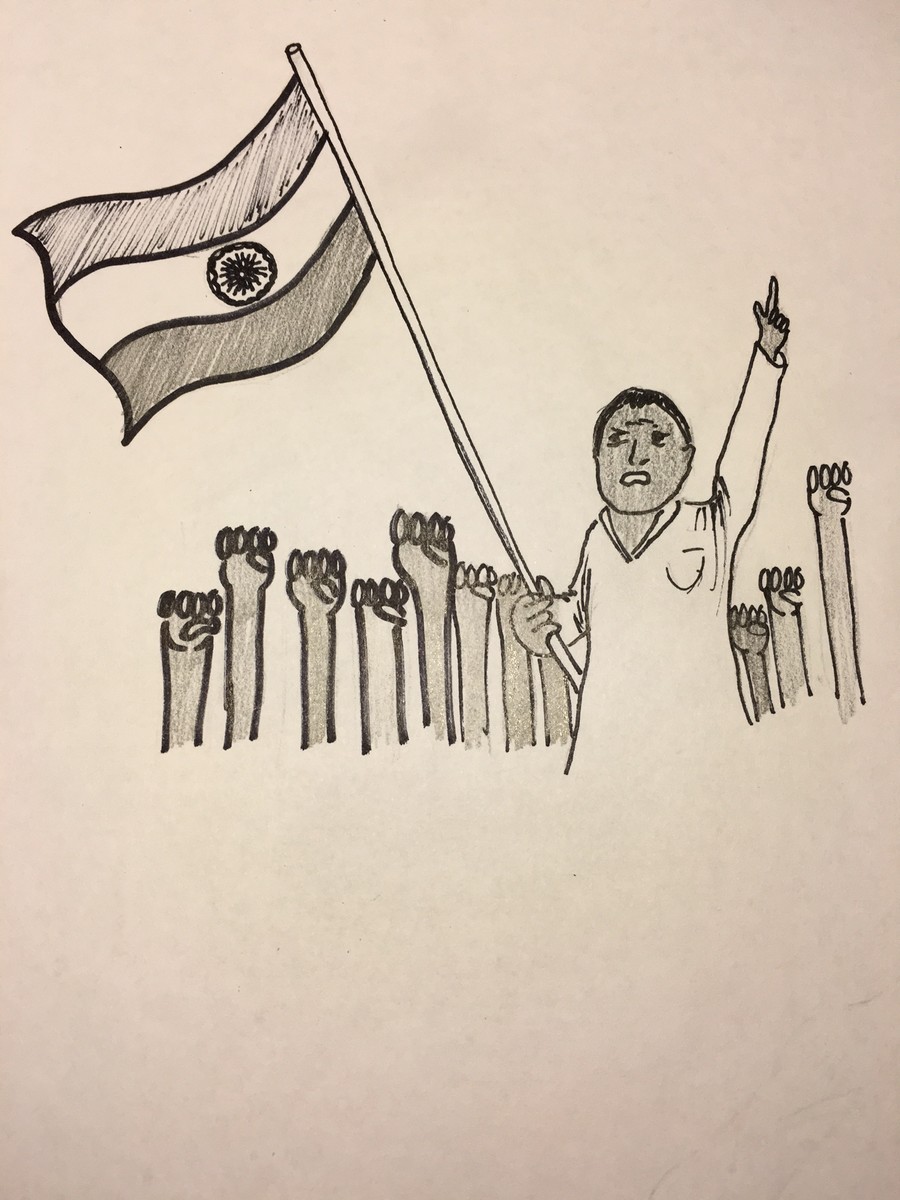 Over the last week, Delhi plunged into chaos. Even so far removed from home, the events at Jawaharlal Nehru University (JNU) have been impossible to miss. It’s creeped into conversation with other Indians, spread over social media like wildfire, and even appeared in the global consciousness as the world debates the importance of free speech. Anti-nationalism and sedition seem to have become everyday utterances in India, and arrests were made faster than you could say Kashmir. In the midst of this complex and nuanced issue, India’s government has a lot of explaining to do.

It all began when students of prestigious JNU organized an event to protest the “judicial killing of Afzal Guru and Maqbool Bhat” and to show solidarity with the Kashmiris’ struggle for self-determination. Afzal Guru was hanged in 2013 for terrorism and his supposed involvement in a 2001 attack on the Indian Parliament, but his case was shrouded in doubt. Many legal experts have cast aspersions on the fairness of his trial. He was executed in secrecy—even his family wasn’t informed, and they did not receive his body. Human rights groups the world over condemned the politically expedient move, protesting capital punishment and the ambiguities surrounding the trial.

The JNU protest was supposed to take place with the help of art, music, and poetry. However, Akhil Bharatiya Vidyarthi Parishad (ABVP), a youth faction of the extremist right-wing party Rashtriya Swayamsevak Sangh (RSS), affiliated with India’s governing party, Bharatiya Janta Party (BJP), demanded the expulsion of the organizers of the event. The university then launched a disciplinary enquiry against the students. Both parties follow a predominantly Hindutva policy that caters to and favors the Hindu majority, despite the fact that India is a secular nation.

The controversy really began when videos showing students chanting anti-national slogans emerged. The purported video apparently has pro-Pakistan slogans; nothing polarizes India like Pakistan and Kashmir. The event-organizing committee denied links to the anti-nationalism, and one of them told The Hindu, a major newspaper: “The programme was a cultural evening organized to question the working of the Supreme Court. It was also meant to bring the grievances of the Kashmiri citizens to light. The struggles of ‘self-determination’ must be openly spoken about. Considering this is a democratic republic, why should dissent be suppressed?”

The answer to that question is not very simple. The BJP seems to keep its flag flying on the strength of its patriotic fervor. Its recent actions have included banning beef in the state of Maharashtra to protect Hindu sentiments and banning a documentary on the incendiary Delhi rape case. There is a clear trend that is beginning to emerge—the BJP is scared of any challenges to the hyper-nationalistic rhetoric it has adopted to keep the almost 80-percent Hindu majority satisfied.

As the JNU incident progressed, the president of the JNU Student Union, Kanhaiya Kumar, was arrested on charges of sedition. There was no proof of his participation in the anti-national slogan-shouting, and the nation subsequently erupted in rightful outrage against the government, rallying support for JNU. The BJP has come out in condemnation of the JNU student activists, and Home Minister Rajnath Singh said, “If anyone raises anti-India slogans, tries to raise questions on the country’s unity and integrity, they will not be spared.” These are scarily fascist statements, given that Singh is supposed to be a democratic leader. Questions on a country’s integrity have no place in a democracy, according to Singh, and, if the BJP is to be believed, patriotic fundamentalism is its defining feature.

There was a police crackdown on the campus, and teachers, in revolt, have ironically taken to offering classes on nationalism. Supporters of Kumar as well as journalists were violently beaten. On his way to the courtroom, angry nationalists entered the trial court complex and ruthlessly beat him, even throwing stones at him—while the police simply looked on. There is something deeply disturbing about this; it is illegal to enter the court complex and yet no one was stopped. The police are complicit in their inaction; their brutality, though indirect, is rooted in irresponsibility and corruption. They have failed in their simplest duty: the provision of impenetrable, permanent protection.

Something is brewing in India. This January, the suicide of student and political activist Rohith Vemula shook the entire nation. He was a Dalit, historically the lowest and most abused caste in India—they were once called the “untouchables.” He died wishing that the world would see him as an individual, and not as a function of his social strata. In his beautiful, poignant suicide note, he said, “My birth is my fatal accident.” How many more people do we have to lose to realize our bigoted, reprehensible ways? Last September, Jadavpur University in Kolkata rallied to the cry of "hok kolorob,” or “make noise,” to protest the administration’s inaction when a woman was molested. In an astounding surge of democratic power, thousands of students showed solidarity. Students were thrashed and women molested by the police and goons (allegedly planted by the government) and yet the protests were relentless, leading to the arrest of the perpetrators. The current climate of anger has been festering for too long, and things have finally reached the tipping point.

The JNU protests have turned into something that is much bigger than simply self-determination for Kashmiris or just the capital punishment debate. It is slowly becoming a movement that is screaming in frustration—give us our voice. Give us the democracy we so proudly claim to have. Give us the equality our constitution promises us. Give us the growth and progress we display to the rest of the world as though it actually exists. Stop suppressing intellectual growth and critical thinking, productive debate and discussion. Stop delegitimizing our concerns. As P. Sainath, an eminent journalist, said, “stop criminalizing our dissent.”

This conversation deeply resonates within the global conscience—police brutality in America is gaining headlines, and free speech continues to be debated all over the world. The Right wants to uphold the current societal structure and suppress attempts to change it—it relies on this for its strength and for its votes. But the youth of India has made it clear that it will not be reduced to numbers. It will not watch in silence as its rights are brazenly and blatantly abused on a daily basis. The political climate in India is boiling over—and things need to change before our democracy evaporates altogether.

Urvi Kumbhat is a first-year double majoring in computer science and English.