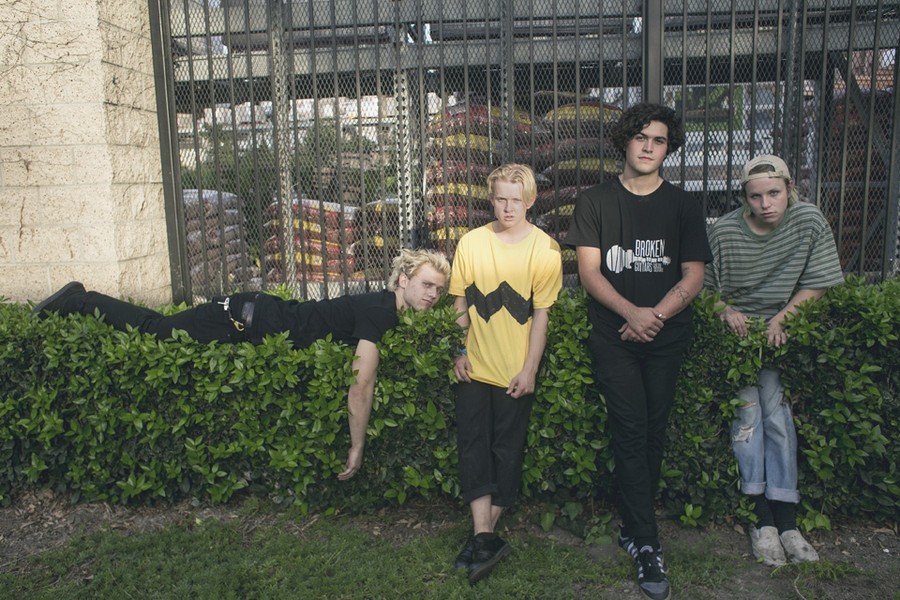 One day I was casually scrolling through my email, looking at various desperate press releases, when I had a reaction straight out of a publicist’s wet dream: I stopped in my tracks, plugged my ear-buds into my computer, and pressed play.

I didn’t actually read the text of the email; I just saw the picture. Four boys, one wearing an A’s bomber jacket, all holding cups of frozen yogurt in front of my favorite place in the whole world: Yogurt Park. Yogurt Park, for those whose lives have not been blessed, is a frozen yogurt shop in Berkeley, California—their creamy, chocolate fro-yo filled with gummy bears is the main motivator for me to return to the Bay Area during breaks. If this band liked Yogurt Park enough to advertise it in their press release, then I was willing to bet I liked this band.

And I was right. I did like SWMRS. The Yogurt Park press release was deliberate: SWMRS (Cole and Max Becker, Sebastian Mueller, and Joey Armstrong) want to re-establish the Bay Area as a prominent music scene. They’re doing that both individually (they self-released their debut album, Drive North, rather than work with a bigger label) and at a community level: they recently booked the legendary Bay Area DIY punk venue, 924 Gilman, and curated their own festival, Uncool Fest. All of this emphasis on the Bay Area fits into SWMRS’s broader goal, which is to stress the importance of individuality—just as you don’t need to be from L.A. to be a cool punk band, you don’t need to conform to societal norms to be a (hella) cool person.

I spoke to SWMRS’s Cole Becker over the phone.

Chicago Maroon: So, you were at Cal [UC Berkeley] for a while, right?

CM: What classes were you taking that shaped your worldview?

CB: I took a class on Foucault-ian power systems, and that really shaped the way I look at things, [especially] the way people interact and the way the world and society are structured. I [also] took an African American studies race and film class, and that was really amazing.

CM: Considering all these cool political classes you took, can you talk a little bit more about your decision to write songs that aren’t explicitly political?

CB: There’s a quote from bell hooks that always stuck with me: “All art is deeply political.” Whether or not you write political songs doesn’t mean what you do doesn’t have an immense impact on people, even at the level we operate at…. Our job is to make ourselves happy, and to make other people happy. If we can do that while making an inclusive and safe space for everyone to express their true identity, then I think we’re pushing the political goal we’ve always had in mind: to make music accessible for everyone.

CM: For me, Drive North doesn’t really scan as a straightforward punk record musically—there are a lot more studio effects that I expected. Was that [producer and FIDLAR front man] Zac Carper’s idea? Because I noticed that on Too, FIDLAR’s last LP, as well.

CB: It wasn’t his idea so much as we always wanted to do it, but didn’t really have the experience. A lot of the demos for the album I made with a drum machine, and so we had it in mind to incorporate this hip–hop influence. You’re from the Bay too. You know it’s impossible to avoid growing up with Mac Dre and Hieroglyphics, and so we really wanted to incorporate that into the production of our record. [Hip–hop is] just as much a part of our identity as punk is, and so when Zac told us he could help us get those kind of sounds, we were like, “Please, just, like, do whatever….” We gave him full reign over ProTools to make it happen.

CM: Most of the songs from your old band, Emily’s Army, don’t address feminism, but your Twitter account is very politically aware. When did you become woke to feminism, and was it through any medium in particular?

CB: It was actually because of [a friend]. She started a feminism club at [my] high school, and I was friends with her, so I started going. That was when I got interested in [feminism], and that kinda opened up [my] world to all of this other social awareness.

CM: Riot grrrl seems like an influence on your work: you name-check it directly in the Drive North song “Harry Dean”; “Uncool,” another song off the LP, is a Riot grrrl concept; and you have your own zine, titled Boyzine. What particular concepts or aspects of Riot grrrl do you apply to your work?

CB: I like the audacity of the Riot grrrl. I like that there was finally a space opened up for women, like Kathleen Hanna, to be unapologetically female and unapologetically true to their identity. I really respect that.

And again, we wanna make the world accessible to people no matter where they come from. It hurts to see people treated different ways based on different attributes of themselves, you know? It’s part of a debt that we feel that we have to the world: we’re all very privileged; we’re all heterosexual white dudes. We’re very aware of [that].

CM: I was just about to comment on that with regards to Boyzine. I think Boyzine is such a smart idea because you’re using feminism to reform the concept of masculinity, as opposed to trying to support the movement while still having all of the privilege.

CB: Yeah, exactly! Masculinity is such a strange dictatorial part of [how] our society functions.

CM: I know you’re just coming off your first record, but do you have any plans on how you’re going to evolve as a band? That’s something I’ve always wondered about for bands associated with the [L.A. label] Burger Records especially because they’re usually so teen-oriented. How do you age gracefully, lyrically, and musically?

CB: I think we’re lucky to have evolved separately from the Burger scene. We’re a Northern California band, so we don’t have the added pressure of being a niche Southern California band…. With the second album, I’d like to go completely stripped down, just focus on good songwriting and have it be live-recorded to tape.... Do a lot more pre-production and, like, fucking around with Ableton and Logic. Make some hip–hop beats…and feature some people! I’d really like to [collaborate] with Joey Bada$$.

CM: Speaking of hip–hop, how did your collaboration with [Bay Area rapper and director] Kreayshawn come about, and what about her interested you?

CB: We’ve always loved Kreayshawn. When our manager hit us up asking about directors for the music video [for “Figuring It Out”], he suggested a couple of people from LA. And that’s fine, but the whole concept of Drive North is that we’re bringing in our own Bay Area identity to this alternative rock ’n’ roll scene. They were cool, arty directors, but we really wanted to get someone 100 percent Bay Area to film it. Kreayshawn lives in L.A., but she’s one of the most Bay Area people I’ve ever met. When we met her it was awesome: we’d been down in L.A. for a week or so, and it was refreshing to hear someone who spoke the way all of our friends speak.... [She] said “hella” a lot. She’s got a very thick Bay Area dialect.

CM: Given that this whole record is about embracing where you’re from, and embracing the Bay Area for you guys specifically, do you see any irony saying you’re from Oakland when you actually grew up in Piedmont?

CB: That’s a really good question, I’m glad you asked that. I don’t see a lot of irony in it, ’cause all of our growing up was in Oakland and the East Bay.… Also, it’s just, like...Piedmont sucks so much, you know? We don’t represent the Vineyard Vines, Sperry Top-Sider portion of Oakland, and when we tell people we’re from Piedmont, that’s what they think. We tell people Oakland because we’re very much more culturally edified by Oakland than we are by Piedmont.

CM: Can I hear your Morrissey impression?

CB: [laughs] Um, yeah. “Puuuuuhnctured bicycleee on a hillsiiiiide desoooolateee/ Will nature make a maaan….” Hold on, I got everybody laughing, I can’t go on. How did you find out about my Morrissey impression?

CM: I saw it on Twitter. I’m expecting a Smiths live cover.