Migrating Through 40 Years of the MoCP

"The back wall of the main gallery stands up to 12 prints tall with a wingspan of nine shots—a ceaseless treadmill for the extraocular muscles." 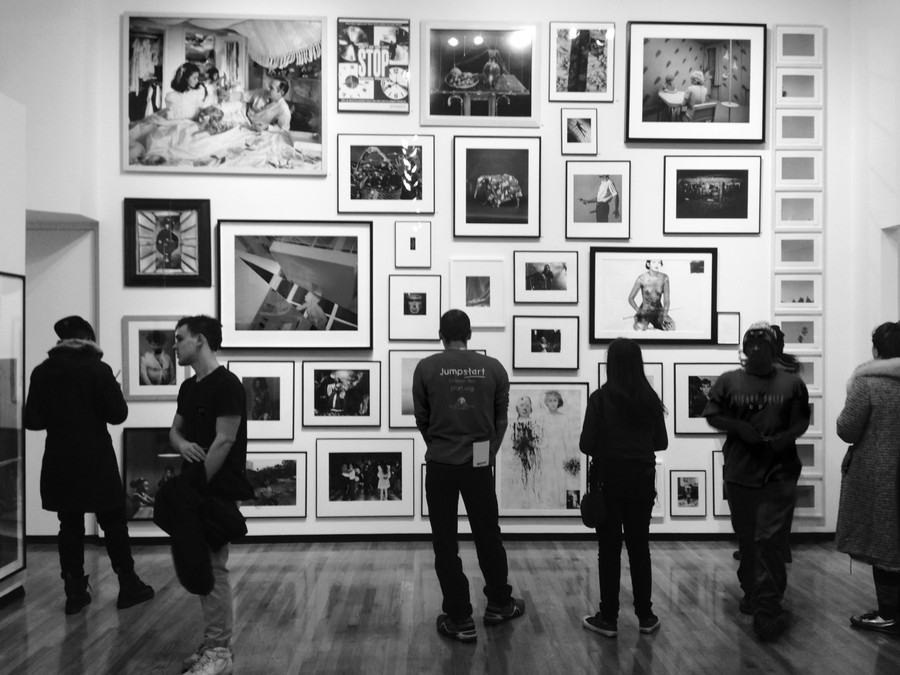 Visitors peruse the main floor of the Museum of Contemporary Photography’s latest exhibition, MoCP at 40, which debuted on January 25 and will run through April 10.

It’s iconic: that dust-weathered face gazing just out of frame. Florence Owens Thompson grips her cheek nervously as her children huddle close. You’ve seen it on posters, in movies—in every American history textbook ever printed. Today, Dorothea Lange’s Migrant Mother (1936) has become a gargantuan symbol of the Great Depression. But, in real life, it’s just an unassuming page-sized print lost in a sea of mattes.

Last week, the Museum of Contemporary Photography (MoCP) opened its newest exhibit MoCP at 40. The exhibit, which will remain on display until April, commemorates the museum’s 40th birthday with an overflowing selection of 155 of the MoCP’s 14,000 works. Photographs by Ansel Adams and Alfred Stieglitz sit alongside those of younger, lesser-known photographers like Michal Rovner and Shizuka Yokomizo. The onlooker begins his or her journey with an enlarged print of the display case containing the first photograph ever produced and concludes with a triptych of silver dye bleach prints. In this way, MoCP at 40 narrates the museum’s own history, the evolution of contemporary photography, and the variations within this movement.

Despite its prime location on South Michigan Avenue, the MoCP isn’t easy to find. Harbored deep within the inner ground-floor lobby of Columbia College, the exhibition space is surprisingly small and segmented, yet the curators take advantage of every inch of wall space. The back wall of the main gallery stands up to 12 prints tall with a wingspan of nine shots—a ceaseless treadmill for the extraocular muscles. Perusing the hall, you’ll spot a famous image every few steps, scattered among unfamiliar and intriguing compositions.

Controversial American photographer Sally Mann—best known for Candy Cigarette (1989), which features in the main gallery—also possesses her own section of wall space in a side gallery, complete with a glass display of newspaper clippings and reviews. Mann’s body of work centers on her children, capturing their oscillating angelic and primal impulses in stark black-and-white. German photographer Barbara Probst shows on the wall opposite Mann. In her project Exposures, Probst presents six aesthetically diverse photos of the same New York City block, all captured at the same precise moment. Tips of lenses and tripods are barely visible in each frame, tempting the viewer to piece together the initial layout of Probst’s stage.

While the density of artwork in these two galleries presents a wide and haphazard survey of contemporary art photography, the back left room provides a lesson in context. Forty years of exhibition publications, programs, and fliers line the walls. An exhibition card from a 1982 Andy Warhol show hides down low, tucked away a foot from the floor, while pamphlets from Robert Heinecken’s major retrospective and a Columbia College Faculty exhibition hang at eye level. More recent posters from collective show likes MoCP’s spring 2014 Home Truths: Photography and Motherhood and fall Phantoms in the Dirt don the edges of the room, demonstrating the maturation of posterage.

Though not every print was shot as a 4x5” negative on a Graflex camera in 1936, the works of MoCP at 40—iconic and undiscovered alike—all represent a small, haunting moment in the history of contemporary photography.