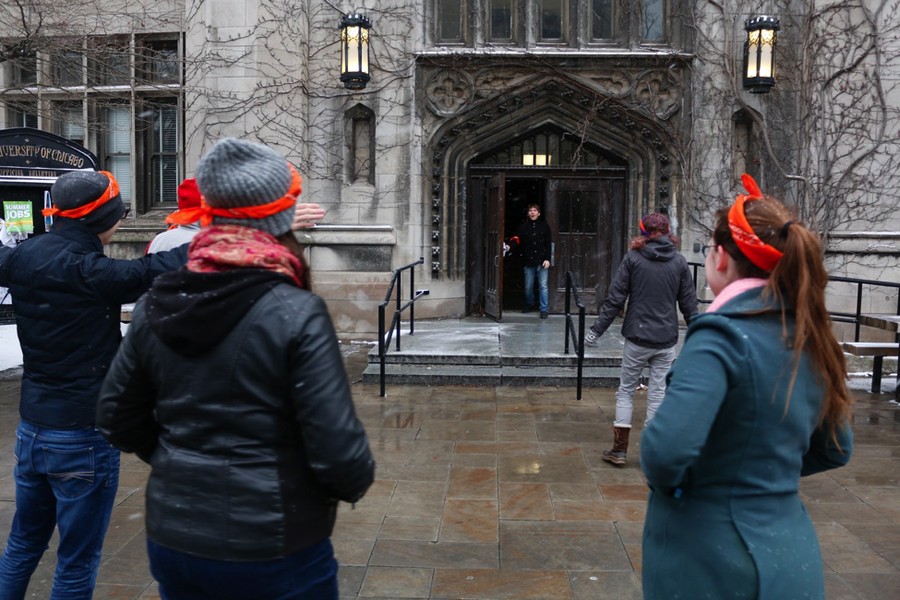 Chronis peaks out the door to see the waiting horde.

HvZ concluded with Extraction. Between 5:50 and 6:00, any remaining humans who could successfully enter a square of cones in Harper Quad surrounded by zombies officially survived the game. Humans who do not attempt Extraction are auto-killed at the end of the game.

A few humans who could not make Extraction decided to go out in style. Fourth-year Ian Chronis and Will Meyers invited the zombie horde to Cobb at 4:20. 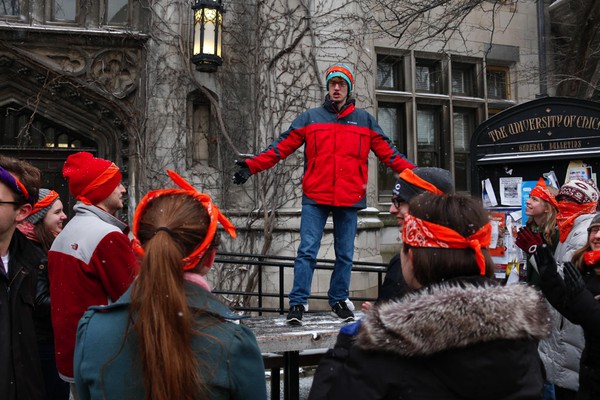 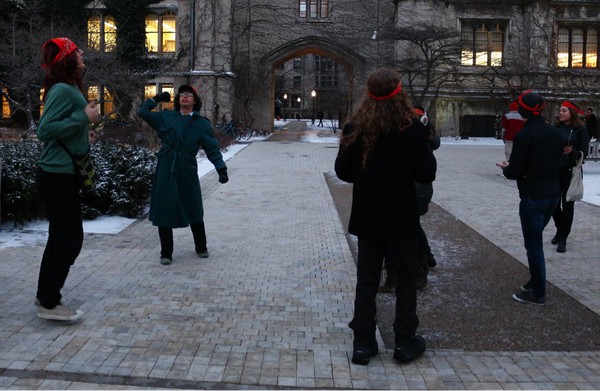 The zombies get psyched up. “Zero percent,” they chant.

As the minutes passed, the zombies grew antsy. Where were the humans?

Suddenly, the charge came from all sides. 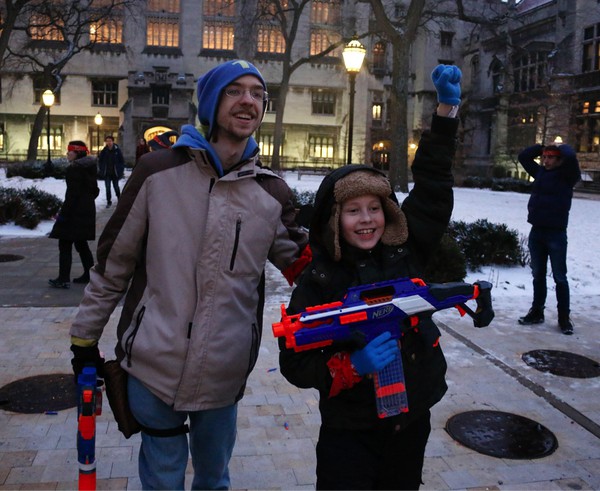 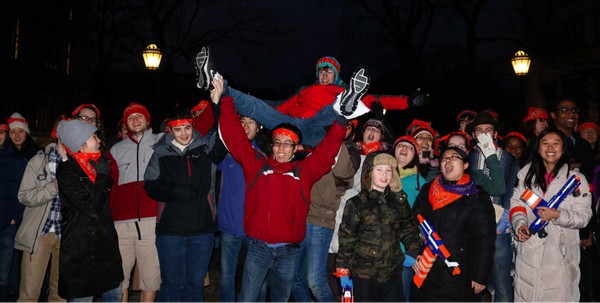 The zombies hoist the lead zombie Chris Eidsmoe into the air, celebrating.

Monday night mission brought together a small group of human survivors who had decided to brave the night’s mission. 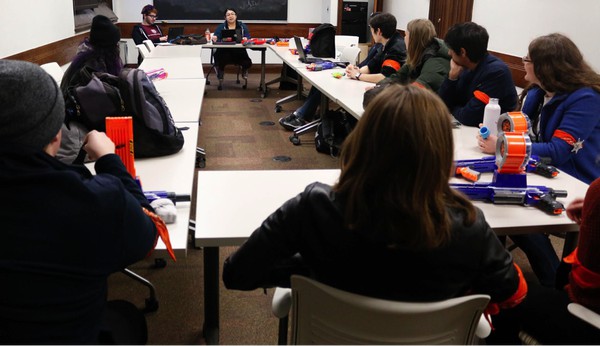 They were set a difficult task: with the aid of a wall of cones and two moderators acting as firing turrets, they had to defend Deputy Pete for twelve minutes against the zombies. 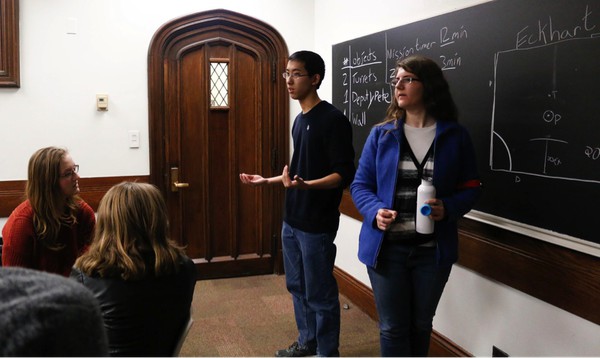 Humans plan out the placement of their turrets and wall.

“See you in Valhalla,” one human called out as they filed from the room.

The humans got into position, but the horde was larger than anyone expected.

The first wave left only a few humans standing. 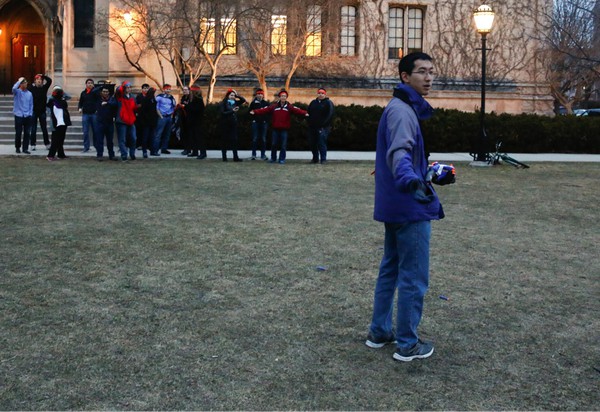 Peter Huang prepares to face half the zombie horde.

Easily taking down the remaining humans, the zombies savored a victory that came after two defeats on Thursday and Friday. 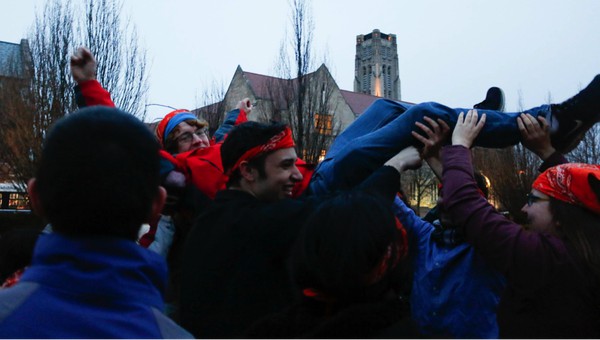 As the mission concluded, zombies sang “Brains, brains” to the tune of The Star-Spangled Banner.

The mods debriefed in Harper. HvZ Vice President Matthew Cartier said that they hadn’t expected the large turnout or the zombies’ decision to split their forces and come from two sides. “The humans who stayed for the second charge showed exceptional, perhaps over-exceptional bravery,” he said. He thought it would have been perfectly justifiable for the humans to flee, as two of them did.

Overall, he thought the mission had gone well. “After this the zeds will be enthusiastic and should have a big turnout at extraction. Zombie morale tomorrow is critical to make sure the extraction zone is well-defended.” Also, he noted that the humans weren’t exactly too upset at being killed. He thought most humans came “looking to go out in an explosive way” and will be happy to have “a crazy story about the time the mods accidently killed all of us.”

Second-year Isaiah Newman added that “any mission in which no players are actively unhappy is a successful one.”

“Now I can eat again,” one human remarked as he headed to Cathy Dining Hall.

“If something doesn’t have at least five layers of meta, I want nothing to do with it.”

Saturday marked the halfway point in HvZ, and more than half of the humans had been turned into zombies.

Throughout the day humans could to earn points through flag missions. At 5:00 a safe-zone was instituted on campus until 5:00 AM on Sunday morning. This safe-zone allowed both zombies and humans to attend a range of events Saturday night.

At 5:10 players gathered to celebrate the fallen in the annual “Pour One Out for the Homies” ceremony. Moderator and HvZ Vice President third-year Matthew Cartier read out the names of the dead. 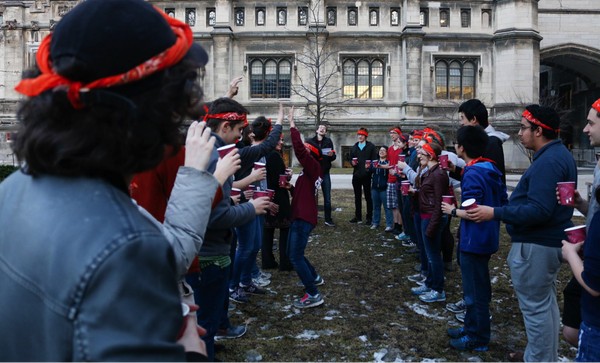 Members of “Secretly Not a Suicide Squad” high-five as Cartier makes a shout-out to Snell-Hitchcock’s self-infection strategy and zero-survival-rate.

Then the libations were poured. 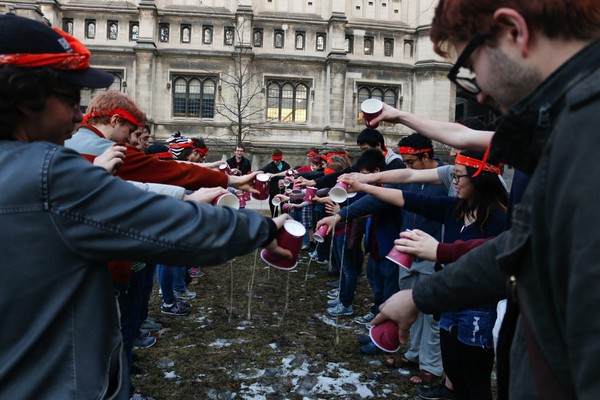 Players pour out libations to commemorate the fallen.

Before he was a moderator, Cartier held an informal version of “Pour One Out for the Homies”, where players said their own names and then fired a salute. Once he became a moderator, he was able to make the ceremony official and honor everyone. “This is definitely my favorite thing,” he said.

After the ceremony concluded, the moderators arranged a Wild West style duel. Players were forced to abandon their usual guns for antique Maverick guns. The moderators dug into storage to find the oldest and clunkiest nerf guns—the Mavericks were what they came up with. 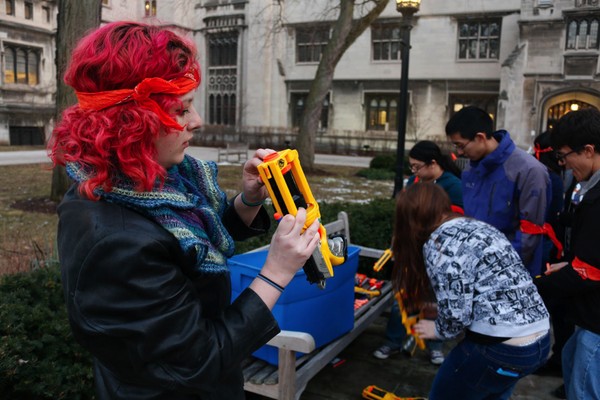 Players went back to back, walked away from each other, turned, and fired. The initial ten-pace distance proved too long for the Maverick guns, so the moderators shortened the distance until it was down to one-pace and a half. Those who were hit went to the sidelines, and the survivors lined up again. 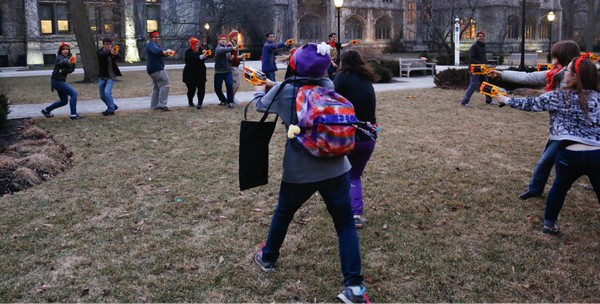 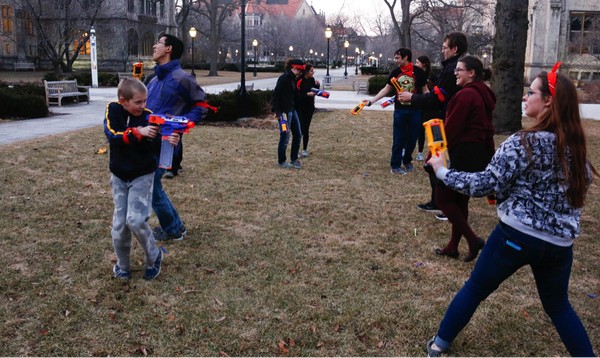 The field is whittled down. 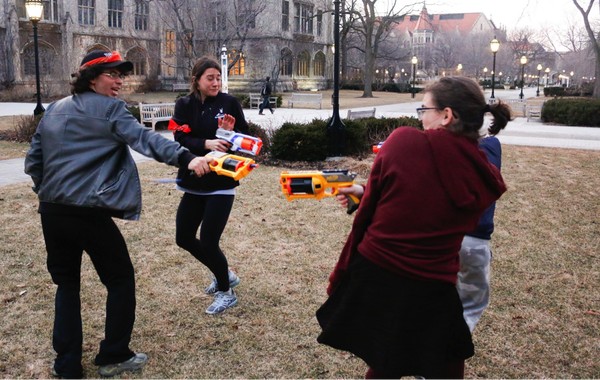 The finalists face off.

After the duel concluded, players broke into small groups, chatting as they enjoyed the safe-zone’s reprieve. Determined to see just how dysfunctional the Mavericks were, fourth-year Stella Biderman gathered some people to play Russian Roulette with the Mavericks. 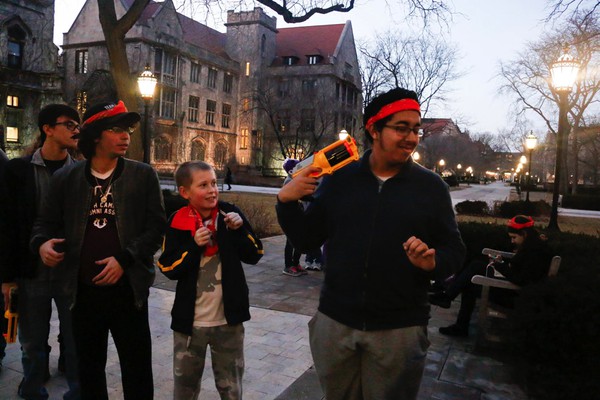 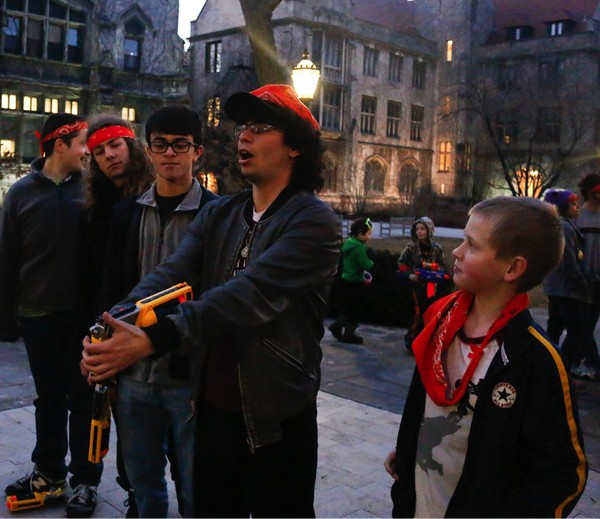 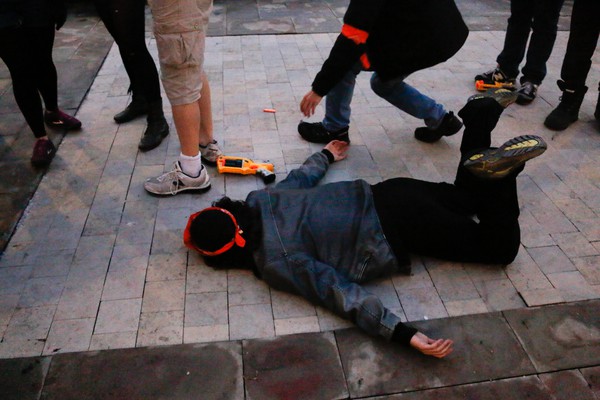 At 6:15, zombies and humans met in Cox Lounge for a Truce Dinner. The safe-zone continued until 5:00 AM Sunday morning.

As of Saturday night, 121 out of 193 players are zombies. For more statistics, see https://www.uchicagohvz.org/game/6/