"The proper response to ideas we do not like is not censorship, it’s not disruption, it’s not preventing those ideas from being expressed." 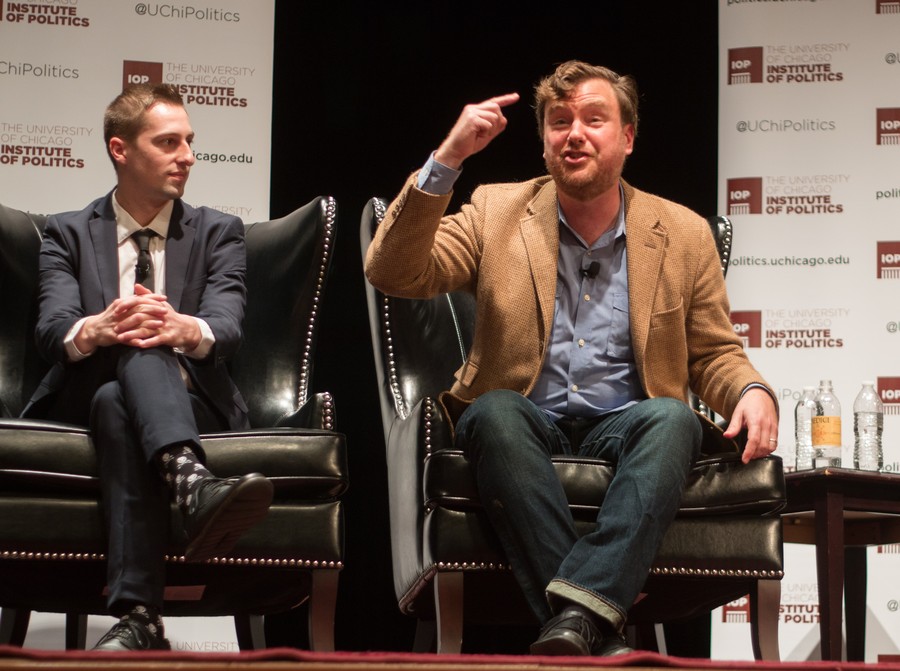 Greg Lukianoff, president and CEO of the Foundation for Individual Rights in Education (FIRE), makes a point while Aaron Hanlon, a Colby College English Professor, looks on.

Free speech on campus was up for debate last Wednesday, just a few weeks after heated interruptions of speakers reignited concerns about the issue at the University.

IOP Executive Director Steve Edwards, who had tried to calm the Alvarez protest a few weeks before, introduced the talk as a discussion of campus free speech in general as opposed to a response to specific events on campus. Recent events, however, were clearly in the air, and several audience members touched on them when the panel took questions.

The anti‐restriction position on freedom of speech was represented by law school professor Geoffrey Stone, who led the committee that wrote the University’s Statement on Freedom of Expression, and by Greg Lukianoff, president and CEO of the Foundation for Individual Rights in Education (FIRE).

Colby College English professor Aaron Hanlon and Atlantic writer Adrienne Green rounded out the panel. George Washington Law School professor Catherine Ross, who moderated the event, opened the discussion portion of the event by noting the First Amendment does not legally bind private universities. As calls to limit speech on campus are spreading, she said, schools must decide for themselves where they should stand.

Ross prompted Stone to summarize the statement he helped draft. “[A university] must not interfere with the freedom to express ideas, however loathsome or upsetting those ideas might be. The proper response to ideas we do not like is not censorship, it’s not disruption, it’s not preventing those ideas from being expressed. It’s responding to those ideas on the merits,” Stone said.

Lukianoff then presented his view of the national scene. For most of the time he has spent working for campus free speech, his opponents were administrators trying to restrain the rights of students. More recently, by his account, students have begun to call for restrictions on freedom of speech.

“That’s really upsetting to me. I’m not used to being in a position of disagreeing with students, because I’ve spent most of my life defending students. So we’re in this funny position, where we’re defending students’ rights to protest—we’re even defending their right to demand speech codes—but also saying at the same time, ‘by the way, you can’t pass those,’” Lukianoff said.

Green has written in the Atlantic that asking minorities to endure uncomfortable or offensive conversations for the sake of free speech tacitly helps damage their mental health. She returned to this argument at Wednesday’s event.

“In the position that colleges and universities take that hands-off approach—‘you guys duke it out with each other’—I can imagine that it’s a hard position to be in when someone is saying something sexist or racist or derogatory about your religion. And that is something where you have to defend your personhood, not your opinion, not your thoughts, not your disagreement,” Green said.