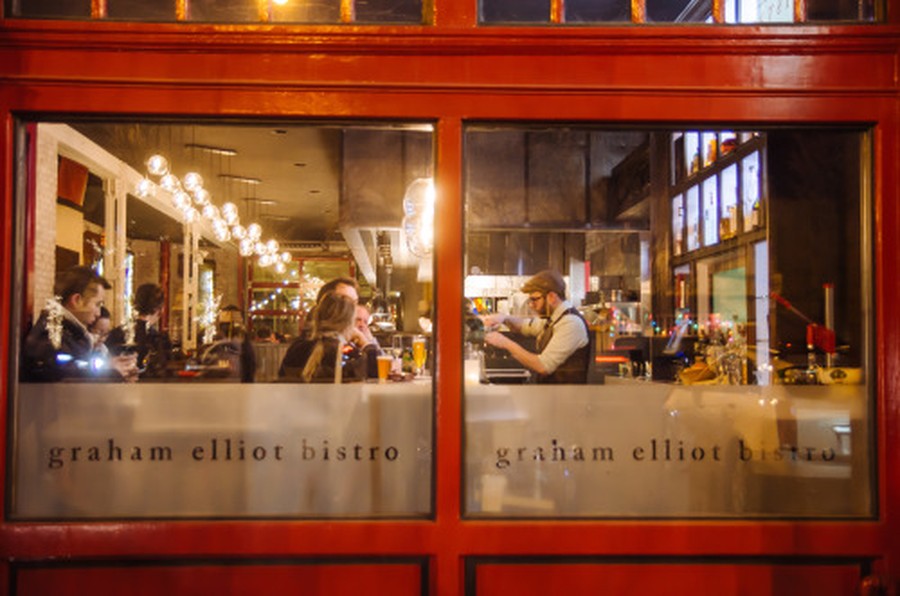 The exterior of Graham Elliot Bistro in West Loop.

There is no shortage of restaurants along Randolph Street in the West Loop. Whether you are looking for the ideal artisanal beer and burger pairing or an upscale dinner spot with antique mirrors and glimmering chandeliers, the row of restaurants in the old industrial neighborhood runs the gamut. Nestled between a marble façade with overflowing flower baskets and an empty windowfront is the Graham Elliot Bistro.

The outside is painted a vibrant cherry red and the whole building looks like an old fire station. Inside, the small but cozy restaurant hums with activity. The hostess immediately offers to take our coats before leading us past the open kitchen to our table. We try not to elbow the couple sitting next to us as we slide into our seats. The exposed brick walls, shiny white support beams, and exposed light fixtures are all part of the tasteful atmosphere. The diners range from young professionals out on a Saturday night, to a middle-aged couple having a date night, to an older group catching up with friends from out of town.

Graham Elliot is most famous for his role as a judge on MasterChef. In 2008, he opened his eponymous restaurant—one of only 15 in the country to be awarded two Michelin stars. The West Loop Bistro, opened in 2012 and recently renovated, is a more low-key affair, pairing innovative takes on American classics in an accessible way. The menu is divided into “firsts” (mostly cold appetizers), “seconds” (mostly warm smaller dishes), “thirds” (meat and fish entrees), and “sides.” We decided to skip a heavy entrée and load up on the smaller dishes for more variety.

First up was a “deconstructed Caesar salad” and “milk and honey.”  The Caesar salad arrived in three neatly aligned hills, scooped out like ice cream and topped with anchovies. Despite the frothy appearance and curious texture, the salad was a bit disappointing, tasting like an ordinary salad passed through a blender and then chilled. The star, however, was the accompanying crouton. A fine-dining take on a Twinkie, the soft chewy brioche, lightly fried and crispy on the outside and stuffed with smooth mascarpone cream, melted in my mouth. It quickly disappeared, and we fought over who would get the last bite. The milk and honey was a quivering egg of fresh burrata mozzarella, buried in a nest of baby arugula, and dotted with raw honeycombs. The soft cheese and crunchy greens provide fresh contrast while the richness of the honey perfectly complements the crisp yet creamy flavors.

On the advice of the couple sitting next to us, we went for a steak tartare, cheddar risotto, and Elliot’s famous popcorn. The tartare was chewy and moist, a kick of horseradish giving it a delicious tingle at the end. The risotto, however, was a letdown. Symbolic of Elliot’s spin on classic dishes, it features Wisconsin cheddar, smoked bacon, PBR soaked onions and shredded apples. Here, the interplay of flavors and textures was overwhelming and unsatisfying. The risotto itself was runny, with the other ingredients sinking to the bottom. The heavy cheddar and bacon chunks were almost too rich and didn’t play well with the sour undertones of beer and apple crisps. We made a few more stabs at the risotto and then proceeded to munch on the popcorn, dressed up with truffle Parmesan. Slightly chewy and almost nutty tasting, the popcorn was messy (there is a small mountain of finely grated cheese doused on top) but perfect for idle nibbling.

The staff is particularly friendly and attentive. Upon learning that we were big Graham Elliot fans, our waitress was quick to let us know that he was in the restaurant that evening and discreetly helped us get a photo with the man himself. Dressed in chef’s whites, he was in and out of the kitchen, peering over the cook’s shoulders and greeting diners. At the end of the meal, we were presented with a card to fill out with feedback.

The verdict? The lively crowd, attentive service, and creative food make the Bistro a great spot for a fun date night or birthday dinner outside of Hyde Park.