U of C Divest is acting in response to the “Boycott, Divestment, and Sanctions” movement. 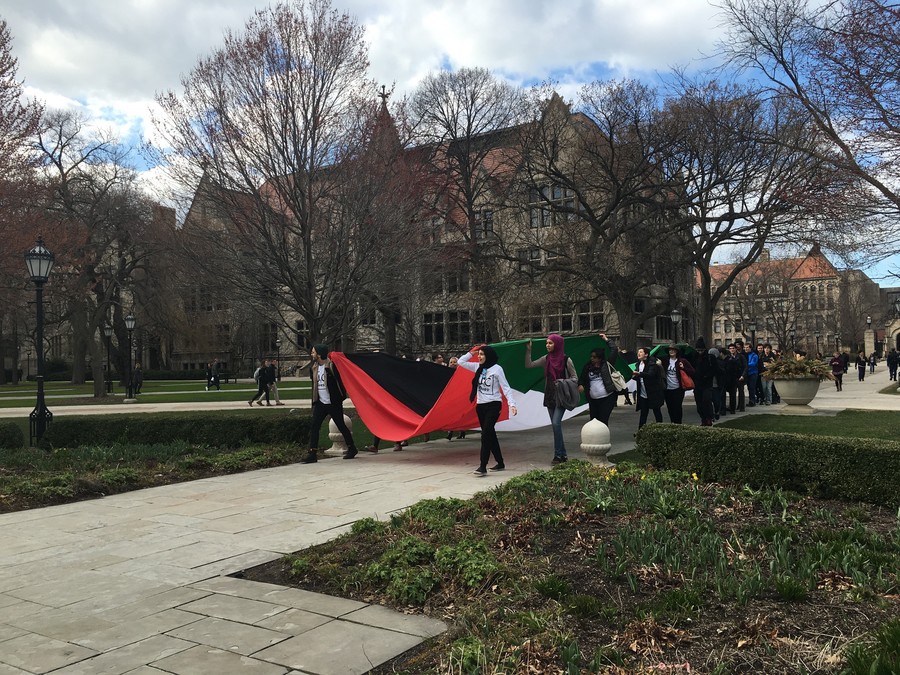 Students march through the quad on March 28, kicking off a rally pushing for the divestment of Israel.

A new coalition is urging College Council (CC) to vote on a resolution that calls for the University to cut financial ties with 10 companies that are “complicit in, or profiting off of” the Israeli occupation of Palestinian territories, it said in a press release on Monday.

The coalition, U of C Divest, said in the press release that the coalition is acting in “direct response” to the “Boycott, Divestment, and Sanctions” (BDS) movement against Israel for its treatment of Palestinians. The coalition added that it supports BDS’s calls on Israel to end occupation, to dismantle the Israeli West Bank barrier, to grant Arab-Palestinian citizens of Israel “full equality,” and to promote the rights of Palestinian refugees to return to their homes and properties.

“We are going to bring [CC] a proposal, present our resolution to them. They can ask us questions sometime within the coming weeks, and then probably the next week or sometime shortly after that they’ll have a vote on it,” said fourth-year Sara Rubinstein, who is a leader of the coalition and a member of Jewish Voice for Peace.

Although the coalition is not affiliated with any student organizations on campus, it is an “initiative” of Students for Justice in Palestine (SJP), according to the coalition’s website. First-year Afreen Ahmed said in an e-mail on behalf of SJP that the student group “endorses the values set forth by the U of C Divest campaign.”

“These companies perpetuate apartheid and human rights abuses by providing technology and resources used by the Israeli military and government to attack and kill Palestinian civilians, maintain and build the Apartheid Wall and checkpoints, and destroy Palestinian property for the purpose of building illegal settlements,” the coalition said in the press release.

The coalition does not know how much money, if any, the University has invested in the companies, according to the resolution. As a private institution, the University does not make its investments public.

Even if CC were to pass the coalition’s resolution, it cannot mandate that the University change its investment strategy. Rubinstein said that the council can press the University to reallocate its assets by passing non-binding resolutions, and chair of CC Eric Holmberg said in an e-mail that CC has passed such resolutions in the past.

“There was nothing on the [CC] agenda this Tuesday regarding the U of C Divest resolution. Any [CC] representatives can place items on the agenda, but no one has done so for next week’s meeting yet,” he said Thursday.

On Thursday, a group with the mission of countering the divestment resolution, UChicago Coalition for Peace, announced itself on Facebook. Fourth-year representative Maxine Berman wrote in an e-mail that the coalition is a reformulation of the Israel Engagement Association, a pro-Israel group.

“The coalition’s position is that the divestment resolution is harmful and counterproductive to efforts to achieve a two-state solution, which is the stated policy of the Palestinian Authority, the U.S. government, the United Nations, and the Israeli government,” she said.

“Divestment would leave us feeling marginalized by our peers and it would prevent productive dialogue between the two sides that could lead to a lasting peace,” reads the coalition’s announcement post on Facebook. “A BDS resolution is counterproductive to the two state solution and drives the parties further away from necessary compromise while simultaneously radicalizing both sides of the spectrum.”

At 4:30 p.m. on Monday, U of C Divest held a rally on the main quads attended by approximately 60 students. The students carried a 70-foot Palestinian flag, provided by the U.S. Palestinian Community Network (USPCN), from the north side of the quad to Levi Hall. Outside Levi, the University’s main administration building, rally attendees held the flag as several students took turns speaking about divestment over a megaphone.

The coalition hung banners around campus on Monday, reading “End Apartheid,” “Free Palestine,” and “Divest Now.” Another banner presents itself as a mock report card for the University. It reads “South Africa: F” and “Darfur: F.” The University did not divest from companies conducting business in South Africa during apartheid or from corporations affiliated with Sudan amid violence in Darfur. The banner ends: “Time for our makeup test #UofCDivest.”

In defense of its opposition to calls for divestment, the University has repeatedly cited the 1967 Kalven Report, which recommended that the University act politically neutral in order to promote freedom of expression. University spokesperson Marielle Sainvilus cited the report in an e-mail to The Maroon in response to questions about U of C Divest.

“Over more than a century, through a great deal of vigorous debate, the University developed a consensus against taking social or political stances on issues outside its core mission. Doing this through investments or other means would only diminish the University’s distinctive contribution—providing a home for faculty and students to espouse and challenge the widest range of social practices and beliefs,” Sainvilus said.

SJP said that the University’s inaction on this issue is not neutrality, but rather complicity in “illegal occupation.” “The University’s investment in corporations that profit from Israel’s illegal occupation is a political statement in itself: it subjugates and undermines students who believe that Palestinians deserve to live free from a military occupation that enforces apartheid and violates human rights,” Ahmed said on behalf of SJP in an e-mail.

“The University’s investment team performs thorough due diligence to ensure that the entities in which it invests and their managers have no history of illegal behavior and have a strong track record of meeting the professional norms of their business,” Sainvilus said in an e-mail.

Adam Biesman, a second-year who watched the rally, said in an e-mail that the resolution would suppress one side of the conflict: “Divestment excludes people like me from campus conversation about the Israeli-Palestinian conflict. U of C Divest places total blame in a delicate and nuanced situation squarely on Israel, seeking to do so on behalf of the entire student body.”

Director of the UChicago branch of the Chabad Jewish Center Rabbi Yossi Brackman wrote in an e-mail that he is worried about “escalation” at UChicago given that the introductions of pro–BDS agendas to college campuses have, in some cases, sparked intimidation and violence.

“The students pushing this pro–BDS agenda know full well that the University will not divest from companies that do business with Israel, and indeed there is no reason it should. Rather, they want to delegitimize the only thriving democracy in the Middle East, create discomfort, and alienate those that speak out in support of Israel,” Brackman said.

Member of USPCN’s National Coordinating Committee Muhammad Sankari said in an e-mail that USPCN is supporting U of C Divest “because [it] won’t tolerate multi-national corporations that are complicit in Israel’s atrocities against the Palestinian people.”

“U of C historically has a horrible social justice record, and we want the students there to know that they are part of the broader Chicago progressive community and the broader Palestine support community, and that we will work together with them for however long it takes to win divestment and Palestinian national rights,” he added.

On Wednesday, U of C Divest hosted a night of “radical art and truth-telling” at the Logan Center. On April 5, it is holding an event called the “The Jewish Case for Divestment” at 8 p.m. in McCormick Lounge, and on April 7 it will host a “discussion on queer politics in Palestine/Israel” in Stuart 104 at 6 p.m.

At least nine student government bodies at universities across the U.S. have passed non-binding resolutions calling on their respective colleges to divest to some extent from Israel, although the institutions have generally not acted on the resolutions. The list of schools includes seven in the University of California system, as well as Stanford University and Loyola University in Chicago.