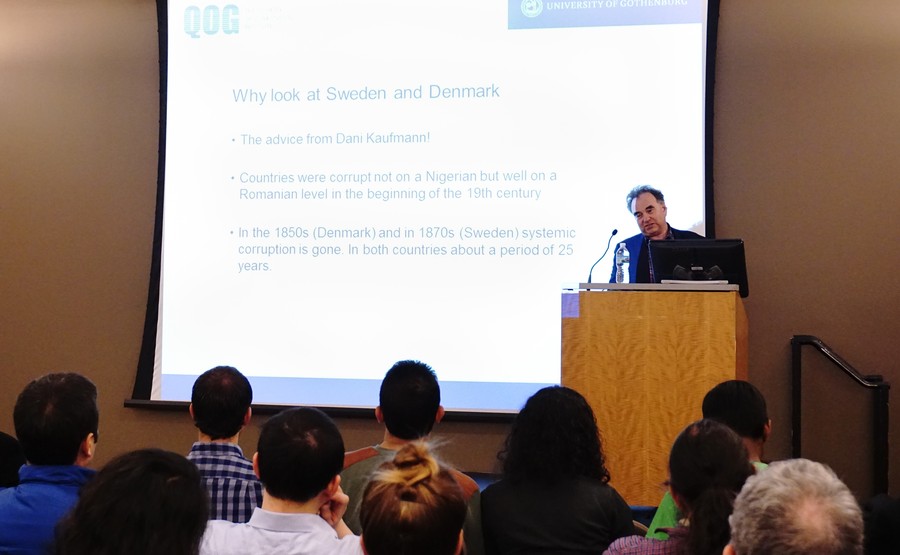 On Monday evening, political scientist Bo Rothstein delivered a lecture on government corruption, outlining the path that Scandinavian governments—considered among the world’s most transparent—have taken to establish non-corrupt institutions.

Rothstein rejected the “principal agent” theory that has long dominated anti-corruption efforts. The theory asserts that corruption can be eliminated by offering political actors an incentive greater than the benefits derived from corruption. Such an actor cannot exist, argued Rothstein, because political leaders naturally derive their power from charisma and popularity rather than purely financial sources.

Instead, Rothstein adheres to a “collective action” theory that assumes political actors are driven not by utility-maximizing self-interest but by reciprocity. “People are willing to do the right thing only if something can convince them most other agents are willing to do the right thing,” he said. “It makes very little sense to be the only one to pay your taxes if you think that very few other agents are paying their taxes.”

If the “collective action” theory is correct, argued Rothstein, policymakers must approach corruption through a different lens. Instead of tinkering with incentives, as is often pursued, “the stimulus for change must be so strong that not only the agent [is persuaded to change], but must also think that agents who are also in [his] position must be willing to change.”

With the U.S. in the midst of a presidential campaign that has cast a spotlight on issues of honesty and questioned the integrity of the so-called “establishment,” Rothstein’s lecture offered a look into how political scientists and policymakers contend with corruption. Rothstein also stated that while the U.S. has experienced a significant number of political scandals, unlikable policies are often misidentified as corruption.

Democracy, however, should not be associated with non-corruption. Rothstein noted the tendency for voters to re-elect corrupt politicians. To further highlight this difference, he cited the examples of Singapore and South Africa. Singapore, whose government is one of the world’s least corrupt, is far less democratic than South Africa, whose government operates with high levels of institutional corruption.

Rothstein noted the lack of research on corruption. This does not mean the issue is insignificant, he emphasized. “Today, if one were to investigate the root of human suffering in the world, one would find it has most to do with the majority of the world’s population living under corrupt and dysfunctional institutions,” Rothstein said.