Hallowed Be Thy Name: Iron Maiden Slaughters the United Center 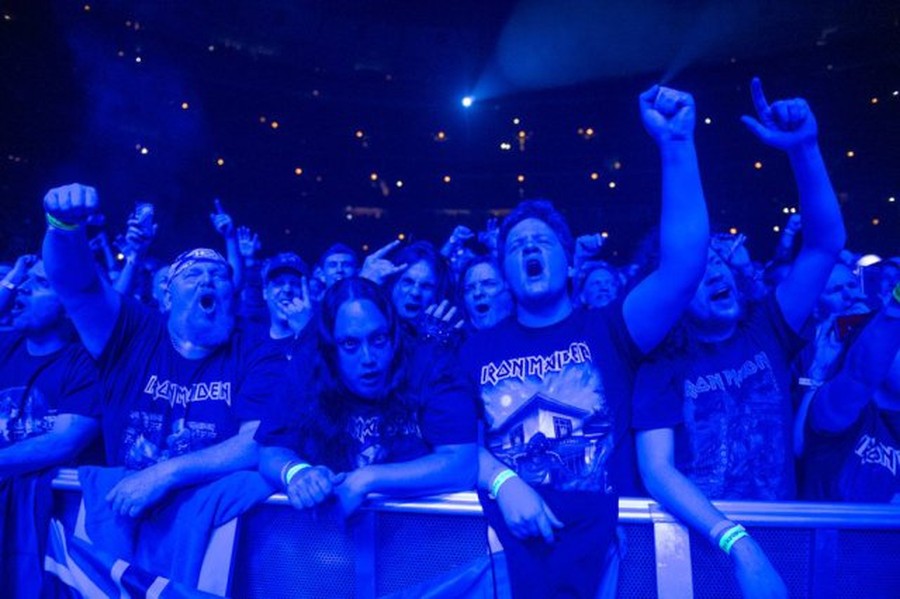 Iron Maiden fans rock out to the legendary metal band at the United Center.

It’s difficult to understate the magnitude of Iron Maiden. The band is one of a few heavy metal bands that has united critics and the masses; it has also maintained its popularity late into its career without undermining its credibility. Too many groups have overstayed their welcome, yet no one has ever tired of Iron Maiden. Its music is eternal and ageless: albums like The Number of the Beast and Powerslave are considered classics, and its shows attract fans of all generations, from hardcore metalheads to mainstream listeners. Iron Maiden has had a profound effect on the metal genre. The group has affected not only the way people listen and perform, but also the fan culture in general.

Last year’s The Book of Souls was Iron Maiden’s best record since Brave New World in 2000, boasting its biggest, brashest, and arguably most epic compositions to date. Its stage show reflects the hefty scale of The Book of Souls. Renowned for its sets, Iron Maiden transformed the United Center into a Mayan temple, complete with its mascot Eddie popping out in colorful garb during “The Book of Souls.”

But it’s not as if Iron Maiden needed just theatrics. It’s rare that a band over four decades old can deliver solid performances as if its members were still in their 20s. Then again, Iron Maiden isn’t just any other band; its songs demand to be performed live, as the orchestrations yearn to be played in a stadium venue for maximal dynamics. And Iron Maiden’s instrument-wielding members are more than able to deliver the task. Guitarists Adrian Smith, Dave Murray, and Janick Gers provide triple-layered riffing and soloing that adds the magnetism to Iron Maiden’s awe. Drummer Nicko McBrain has always delivered one of the strongest and most consistent metronomic backbones in the music world and his prowess was on ample display. Steve Harris’s galloping bass-playing is the most essential part to Iron Maiden’s instrumental mix, providing a rapid pulse for fans to headbang to.

Though all the names mentioned above provide the band with its color, what makes Iron Maiden a powerhouse live is frontman Bruce Dickinson, whose raw charisma and soaring vocals grant the band’s stage shows their legendary status. Despite Dickinson’s recent bout with throat cancer, he sounded as good as ever, once again upholding his nickname—“The Air Raid Siren.” 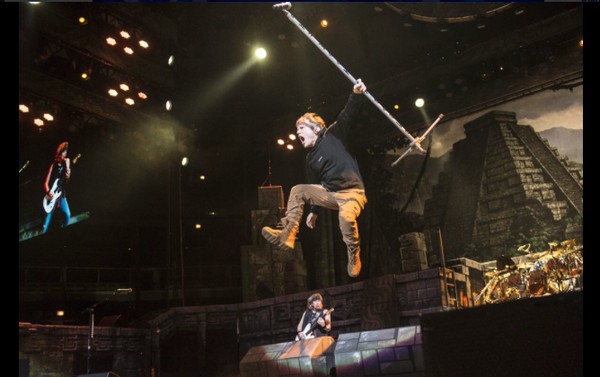 Frontman Bruce Dickinson is still kickin' after winning his battle against throat cancer.

For the two hours on stage, Dickinson bounced around and hit just about every note perfectly, changing into British soldier garb for “The Trooper” and Mexican wrestling gear for “The Red and the Black.”

Unfortunately, some of Maiden’s best songs didn’t make the cut, including “Aces High,” “Wrathchild,” and even “Run to the Hills.” I could have skipped Iron Maiden playing “Death or Glory” to hear any of those numbers, as well as a multitude of the band’s other material from its ’80s golden period.

Notwithstanding that quibble, Iron Maiden delivered for each and every song. The crowd cheered for the opening chimes of “Hallowed Be Thy Name,” the buoyant riffing of “The Trooper,” and, of course, the immortal opening to “The Number of the Beast,” punctuated by Dickinson’s trademark blood-curdling scream.

It speaks for the audience’s zeal to demonstrate how strong of a community Iron Maiden’s fan base is. Before closing with “Wasted Years,” Dickinson noted the eclectic number of flags held up by audience members from around the world, who’d come all the way from Mexico to Sweden, united by a love of the band. Iron Maiden’s global appeal is perhaps why it has remained such a vigorous force for all of these decades—at the United Center, Iron Maiden demonstrated that it never disappoints its fans.