The set-up was simple, with a piano in the corner and seven music stands for the characters... 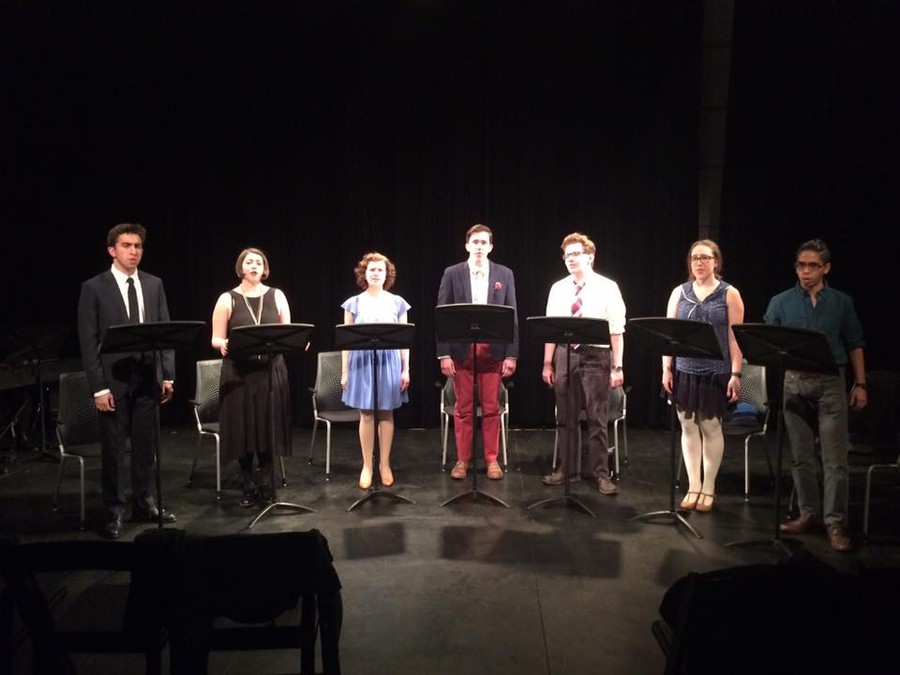 In F. Scott Fitzgerald’s The Great Gatsby, Jay Gatsby throws dazzling parties in the hopes that Daisy Buchanan, the woman he loves, will someday show up to his mansion. Jordan Baker, Daisy’s friend, loves the large parties. “They’re so intimate,” she says. “At small parties there isn’t any privacy.” But there was all the fun of a great party in the small, intimate space of Logan 501 last Saturday night, where GATSBY: The Musical was performed as part of UT/TAPS New Work Week.

Those expecting an elaborate musical would have been taken aback at the minimalist decor of the performance space. The set-up was simple, with a piano in the corner and seven music stands for the characters, but any doubts about the performance’s ability to keep the audience engaged were dispelled once the actors took the stage. For just over an hour, there was song, dialogue and—in a memorable scene where Jordan Baker (Dani Wieder) pulls a bemused Nick Carraway (Jacob Goodman) out from behind the stands—even dancing.

Although the cast only had 10 days to rehearse, the musical itself has been in the works for three years. Fourth-year Laurie Beckoff first had the idea to write a musical based on her favorite American novel as a first-year. She had just seen Baz Luhrmann’s film adaptation and choreographed UT’s production of The Drowsy Chaperone, also set in the Jazz Age.

While Beckoff enjoyed aspects of Luhrmann’s adaptation, she was disappointed by his musical choices. “It was the anachronistic music that really motivated me to take advantage of the rich 1920s musical theater tradition,” she said.

It’s no surprise, then, that Beckoff was drawn to the idea of writing a musical. “I’ve grown up surrounded by musical theater—seeing, listening to, and performing in musicals,” she said, commenting that the setting and plot of Gatsby made it fit the form well. “I worked on the lyrics on and off throughout college and decided I should finish a full script before graduating.”

“For some of the music, we used jazzy vocals patterns combined with Laurie’s basic song ideas,” Strahan said about the songwriting process. The sound and chord structure of one particular song was based on the song “Mr. Cladwell” from Urinetown, a show that Barnard, Beckoff, and Strahan worked on together in the fall. However, as Strahan said, “We added our own twist to how it’s sung to make it sound jazzier and more ’20s.”

Unsurprisingly, the musical numbers were the highlights of the evening. Classic lines from the novel, such as Gatsby’s thoughts on being able to repeat the past—“of course you can”— and Nick’s view that “reserving judgments is a matter of infinite hope,” were woven into the lyrics.

One of the best examples of the collaborative composing was the number “Tell Him,” which featured Gatsby (Quinn Kane), Tom Buchanan (Adam Johnson), and Daisy (Elisabeth Del Toro) singing out the scene in which Gatsby wants Daisy to leave her husband, who in turn challenges Gatsby to “tell her of the kind of life you live.” But it was the last line of the musical that struck home, as all seven characters harmonized to sing the words, “into the past.”

Though poignant, the musical was also undeniably funny. “I think Laurie had hoped it would be a bit more serious,” Barnard said, “but since it’s a book that most people are familiar with, I think pieces of the adaptation were funny because they were so true to the book.”

The crowd laughed during many songs, as well as nearly every time Gatsby delivered his famous catchphrase, “old sport.” This humor was achieved effortlessly. The whole musical told the story simply: none of the extravagant parties were acted out, there was no drawn-out car crash scene, and Gatsby and Wilson’s deaths were simply represented by the two actors sitting down after the sound of two gunshots.

While criticisms are usually directed at performers’ vocal abilities and choreography, it seems unfit to apply such judgments to GATSBY: The Musical, which succeeded in the minimalistic way in which it was performed. Instead of showcasing flashing lights or dancing flappers, the performance demonstrated something more important: the creative efforts and hard work that a team of people put into adapting a novel that clearly means a lot to them. The result was a well-told, humorous, and thoroughly enjoyable rendition of a work that will remain a beloved American classic.