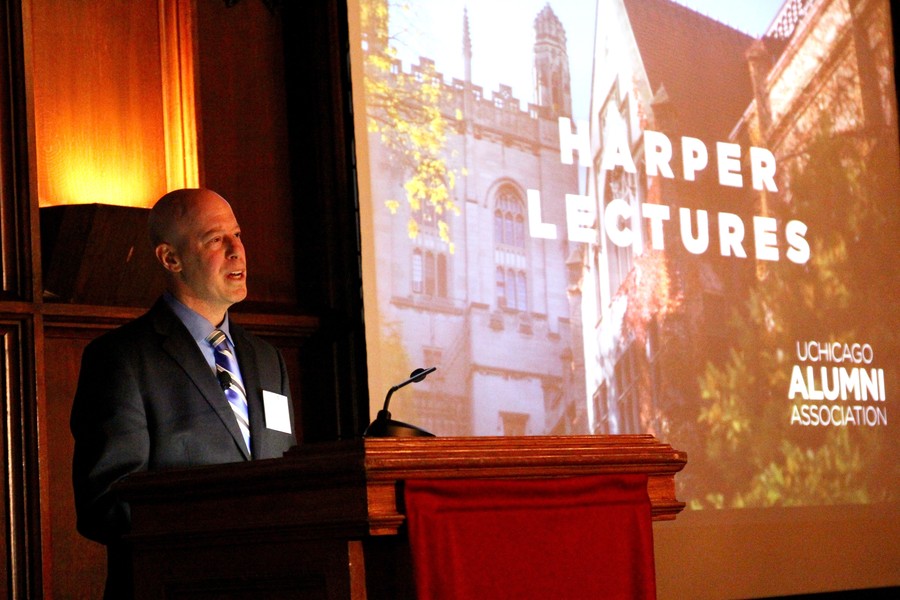 On Thursday evening, Craig Futterman, clinical professor of law at the Law School, delivered a lecture at the University Club downtown about his research investigating the relationship between young black people and the police on the South Side of Chicago.

The research project, co-authored by Chaclyn Hunt and Jamie Kalven of the Invisible Institute, is entitled “They Have All the Power”: Youth/Police Encounters on Chicago’s South Side. The paper, after which the talk was named, was presented at the Chicago Public Law and Legal Theory workshop at the University’s Law School this March.

Futterman prefaced his talk by clarifying that his goal was not simply to state that problems between young black people and the police exist.

“I’ll be talking a lot about race, police, and youth. And thankfully this won’t simply be an opportunity to identify these issues, but one that tries to identify things [we can do about them],” Futterman said.

From these interviews, Futterman and his co-authors identified four main issues regarding the interactions between young black people on the South Side and the police. The first issue they identified was that the police treat black people differently than white people.

“First thing to jump out at us was that there was a different constitution that governed these kids than the constitution we teach our students in the classroom at the University.… Everything about these encounters from the officers’ gait or their swagger as they approached, to their tone of voice appears from the kid’s perspectives to be meant to convey messages of authority, to inspire fear. Young black folks expect to be treated with suspicion of being a criminal by the police.”

Futterman contrasted the experiences of these students with those who go to high school at the University of Chicago’s Laboratory Schools and noticed a stark difference in the way in which they viewed the police.

“[W]e interviewed over a hundred students at the Lab School…it’s situated just five blocks from [Hyde Park Academy]. In a room of a hundred students, each of whom were the same age as the ones you spoke with, not a single kid…reported ever having been stopped by the police,” Futterman said.

The second issue his team identified was that there seemed to be “unchecked power” regarding the way the police interacted with the students.

One of the issues with this unchecked power was that CPD officers have been rarely held accountable for their acts of abuse, Futterman said. He noted that although the students described many positive interactions between themselves and CPD officers, the fact that abusive officers are protected by their departments makes them distrustful of the force as a whole.

“When a kid sees those officers abuse their friends and neighbors without any fear of punishment; that says a lot more to them about what the department is than the neighborhood officer who greets them with a smile. Indeed it actually makes that smile feel like a lie.… It didn’t matter that the data says if 90 percent or more of the officers in their neighborhood aren’t contributing to this mess. If everyone protects the abusive officers, they become the face of the department, indeed the face of civic authority to our kids,” he said.

The last issue Futterman identified regarding the interactions between the students and the police was the way in which the stop-and-frisk policy employed by police officers caused the students to view themselves. An officer is only allowed to randomly stop and search someone if they have reasonable suspicion that the individual in question has been, is, or is about to engage in criminal activity. And once someone has been stopped, only if the officer has reasonable suspicion to believe that the individual in question is dangerous or has a weapon, can the officer frisk.

“So even when we stop a child, we’re telling that child that we think he or she looks like a dangerous criminal. And our work taught me how deeply our kids are affected by that. There’s damage to our self-esteem, their beautiful place in the world. As [one student interviewed] told us, ‘they make you feel like less than a person, less than a human being,’” Futterman said.

The last issue Futterman identified was a fundamental distrust between the students he interviewed and CPD officers. This distrust culminates in the refusal to call the police for help, even when it is needed.

“We start to observe that the neighborhoods of Chicago that had the very most complaints of police abuse were the same areas that had the lowest clearance rates for violent crime. This is just what the kids taught us: The police were least successful solving crime, solving violent crime, in the areas where they had the least trust,” he said.

After detailing four main issues that govern the interactions between the young black students he interviewed and the police, Futterman moved on to discuss potential solutions all centered on notions of “honesty” and transparency between the police and the public.

This comes in the wake of the tape that he and Jamie Kalven worked towards getting released last November which shows 17-year-old Laquan McDonald being fatally shot by Chicago Police Officer Jason Van Dyke. The tape was released by the City of Chicago only after Futterman and Kalven, alerted by a tip, submitted 16 requests for its release.

To ensure a sustained effort towards honesty and transparency, Futterman, Fifth Ward Alderman Leslie Hairston, and Northwestern University Clinical Associate Professor of Law Sheila Bedi have advocated for the dissolution of the Independent Police Review Authority (IPRA), to be replaced by community oversight boards. According to Futterman, an ordinance was proposed to the Chicago legislature on Wednesday, April 13 that if passed, would do just that.

Futterman ended his talk by reflecting on a line from the 1991 film Boyz n the Hood.

“[Actor and rapper Ice Cube’s character] Dough Boy said, ‘Either they don’t know or they don’t show what’s going on in the hood.’ Meaning either we don’t know or we don’t care about what’s going on in the hood. Something happened after the release of the video of the killing of a 17-year-old black child. It occurred to me, we know, we know. And we also know what we need to do. Young black folks like the kids [from Hyde Park Academy], they’ve led us to this moment and they’ve challenged us to care. It’s up to us to act on this,” Futterman said.