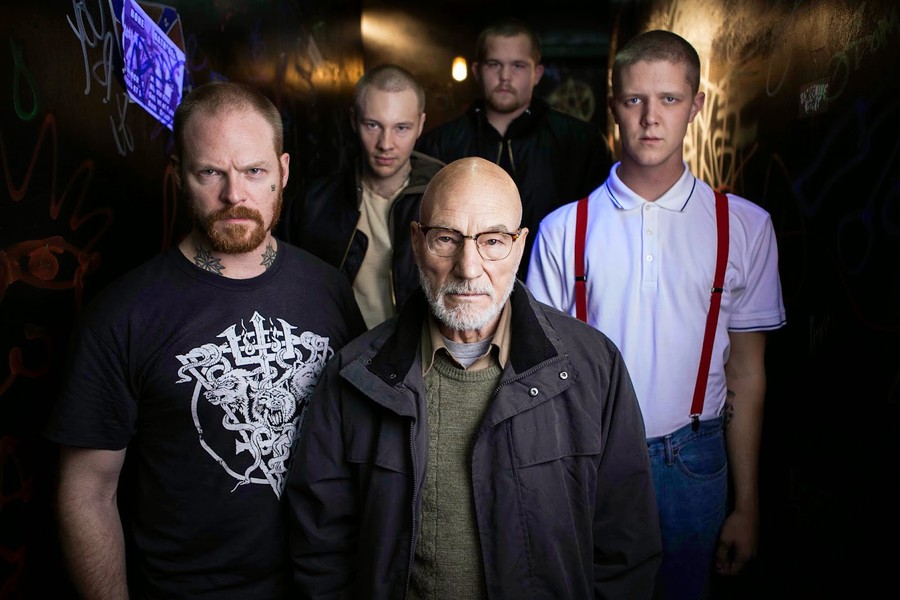 As the legend goes, director William Friedkin realized that The Exorcist would be a hit when he saw an audience member run out of a screening, vomit, and immediately run back into the theater. Go to a hardcore punk show today (or an Iggy Pop show in the ’70s) and you’ll see performers bleed, puke, and destroy their bodies in order to give the audience a good time. Combine the two and you get Green Room, a punk rock thriller from Jeremy Saulnier that transforms some of the grossest images you’ll see this year into an exhilarating achievement in exploitation.

Saulnier, himself a veteran of the ’90s punk scene, sets up a simple problem, but one that pays rich dividends over the course of the film. The Ain’t Rights are a D.C. hardcore band that actively rejects popularity, forgoing a social media presence and telling a college radio DJ that its music should be hard for fans to find. (Unsurprisingly, its tour isn’t going too well). After making six bucks a person performing at a Mexican restaurant, the band plays a gig at a rural Oregon skinhead bar patronized by punks with swastika tattoos and decorated with white pride stickers and Confederate flags. But when one of the band members witnesses a gruesome murder after a set, the band gets detained by neo-Nazis in the titular green room. As the situation deteriorates, it becomes clear that the Ain’t Rights won’t get back to Washington without a fight.

The neo-Nazis and their icy, calculating leader (Patrick Stewart) don’t foresee any trouble in knocking off the band by staging an accident. They soon find out, however, that the green room is just as much a fortress as it is a cell. Aided by the murdered girl’s shell-shocked friend (Imogen Poots) and whatever skills they’ve picked up from their hard-living punk lifestyle, the members of the band have to punch, cut, and shoot their way back to their van.

Virtually every terrible thing that can happen to a human body does. The squickiest moments—involving a box-cutter and duct tape—come early on, but machetes, shotguns, and a pair of vicious attack dogs all get chances to draw copious amounts of blood each time the band sallies out of the green room.

Saulnier effectively uses the natural colors of his setting for atmosphere. The relatively safe green room is a warm incandescent yellow, while the black-lit and ice-blue lighting of the bar area gives it an appropriate haunted-house vibe. The thick Oregon woods that surround the bar are lush, like an oasis just out of reach for both the band and the audience. Saulnier also keeps the framing tight and the focus narrow. When the camera is watching the band plan its next move, the viewer gets the impression that there’s always something important just out of the frame (which there usually is, to disastrous results).

Not everything in Green Room works quite as well. The film struggles with establishing its expansive cast of characters in a tight running time, and the same goes for communicating the Nazis’ constantly shifting tactics. Poots and Stewart, both English, struggle with accents: Poots sometimes veers into an Appalachian drawl, and Stewart’s master-thespian voice never stops sounding out of place.

Still, these are minor complaints against a movie that nails both stomach-churning horror and get-up-and-applaud catharsis. By applying a hardcore punk formula to film, Green Room shows how something dark and violent can end up bringing you somewhere transcendent.

On April 6, The Chicago Maroon sat down with director Jeremy Saulnier to discuss Green Room.

Chicago Maroon: I noticed you had a really interesting use of color in your film. How did you approach that when you were directing?

Jeremy Saulnier: For Green Room especially, it certainly tends towards the green, but it’s also because we were in Oregon. It’s a lush place, with the forests around, a lot of army jackets. It just happened to be a lot of green. But I do prefer certain color palettes, and in this one the research and the environment we built dictated how our color palette was approached. Many movies preserve red for a certain impact, and that’s just kind of a standard thing—for good reason. If you’re having a movie with graphic violence or makeup, blood is red. Blood is important. It should stand on its own.

That was another challenge, the design of [the bar]. Certain hate group symbolism would be present here in the environment but you put one too many flags or insignias in the background and it becomes a kind of goofy, Hollywood version. So it was very much about designing the world and letting it be native to its own environment and then shooting it with a certain amount of craft. And contrast, because when we were inside that green room, it really had to stand very different than the lush environment outside.

CM: Did you think about how you wanted to present this punk scene or the punk lifestyle in a positive or balanced way?

JS: On the road with the Ain’t Rights, before they hit this concert venue in the middle of nowhere—that [was] based on my experiences and my friend’s experiences, having been in the punk and hardcore scene in the ’90s. So I did re-interview a bunch of my friends. I hadn’t been to a metal show in a long time, so I went to one when I was writing. Just observed it, got some fun detail, throwaway dialogue, asked my buddies what their desert island bands were…. Basically, I just want to be true to my experience. It is about a love. You show up for a reason.

If you’re in a punk band, you’re likely not turning down record labels left and right. You’re likely playing somewhat pathetic shows but giving your all regardless. The Mexican restaurant show in Green Room was like a show that I played personally. I remember I tried my damnedest, but I was very much aware of how sad it looked if you were outside the restaurant looking through the window. People are getting their takeout food and there’s like three kids with backpacks just staring at you. I wanted to archive that experience. Because it’s kind of pathetic from one perspective but it’s kind of beautiful, looking back.

You weren’t there for accolades, you weren’t there for money, you were there for the experience. And the theme is that you gotta show up. Even when we go to the concert venue, and we end up dealing with Nazi skinheads, and that’s a dark part of the scene. But for a moment there, I wanted to show the transcendent experience when there is synergy [between] collective, pure, beautiful energy from the band onstage and the hostile crowd—just because of the music. That’s the only time I’ve ever used slow motion in a movie in my life, to highlight the allure of this aggressive music. And it can bring all sorts of people together. I’ve never seen a more diverse amount of subcultures within a subculture than the hardcore scene. In D.C., we had Nazis, Hare Krishnas, vegans, guys from Boston, all kinds of shit. It was nuts, and I was just there, watching.

CM: This feels like a much bigger movie than Blue Ruin [Saulnier’s previous film], much more complex. Were there any difficulties or things that you were used to doing that you couldn’t do when you scale up?

JS: The scaling up was important, because I had to turn whatever I had into a sustainable career, which is very difficult doing independent films. We had about 10 times the budget from Blue Ruin, but it’s the same problems. You’re part of a sustainable network of people and there’s a prospect to make this a career. But you’re still fighting for time, for schedule, for budget. It scales up, but all you want is more time to do your work.

We actually had the exact same number of shooting days as Blue Ruin, but we had trained professionals. We had lots more experience, and that was fun. I was asking a lot for this movie: the pit bulls, the stunts, the very detailed and intense action sequences. But they’re relatively small scale—we’re not doing big [pyrotechnics] or blowing up spaceships. Taking the time to do such tightly choreographed work is no joke.

Some days we’d do an indie schedule where we’d shoot 10 pages in a day. Other days, you’d do half a page in a day. I was scared of the pit bulls and the stunts, [but] they ended up being the easiest department. The hardest part was keeping this film alive and the story energetic in the confines of a single room for over an hour. That was fun. I should have studied more Hitchcock.

CM: How much of the Nazi group was based on research versus your imagination?

JS: Mostly research. Nazi skinheads were at most of the shows I went to in D.C. back in the ’90s. Didn’t spend a lot of time hanging out with them; they’re very different, very separate. They wear uniforms. There was a lot of violence back then. Nothing fatal that I ever saw, [but] a lot of brawls. But I remember that culture because they were part of the punk culture. When I was researching Green Room, I researched these organizations to get a sense of their vernacular, customs, and traditions, which varied from group to group. They’re prone to be associated with militancy, firearms, criminal activity, so it seems they’re perfectly primed to be “bad guys.” Not because of their ideology, because of their structure. So once I felt I could actually have the characters speak amongst themselves with the authority I needed, I didn’t get too far into the ideology, the culture. There are no big speeches about why they think the way think; it’s really about procedure and customs.