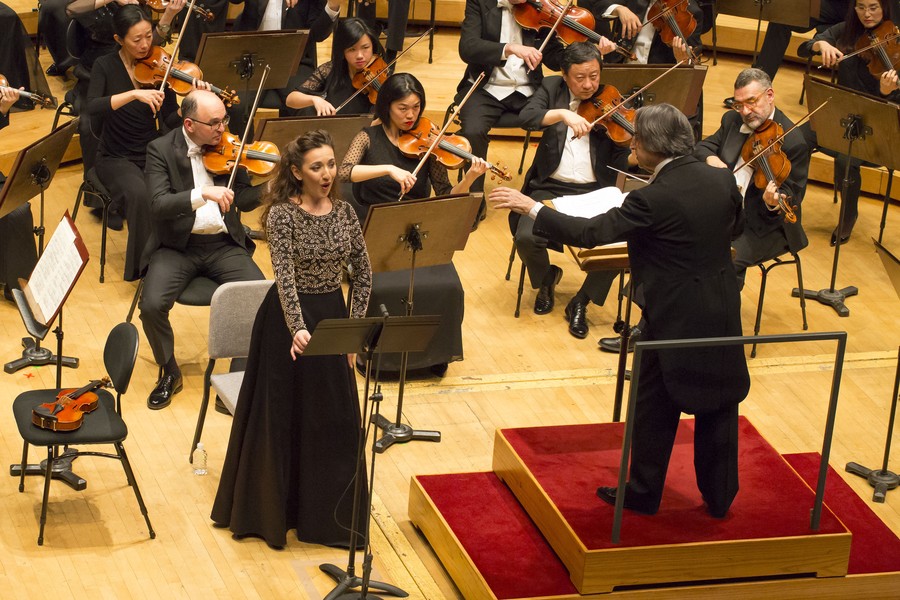 Soprano Rosa Feola joins the CSO in the final movement of Mahler’s Symphony No. 4.

The Bard is back—and, until the end of the month, so is the beloved music director of the Chicago Symphony Orchestra (CSO).

After withdrawing from his mid-February residency due to a sudden injury and last-minute hip surgery, Riccardo Muti has returned to the helm of the CSO for his penultimate season residency, leading a batch of Shakespeare-centric performances as part of the city’s yearlong Shakespeare 400 Celebration. Last week’s festivities included Berlioz’s massive symphonie dramatique, Roméo et Juliette, with a concert version of Verdi’s Falstaff on tap for next week.

Friday’s program included two Shakespeare-inspired symphonic fantasies by Tchaikovsky: his underrated The Tempest and its more famous cousin, Romeo and Juliet. The pieces were a prelude to Mahler’s Symphony No. 4, which is a similarly overshadowed but precious gem in the composer’s symphonic output.

Tchaikovsky’s palindromic Tempest begins and ends with a churning invocation of the sea, signaled by soaring horns and flurried strings. The titular storm was truly fearsome upon the broad, sonorous shoulders of the CSO’s mighty brass, and under the fingers of the CSO’s caramel strings, one wondered anew why Miranda and Ferdinand’s love theme isn’t heard as often as Romeo and Juliet’s.

Romeo and Juliet was the program’s certain crowd-pleaser and didn’t disappoint in that respect. The famous love-theme was exquisitely shaped and the clashing interludes explosive. Muti’s disciplined direction did well to avoid soupy melodramatics, presenting a cohesive, compelling whole.

Mahler’s Fourth Symphony is also inspired by a text, albeit not one by Shakespeare: he drew inspiration from Des Knaben Wunderhorn, an anthology of German folk poems. The specific poem that birthed the Fourth, “Das himmlische Leben” (“The Heavenly Life”), depicts a child’s view of heaven; the symphony is structured around themes of life, death, and innocent bliss. The text of the poem appears in the fourth movement, performed by a soprano soloist.

The Fourth is often called Mahler’s sunniest and most “classical” symphony, and there were glimpses of lightness in the CSO’s interpretation. However, despite moments of great tenderness and sensitive dynamic contrast—as well as laudable solo contributions by former principal oboe Alex Klein and first-desk violinists Robert Chen and Stephanie Jeong—generally leaden tempi kept this interpretation disappointedly earth-bound.

The selection of Italian soprano Rosa Feola as the fourth-movement vocal soloist also proved mixed, and it raised questions about the importance of character in concert music like Mahler’s Fourth. Feola’s voice is dark-hued and rich, though the mezzo tendencies of her voice sometimes meant she was drowned out by the orchestra. While vocally secure, her smoky, almost sexy delivery seemed incongruous with the text’s awed, childlike depiction of heaven.

Interpretive incongruities weren’t limited to the evening’s soloist. Though Muti is a compelling interpreter of Berlioz, Scriabin, and Respighi, and undoubtedly one of the greatest Verdians of our time, for this critic, his interpretations of late-century symphonic greats leave something to be desired. I am more often puzzled than deeply moved by the maestro’s Tchaikovsky and Mahler, and indeed, at Friday’s concert, the tempi for swaths of the Tchaikovsky pieces were almost metronomic, with too little emphasis on the “fantasy” of these fantasy-overtures.

The pacing of Mahler’s Fourth also seemed off: from beginning to end, Muti favored a practice-tempo-steady reading, which translated into heaviness at some points and stiffness at others. Reining in one movement or section can yield fascinating interpretive insights, but to take a whole Mahler symphony at a universally placid tempo—mercurial emotional shifts and all—deadens its impact.

Muti’s bulkier interpretation of the Fourth finds good company in those by acclaimed Mahlerians like Maazel and Klemperer, and these criticisms come from a listener in the Bernstein, Tilson Thomas, and Abbado camp. But, for this reviewer, Friday’s performance largely brought to mind a line from Richard II: “Keep time: how sour sweet music is,/ When time is broke and no proportion kept!”

Muti leads the CSO in performances of the Tchaikovsky and Mahler program through Sunday, April 24. $15 student tickets are also available for Verdi’s Falstaff on Tuesday, April 26. Non-student pricing and other information available online at cso.org.