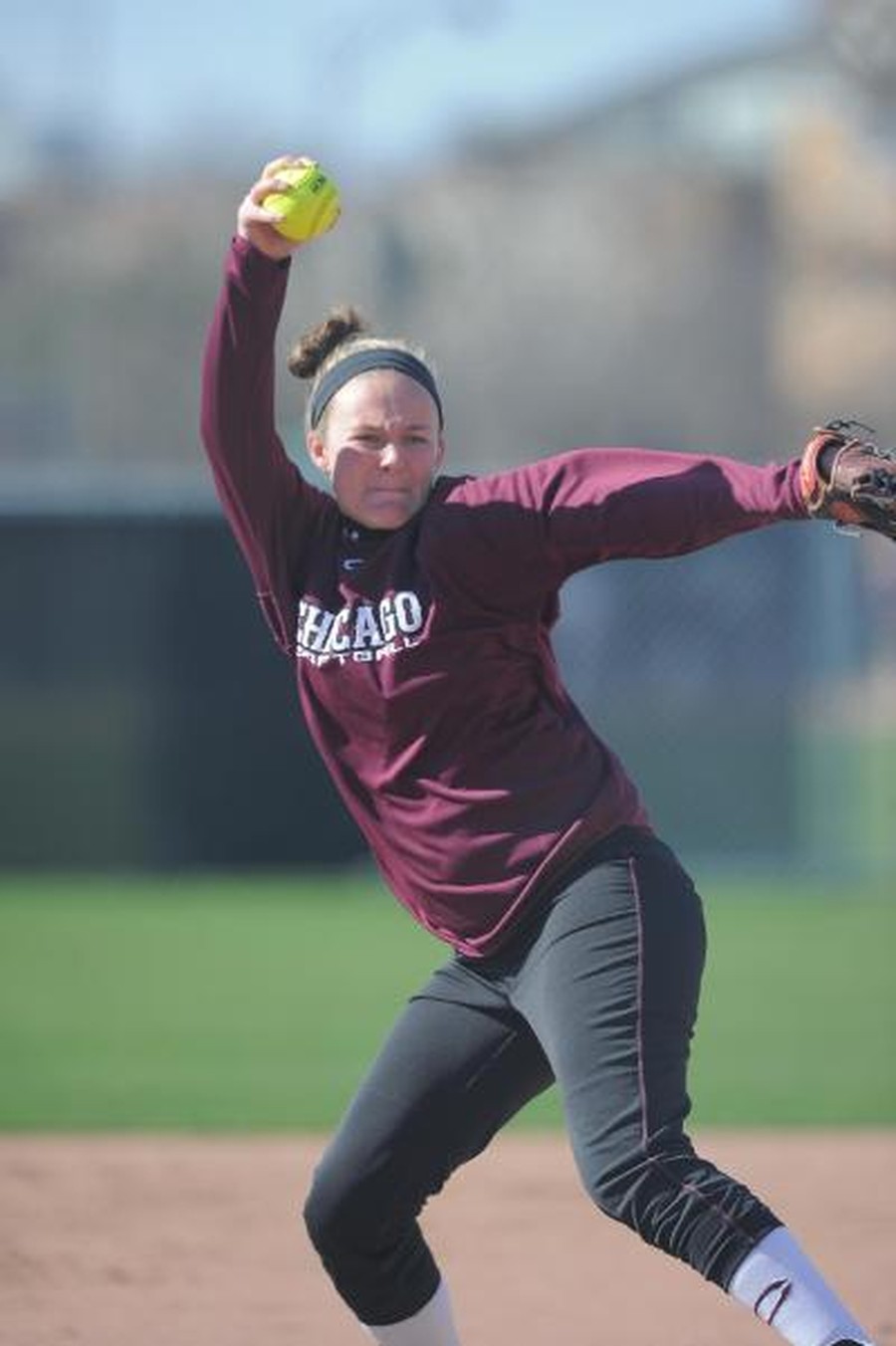 Jordan Poole delivers a pitch earlier this season against University of Wisconsin–Whitwater.

Fourth-year softball star Jordan Poole is approaching her final days on the mound for the Maroons and is certainly going out in style. The pitcher set records just last week, throwing a no-hitter against Hope College to lead UChicago to victory. Even more impressive was that the no-hitter was not her first: she also allowed no hits against Carthage College on March 23, 2014 in her sophomore season. At the end of her third year, with still one full season to play, Poole ranked eighth in the UChicago record books for her 30 career wins as a pitcher and seventh for 267 career strikeouts. Poole’s status throughout her senior campaign has only improved and she will soon leave Hyde Park as one of UChicago’s most accomplished pitchers to date.

Poole comes to the South Side from her home in Austin, TX, where she became involved in athletics at a young age. “I first started playing softball around five or six because my dad wanted me to get some experience with team sports before starting basketball, his (and my) favorite sport to play. I played volleyball for a bit, but mainly basketball and softball before I was forced to realize in high school I was never going to be fast enough to play basketball at a high level.”

Speed has definitely not held her back as a collegiate softball player, as she made an immediate impact on the program upon her arrival to the South Side. In her rookie campaign, she started 15 out of 16 games pitched, striking out 79 batters in 89 and two-thirds innings played. Her productivity was not limited to the mound, as she had a 0.302 batting average, one home run, 13 RBI, and a team-best 15 walks in her first year wearing maroon.

From there, Poole continued to improve. In her second year, she compiled a 15–5 record with four shutouts, a no-hitter, and 119 strikeouts in 128 and one-third innings. Her performance landed her a UAA Athlete of the Week Honor, as well as NFCA Third Team All-Region recognition. In her third year, she started 15 out of 17 games and pitched 69 strikeouts, earning her UAA Pitcher of the Week status.

Despite her individual successes, Poole’s best memory on the field comes from her team’s accomplishments, not her own. “I think my most memorable moment from softball thus far would have to be making it to regionals my second year,” she said. “I remember sitting and waiting anxiously with everyone to hear our name be called, and it was such a great feeling to see ‘Chicago’ come up on the board. I’m hoping for a repeat of the experience this year.”

Her goal for this year’s squad just may come true, as the team now boasts a winning record of 20–6, on the path to be UChicago’s best team in Poole’s four years.

Poole’s impact is not limited to the field. The Law, Letters, and Society major has made her known on campus as more than just an athlete. Off the mound, Poole is a member of Delta Gamma, a tutor and coach for various organizations, and an executive member of the Women’s Athletic Association,

Additionally, the Dean’s List student earned UAA All-Academic honors in all three years that she was eligible. Poole is also a student in the M.A. Program in the Social Sciences (MAPSS), a one-year selective program offered at the University for students concentrating in anthropology, economics, history, political science, psychology, sociology, or in interdisciplinary research. Currently, Poole is working on finishing her M.A. in the MAPSS program, in addition to writing her B.A. Her M.A. thesis is on Iraqi refugee admissions after September 11, 2001.

After graduation, Poole will continue working for Stratfor’s security team, doing research and analysis on terrorism and organized crime. She will spend most of the year abroad, traveling from Indonesia to Kenya, in order to gain more international experience while working full-time.

With just a handful of games left in her college career, and only five short weeks before graduation, Poole imparted a word of advice for the athletes she will leave behind. “My advice would be to take some time and remember what it was like to play your sport at nine or 10, and to channel that excitement every day,” she said. “I know for me personally, and for many of my athlete friends, it is really easy to get bogged down in a cynical and negative mindset when it comes to so many things here. But this is something we worked our entire lives to be able to do, and it should be fun. At the end of the day, participating in athletics is something we should enjoy and be grateful for, not another chore to knock off our to-do lists. I have so many things to be grateful for at UChicago, and my experience with softball is definitely at the top of the list.”