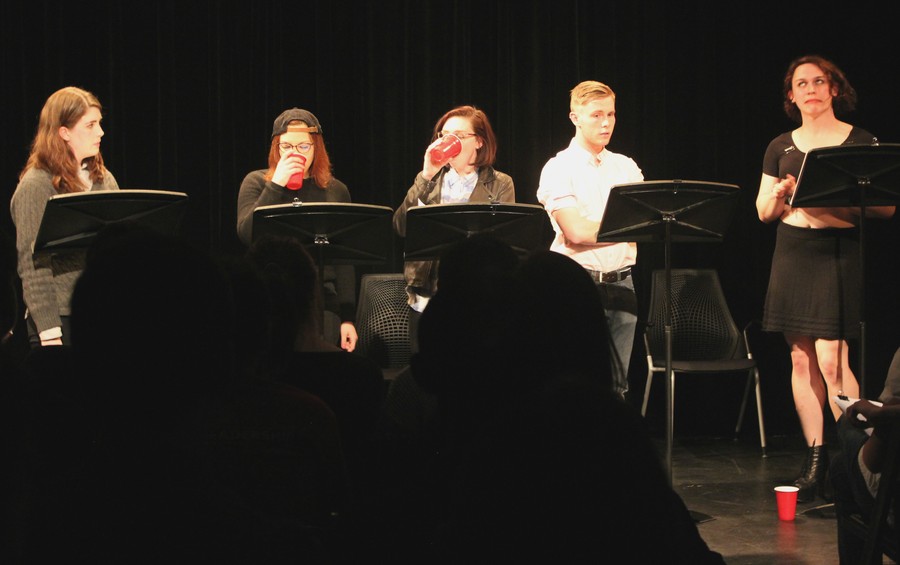 Fourth-years Elisabeth Del Toro and Cynthia Campos-Costanzo and second-year Grace McLeod each premiered their respective work at the Logan Center this Friday, as part of University Theater (UT)’s New Work Week. Each student made use of a unique medium to tackle deeply relevant topics, such as religion, gender, and sexual assault.

In her one-woman Theater and Performance Studies (TAPS) B.A. performance, The Perfect Woman, Elisabeth Del Toro constructs the wholesome alter ego of a vlogger named Kayley Taveras who begins a quest to write a musical about the titular “perfect woman.” What originally seems to be a story about femininity and the actress’s personal struggle gives way to an outstandingly intimate gaze into Kayley’s life. From the high of Kayley buying her first guitar, to the low of her relationship with her mother, one is drawn into the nuanced life of a vlogger trying to accomplish her dreams in the mercurial face of reality.

Particular credit is due to Del Toro’s acting prowess. In the blink of an eye, Del Toro transitions from a saccharine playwright celebrating a new accomplishment to a melancholy child, swamped in her own morose circumstances. It is near unbelievable that Kayley is not a real person, with the way Del Toro captures her character down to the smallest of details.

The video blog medium gives a sense of intimacy unobtainable in traditional theater.  It removes all the barriers between the viewer and the performer, allowing the viewer to personally take in Kayley’s deeply personal monologues. By distancing itself from the standard presentation of theater, the performance allows the viewer to forget the theatrical nature of it all and devote all attention to the character center stage.

“It gave her the opportunity to monologue without it feeling contrived. She was able to talk to herself in a candid way,” said Emma Maltby, a second-year in the audience.

Cynthia Campos-Costanzo’s TAPS B.A. performance took a completely different approach to storytelling. Her B.A. was a goofy, modern retelling of the well-known story of Moses and his Jewish brethren. This updated story, supported by meticulously choreographed shadow puppets, gave the piece an approachability lacking in the Old Testament’s original. Most importantly, it left me wanting to watch Veggie Tales again.

Second-year Grace McLeod’s 80-minute play, Girls Drink For Free, did not explore alternative performance methods like the other two pieces. However, this is by no means an omen of lowered quality: it doesn’t search for alternative methods because it does not need them.  While simply a read-through rather than a performed play, Girls Drink For Free strikes thoroughly into the ever-present issue of sexual assault on campus.

Rape: It’s a core problem in society, distilled into the nooks and crannies of college life. Girls Drink For Free explores the half-stigmatized, half-sensationalized leviathan of an extremely publicized rape case. In a show of blinding ambition, the play attempts to fully take on the varying perspectives of such a case. Does it succeed? Maybe. Tackling such a highly controversial topic is bound to bring both critics and supporters, regardless of the material.

Even so, McLeod attempts to cover the entire situation. The world of Girls Drink for Free consists of dark gray, and equally dark is its message: it showcases the rampant hypocrisy and selfishness of its characters, with an overarching focus on an inherently flawed system.

Not a single character in this play is likeable in the broadest meaning of the word, from the neurotic, unstable Leah to thoroughly unpleasant Sonya. McLeod’s skilled writing keeps the unrepentant cast in check, which allows us to hate them while still being absorbed in the play. This virtual lack of positive character qualities helps flesh out the idea that there are no winners and no bright side to the situation.

The play excels in its focus on the deep flaws of universities’ sexual assault policies, rather than imposing an ideal onto the viewer. It is ultimately up to the viewers to decide their own justice.

“These situations are convoluted. Unless you’re one of the people involved, you don’t know what happens. No one knows,” McLeod said. “Not a single person in the play knows what happens.”