Returning to Her Roots, Sarah Howe Finds Poetry in Pilgrimage 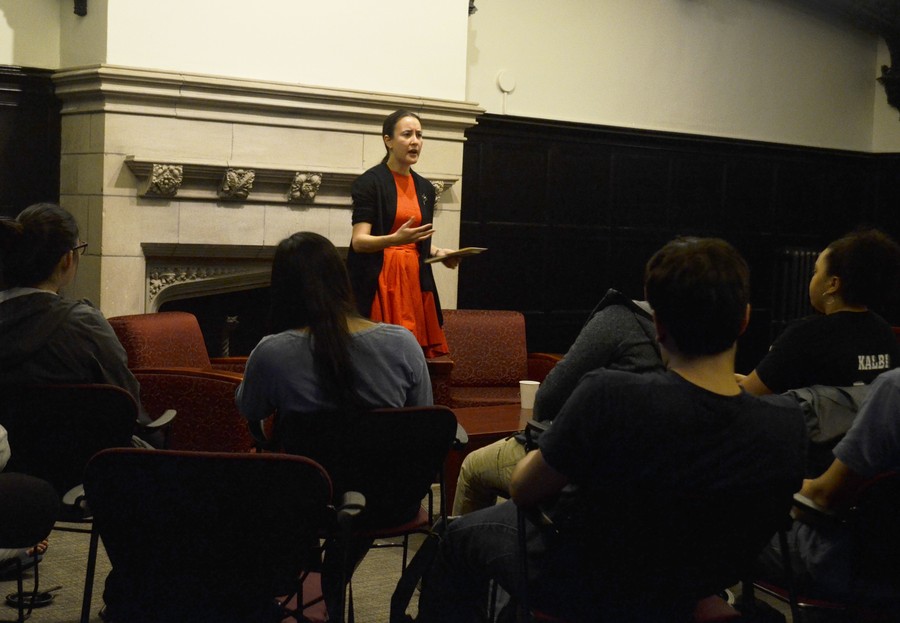 British-Chinese poet Sarah Howe is many things: the founder and editor of online poetry journal Prac Crit, a judge in the National Poetry Competition held annually in the U.K., and the winner of the 2015 T.S. Eliot prize, to name a few. Yet it was only after she finished writing Loop of Jade—10 years in the making—that she started calling herself a poet.

Last Thursday, Howe spoke in the South Lounge of Reynolds Club in a talk entitled “Between the Occident and the Orient.” The event was organized by PanAsia and Blacklight Magazine and funded by Student Government and the Program of Poetry and Poetics.

Howe told the audience that she did not begin writing poetry seriously until she came to the U.S. as a 21-year-old, when she won a scholarship to study at Harvard for a year. While in the U.S., Howe decided to explore classical Chinese poetry for the first time. She had moved from Hong Kong to the U.K. at age seven, but the experience of moving to a new country made her feel like a foreigner again.

“It switched something in my head,” she recalled.

From there, Howe decided to travel to China, making what she called a “pilgrimage” to see the country where her mother was born. It is fitting that Howe should use this word, because as she noted during her talk, writing Loop of Jade was “a literal journey.” Poems in the collection, such as “Crossing from Guangdong” and “Islands,” directly chronicle her travels. “Islands” begins: “At the boarding school we used to chant them/ Ping Chau, Cheung Chau, Lantau, Lamma.” Later in the poem, she writes, “My heart was drowning–the long anticipated sight/ of home.”

“It was strange being foreign in my point of origin,” Howe remarked about going back to China.

Yet she is no stranger to the feeling of “being foreign.” She has always been fascinated with what she calls the relationship between “sound and sense”; as a child, she would hear her relatives speak Cantonese but be unable to make sense of the sounds around her. “[I thought of] language as a musicscape whose meaning was hard to push into,” Howe remembered.

Ironically, Howe’s British teachers assumed that she was not a native English speaker because of her Chinese heritage. They even told her mother to send her to speech and drama lessons, where she and other Asian students would learn to “perfect” their English accents by reciting poetry. These lessons exposed Howe to literature at an early age, and she did not think twice about studying it at university.

Yet the kind of discrimination she faced at school would manifest itself in more serious forms when she became an adult. Howe mentioned that a critic once said that he could not follow her poem “Yangtze” because she introduced the collective pronoun “we” into the lines.

“It is easy for an unmarked male poet to assume a sort of universality,” Howe said, “[whereas I can be read as] a female writer trapped in the particularity of my viewpoint.”

Howe said she did not use “we” in the poem to exclude readers; in fact, she intended the opposite. “I think of it as an invitation in the poem for us all to stand together in our differences under an umbrella for a spell and shelter there.”

“Something sets us looking for a place,” she writes in “Crossing from Guangdong.” Thursday’s event affirmed that Howe’s poetry can be that umbrella, providing a “place” for the placeless.